The gloves are off in one of swimming’s most bitter rivalries, with Australia’s Mack Horton protesting controversial Chinese star Sun Yang’s 400m freestyle victory at the world titles in South Korea.

Sun pipped Olympic champion Horton by 0.73 of a second to claim his fourth-straight 400m freestyle world title at Sunday’s opening night of the eight-day championships.

But Horton made it clear he was not happy Sun had been allowed to compete, refusing to shake hands or stand on the medal podium with the three-time Olympic champion.

Horton collected his silver medal but then stood back and refused to acknowledge Sun who stood with bronze medallist Gabrielle Detti of Italy on the podium.

Sun was surprisingly cleared to contest the titles while waiting to appear in September at a Court of Arbitration for Sport hearing.

The 10-time world champion will answer charges of smashing vials of his blood with a hammer during a clash last year with testers.

Sun celebrated wildly after the 400m win, splashing water and holding four fingers up to indicate his streak.

But Horton was clearly not impressed, taking a swipe at Sun via the media before his podium protest.

Asked how he felt after a gutsy silver-medal finish, Horton said: “Frustration is probably it.

“I think you know in what respect.”

Asked to describe his rivalry with Sun, Horton said: “I think you know what the rivalry is like.

“His actions and how it has been handled speak louder than anything I will ever say.”

Sun returned serve in a post-race press conference, accusing Horton of being disrespectful.

“I was aware that the Australian athlete had dissatisfaction and personal feelings towards me,” he said.

It marks the latest round in Horton’s row with Sun whom he dismissed as a “drug cheat” at the Rio Games before upsetting the three-time
Olympic champion to claim 400m freestyle gold in Brazil.

Sun has been a controversial figure since serving a secret three-month doping ban in 2014.

The Chinese swimmer was again embroiled in scandal when he was accused of objecting to an out-of-competition test last September at his
Zhejiang home before the vials of blood were allegedly destroyed by a hammer.

World governing body FINA opted not to punish Sun amid claims the testers had not shown adequate identification but the World Anti-
Doping Agency lodged an appeal to CAS.

Horton could at least take solace from his silver medal finish at a world titles that, by rights, he shouldn’t be contesting.

Horton failed to qualify for an individual event at last month’s world titles trials but was selected for the championships thanks to head coach Jacco Verhaeren’s discretionary powers. 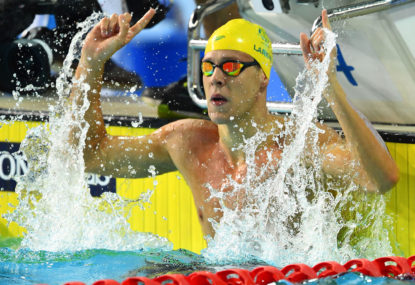 Embattled Australian swimmer Shayna Jack will be suspended from swimming for four years if she fails to prove her innocence in a doping scandal, according to The Daily Telegraph. Jack made headlines late last week after testing positive to banned substance Ligandrol, a muscle-building drug. Richard Ings, the former chief of the Australian Sports Anti-Doping […]

The heat may be on Swimming Australia (SA) over their handling of Shayna Jack’s doping drama but the governing body’s CEO Leigh Russell says the sprint star only has herself to blame over her positive drug test.