How do you feel? Turbo drives a Brookvale renaissance

“So here we go again Manly and Parra…” remember the jingle back in 1984?

If, like me, you were around for the airing of that Tooheys beer commercial, you probably have a seniors card or at the very least are waiting at the window for the postman to turn up.

It was Manly versus Parramatta, when the Sea Eagles were the rich kids and the sworn enemy of all other rugby league fans. The ‘Winfield Cup’ was all about NSW and particularly Sydney.

The ‘westies’ of Parramatta were the power team of the early ’80s and the scenario of the beer advertisement was a topsy-turvy battle before the great Ray Price seals the victory with a try for the Eels.

Forgive me for delving even further back into the warm and cloudy waters of nostalgia but I will get to the point eventually.

In the mid-1970s, as a school kid saving up to buy Amco Bogarts and Golden Breed Silky Hawaiian shirts, I worked for an ice cream vendor at Brookvale Oval. I was always a better spectator than a Chocolate Heart salesman.

My boss chided me a few times for staring mesmerised by the game with a portable esky strapped over my shoulders when I should have been spruiking the Drumsticks.

Regularly taking my attention away from the job at hand was the magical play of a local surfie-looking type, socks down, head held high as he glided into open spaces. It was halfback Johnny Gibbs, who would play more than 80 games for the club before injury prematurely cut his career.

What struck me at the time was the ease and relaxed way Gibbs seemed to go about his business. It was like he was playing with his mates in the school-yard, taking a few risks and making it up on the run.

Thirty-five years later – seeing Manly put the cleaners through the Eels at Brookie in front of over 15,000 fans with a young Tom Trbojevic playing a starring role – I was reminded of Gibbs running riot at the Sea Eagles’ home ground.

Brookvale is a venue that hasn’t changed much over the years, save for the Ken Arthurson stand opening in 1995.

Trbojevic is not a halfback and at 1.94 metres is a good deal taller than Gibbs, but there is something about the way they bring a ‘Sunday arvo at the park’ attitude in the Manly jersey that sparks the comparison. 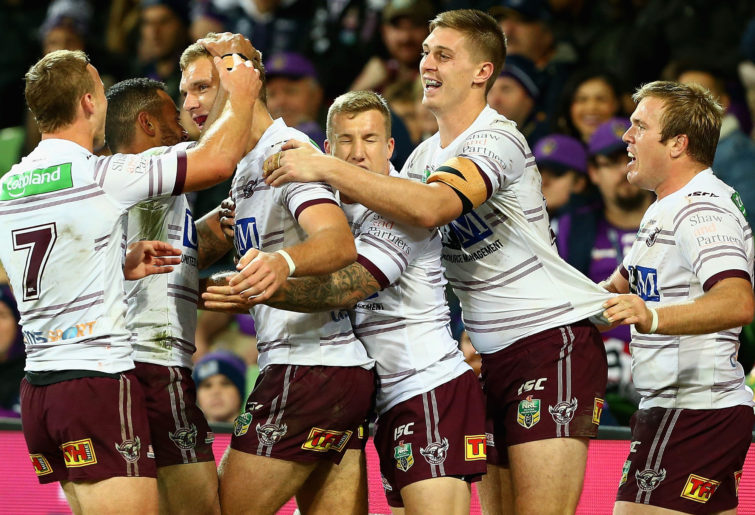 The fullback’s exceptional talents have been on display at Brookvale for the last few years and despite some recent injury issues he has almost played as many games in the maroon and whites as Gibbs during his whole career.

This year Tommy Turbo has taken his game to another level. If it wasn’t for James Tedesco arguably being the best player in the world at the moment, we would be hailing the dawn of another great Aussie fullback.

He is eligible to play for emerging rugby league nation Serbia under the ancestry rule, as Tedesco did with Italy in 2017, but that is unlikely to happen anytime soon, given his versatility that was on display during his Origin performances for NSW.

At present, he would walk into the Australian team at either centre or wing. No arguments. He has to be there.

His performance last Sunday in the 36-24 win over the old foes had a bit of everything. The numbers tell you that he scored a try, performed a try-assist, and ran for 269 metres – the most of any player on the field. He also made five handling errors. You are going to get that with Tom.

Unlike the old Tooheys commercial, a bomb put up by half Daly Cherry-Evans proved spectacularly successful after Trbojevic screamed through and stole the ball from the arms of Clint Gutherson in mid-air to give the home side the lead.

It demonstrated why the Sydney Swans were interested in signing him when he was part of their academy.

Despite coming through junior development systems that emphasise the importance of structure and minimising errors, Trbojevic still experiences ‘rushes of blood’ that compel him to try something out of the ordinary. Let’s all hail the footy gods for that.

Coach Des Hasler told media after the game that Trbojevic’s performance was “like being in a lolly shop”.

“What was on display there today was probably too much but what he comes up with just off the cuff is really important and you need that against the top sides.”

The Sea Eagles are sitting just above the Eels, in fifth spot. They have managed to find consistency on the back of a few quality players supported by ‘panel beaters’.

Winger Reuben Garrick was plucked out of St George Illawarra’s lower grades. He celebrated a hat trick of tries on the weekend.

The Trbojevic boys are Manly through and through and club management need to find a way to retain them for life.

An acquaintance and diehard Sea Eagles fan lamented on social media that after 28 years of going to Brookie, the beer queues were still ‘ridiculous’ at the old suburban ground.

And so the memories keep flooding back.