As 1942 began, the Vichy French controlled Madagascar. The Imperial Japanese Navy planned to use the ports of this perfectly-placed island to cut off the Allies’ shipping routes, and rule the entire Indian Ocean.

Operation Ironclad was launched by Winston Churchill on 5 May 1942 to seize the northern port of Diego-Suarez by amphibious assault, followed by a campaign to secure the entire island. Churchill could call upon a vast array of resources from the Commonwealth, but staging the remote invasion was complex.

Reconnaissance was done for months by the South African Air Force. A fleet was assembled in Durban, amidst pessimism. But the landings were met with little resistance. The battle for the base of Antisarane, surrounded by trenches, pillboxes, and swamps, bogged down. A Marine landing broke the deadlock.

For the next four months, South African and Rhodesian brigades took the island piece by piece, just ahead of the rainy season. The Vichy forces surrendered in November. The Allies used Madagascar as a launching pad for the rest of the war, controlling passages to India and Persia, containing Japan.

The stakes are infinitely lower, lives are not at risk, and the weaponry is far more benign, but Springbok coach Rassie Erasmus is staging a clever campaign to take the Rugby World Cup in Japan ahead of four more favoured powers: odds on New Zealand, 4-1 England, 5-1 Ireland, and 7-1 Wales.

After seeing off the Wallabies at Ellis Park (35-17), his Boks have three more matches to be ready for the quarter-final defining clash on 21 September in Yokohama against the All Blacks: aptly enough, the ‘practice’ Tests are against New Zealand this weekend, and then two in a row against the Pumas, in August.

In the big tournament, Erasmus’ team will desperately want the win in Pool B’s first fixture, to draw Scotland instead of Ireland in the quarter-final. Pool matches against Namibia, Italy and Canada thereafter will afford an ability to use squad depth to keep key starters fresh for the knockouts against dangerous Celts, the English or Australians, and if successful, probably a rematch in the grand finals against the Kiwis.

To that end, Erasmus has constructed an ingenious plan. He named an experimental side to face the Wallabies, and dispatched ten key starters to New Zealand a week early to get the jump on Steve Hansen who would be in Latin America and try to boost confidence for Pool B Match One, knowing it could all blow up in his face. The squad was divided into three travelling groups; and camps were ‘accordianed.’ 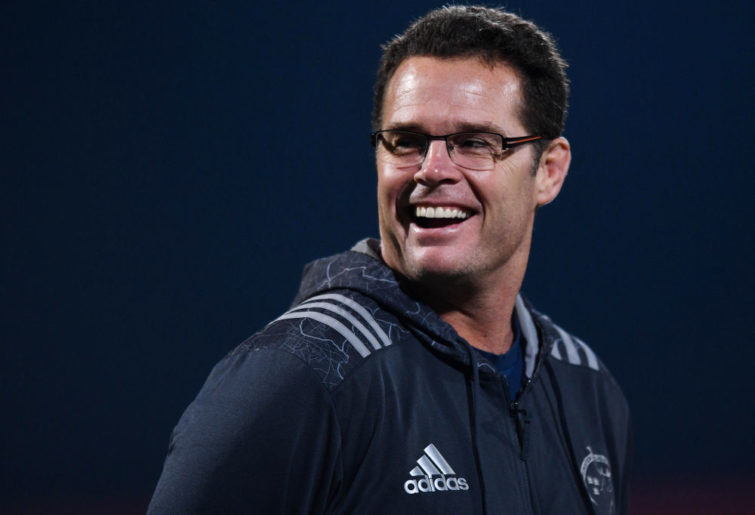 But on Saturday morning, Erasmus may have found his porridge unsettling. What if his ‘B’ team came unstuck? Lood de Jager had only played part of a Currie Cup match and was facing one of Super Rugby’s form locks, Rory Arnold.

Elton Jantjies is mercurial, to say the least, and would be playing with a 23-year debutant and namesake, in front of merciless Bok fans, against some of the most experienced 9-10 operators in world rugby. His loose trio seemed ponderous: rookie Rynhardt Elstadt, the world’s biggest openside, Pieter-Steph du Toit still not accepted by many as a flank, and old Francois Louw at 8.

If the Boks lost to Michael Cheika’s Wallabies, and then did the usual thing by losing in New Zealand, with a rampant Pumas side in waiting, Bok confidence would be in tatters, just when vibe and mojo and attitude was vital. Had Rassie outfoxed himself?

But we now know that the Jantjies duo – with a massive cameo by Frans Steyn, who looked like a prop but played like a possessed Viking invading a land full of milk and honey – outplayed the more touted Wallaby halves. The young rookie scrum half found his inner Joost both on attack and defence, throwback Flo pinched three turnovers to rule the fetcher contest, the whole pack fired at scrum (if not at lineout), and Elstadt annoyed the Tongan Thor enough to get cleaned out after the whistle, leading to a precious card.

But much like the Madagascar invasion: did the Wallabies put up enough resistance to learn much? The Wallabies seemed a bit weak or tired in the contact area, running listlessly and upright into at least 17 dominant tackles and another dozen ‘chokes.’ The excellent Nic White was forever marshaling attacks behind the gain line, sometimes for six or seven phases before being turned over. Bernard Foley was just smashed, all game: by Andre Esterhuizen, Eben Etzebeth, Elstadt, and then French Fries Frans.

Sekope Kepu folded early and often, and shrugged at referee Paul Williams, as if to say: ‘Yes. It’s me.’ 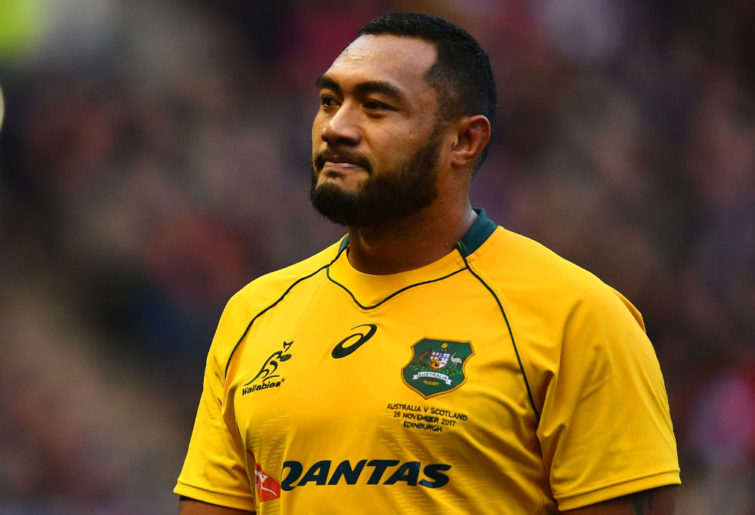 Whilst a few inside or flat balls led to line breaks (two butchered in excruciating fashion, by Dane Haylett-Perry and Samu Kerevi), there were five times as many that led to being driven backward at a rate of knots, or knocked over, or being choked and stripped by seriously amped up Boks competing for a place on the plane to Tokyo.

The main problem looked to be tired Wallaby legs (upright running, the ‘tell’), but on review, I changed that to poor Aussie breakdown protection, sloppy recycling, strange angles to the ruck, and indecision by ruck cleaners and joiners like Izack Rodda, Lukhan Salakaia-Loto, and Folau Fainga’a, as well as a complete failure by Michael Hooper to make a concomitant impact on the Bok ruck.

So, although Erasmus did benefit from this ragged first Test by probably nailing down his three World Cup scrum half depth chart, confirming that Fat-but-Fit Frans still has ‘it’ (he carried Wallabies in the tackle three times, drove the ruck that created the blind snipe, and offloaded to set up the S’bu Nkosi try), celebrating a great debut by Bulls loosehead Lizo Gqoboka, and being vindicated for naming the first majority non-white team to beat the Wallabies in history; he won’t read too much into it.

He will know that Ben Smith won’t futilely join a ruck to try to overpower a Saffa forward, leaving the blind channel open. Rassie won’t expect Bender to fumble a try-line sitter.

Beauden isn’t Bernard when it counts, Retallick isn’t Rodda leaving the door open for Pieter-Steph du Toit, and while Owen Franks is just as malicious as any great prop, he probably won’t clean a Bok out after the whistle for an All Black turnover.

The All Blacks and Ireland won’t offload aimlessly, and their coaches, Hansen and Joe Schmidt, won’t speak of being ‘happy’ after a loss.

But Erasmus would have loved the spirit, the mongrel, the clinical finishing, most of the box kicks, and the result. He can tick a few boxes, or shade them in halfway:

1. His scrumhalves need to be fast, play fast, and be disruptive, but pinpoint on box kicks. He has four.
2. His rush-umbrella defence looks like it can bother anyone, but still needs situational awareness work.
3. He’s loaded with test-ready props and locks: four or five deep.
4. Loose forwards: he can mix and match horses with courses, with the likes of chip kick PSDT, tearaway Kwagga Smith, old faithful Flo, pilferer-warrior Thor, and other blends.
5. He knows exactly who his playmakers are, he trusts his backup 10, and he knows who his wings include. 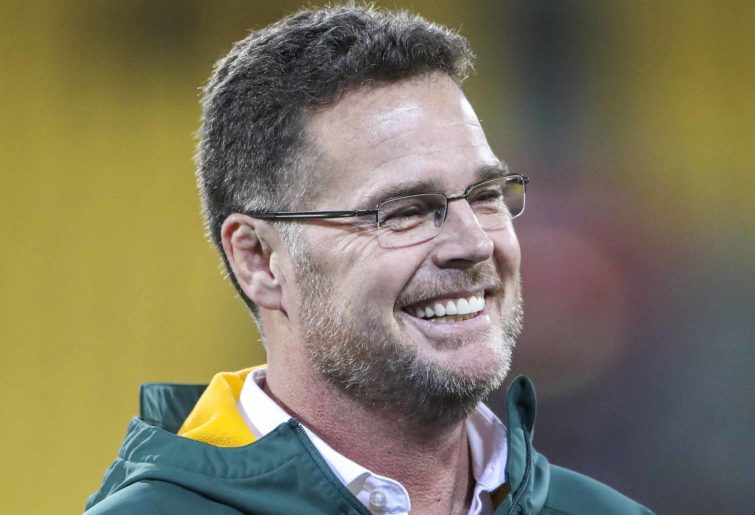 The unanswered questions are problematic, though:

1. Who is the Bok 12? Flaky Damian de Allende, thick Esterhuizen, or the X-factor Frans? Serfontein?
2. Who can play 13 with which 12? Jesse Kriel doesn’t read play as well as Lukhanyo Am, but who combines with who, best? The 13-read is not working: the Wallabies strolled through the open gate.
3. Who is the third string Bok flyhalf and placekicker if we go into Stephen Donald territory?
4. Who is his number 23 in a knockout match?
5. Who is the skipper if Siya Kolisi cannot make it back?

Answer these four questions, and against the odds, the main island of Japan could be yours, Rassie Reconnaissance.