Coming off a demoralising 18-point loss, the Wallabies need to get back to winning ways against the Pumas when they meet at Suncorp Stadium.

The Wallabies find themselves in last place after the first round of a shortened Rugby Championship. Not only did they lose at the weekend, but tonight’s opponents, the Pumas, claimed a bonus point in their defeat at the hands of New Zealand, lifting the Argentines off the bottom of the ladder.

The losses mean Argentina are out to snap a six-game losing streak, while Australia will look to avoid their third consecutive loss. Suncorp Stadium is something of a fortress for Australia, however, with Michael Cheika’s men chasing a fifth consecutive victory at the venue.

Head-to-head, Australia have won seven of the last eight, although Argentina beat the Wallabies last year on the Gold Coast. The return match was dominated by Argentina in the first half before the Wallabies thundered back for a 45-34 win. Nevertheless, Argentina were the better team as a whole in the two games. 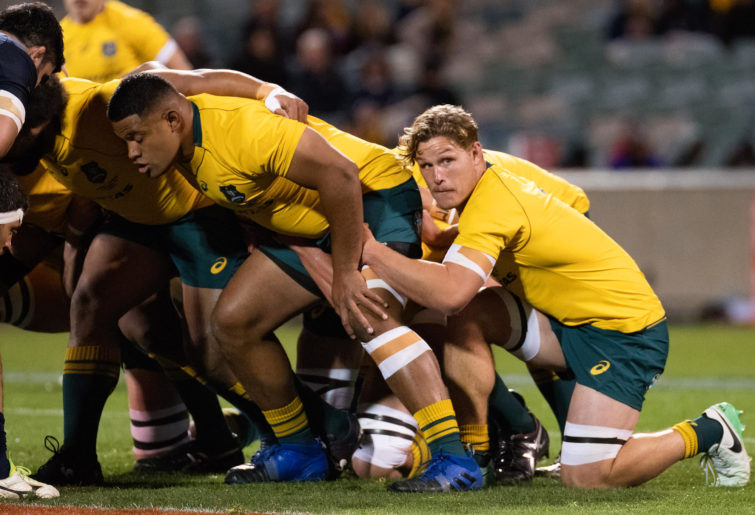 Both losses were at the hands of ‘B teams’. New Zealand opted to rest a number of players, as is their habit when they play Argentina, while Rassie Erasmus chose to split up his squad, sending his best footballers to New Zealand early, but he still got the job done over Michael Hooper’s men.

Although unlikely, the Wallabies can win the Rugby Championship from here. They need to win tonight, preferably with a bonus point while keeping Argentina from clinching one. They’d want New Zealand to beat the men from the Republic by eight or more yet miss out on the bonus point, and then they’d need the Pumas to knock over the Springboks. Not to mention they’d need to beat New Zealand, but they wouldn’t need to beat them by much.

Although Mario Ledesma has made five changes to the team that lost 20-16, it remains loaded with Jaguares players. Australia will be breathing a sigh of relief after the Pumas coach rested Emiliano Boffelli, a player who can kick goals from anywhere in the attacking half.

Regardless of this, Australia will still need to be very disciplined. The yellow card to Taniela Tupou last weekend was a big part of Australia’s loss. Let’s remember, though, that Argentina often struggle with the number of penalties they give away, so this could be a point of difference for the Wallabies.

While Australia had a terrible day out when they played the Boks, the backline wasn’t one of their woes. With a floundering forward pack, the backline remains Australia’s last hope.

How will Argentina deal with this? They’ll know from their video review that the Boks shut down the Wallabies by not kicking long when they had to kick and instead putting up box kicks or looking directly to touch. This meant that the Wallabies backs only relied on getting the ball after a set piece and had nowhere near as much room as normal.

But the Pumas were happy to hoof it downfield against the All Blacks. If it didn’t cost them against New Zealand, albeit a B team, wouldn’t it be effective against Australia? Only time will tell.

Maybe they’ll reason that if they can shut the Aussie backs down, the forwards will struggle for gain-line success against a set defensive line, so putting them back inside their own half isn’t a bad idea.

The set piece could also decide this game. Australia’s lineout stayed strong throughout last weekend’s game and their scrum improved as the match wore on. Argentina’s scrum isn’t what it used to be, but Guido Petti will be a threat at lineout time. He can claim to be the player with the most lineout steals in Super Rugby, so Izack Rodda and Rory Arnold will need to be wary.

Cheika has made just one change to the forward pack which battled to make metres against the Boks, with Scott Sio slotting in for James Slipper, who drops to the bench. They’ll need to have a much better game both in attack and defence.

Prediction
Australia can win this, but so can the Pumas. You’d have to back the hosts at a venue where they’ve had so much success, but it won’t be by much.