Despite a couple of close losses, Rhyce Shaw and his troops have been largely praised since turning around a dire start to the season.

This was after some doomsday reporting early in the season, suggesting that the playing list needed a clear out.

However, North should be careful not to make a rash decision to either coach or playing list.

While Shaw has clearly given his players motivation and direction, interim coaches only have to step in the door to change the momentum of the team.

Paul Roos suggested players often treat a change in coach as a fresh start, and it forces them to switch on. Of the three most recent caretakers who have later been appointed full-time, two had immediate success as caretaker.

Brett Ratten took on a woeful side, so he isn’t a good comparison to Rhyce Shaw. However, Mark Harvey and Matt Primus had similar success to Shaw as caretakers, before dramatically falling away the following year.

On the other hand, looking back to the 2000s, there is no clear pattern to suggest North Melbourne should or shouldn’t appoint Shaw. Roos himself was in fact a very successful appointment after being interim coach. 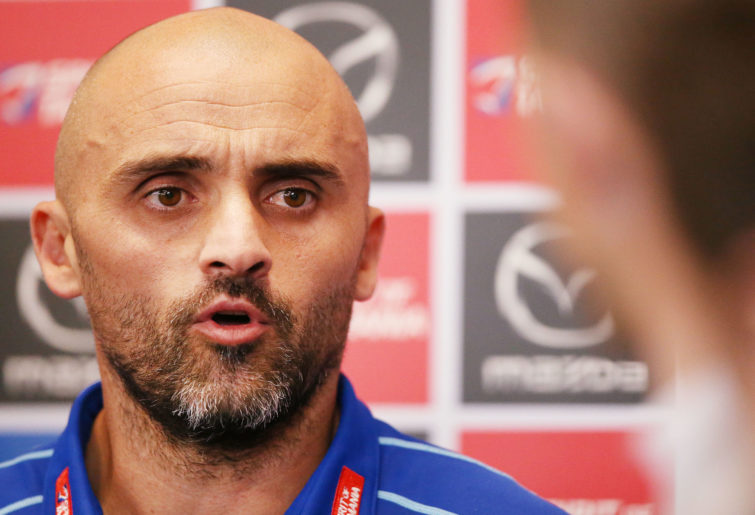 What concerns me about the Kangaroos under Shaw is that the improvement has mostly come from extreme pressure on the opposition. This is hard to maintain, especially the following season when the novelty of having a new inspirational coach has worn off.

Both the Western Bulldogs and Richmond won premierships off unbelievable forward pressure over a four-to-six week period, but were unable to maintain it the following year.

The Bulldogs tumbled down the ladder in 2017, while Richmond’s pressure was the worst of any finals team in 2018. Can Shaw maintain an effective forward press over a long period of time?

The doomsayers should also quieten down, as North has some great talent coming through. The apparent 21-25 age gap will be partly resolved if Jy Simpkin and Jed Anderson continue to develop strongly and if Paul Ahern can combine his 2018 form with more defensive nous.

Add in potential superstars Tarryn Thomas, Nick Larkey and Luke Davies-Uniacke, and North should have no trouble replacing their experienced top-liners.

Thomas is the real wildcard, as he has already shown regular glimpses of remarkable game sense and balance. There is no need to trade for another high draft pick – it will only make it harder for these young stars to develop.

Shaw has done a great job so far inspiring his players and bringing out some great performances from those youngsters. To make sure this young talent is nourished, North should be careful to consider who has the strategic nous to fit the puzzle pieces together over the long-term. If that man is Rhyce Shaw, he could just be the next Paul Roos.

Key defenders
A slight concern when Scott Thompson retires, as McKay and Durdin are yet to perform at AFL level. Tarrant should still be around, while Vickers-Willis can play as third tall if fit.

Small and medium defenders
Brad McKenzie and Mitchell Hibberd didn’t work out, so a good kicking halfback will be necessary as Macmillan ages.

Midfielders
Davies-Uniacke and Ahern should peak around the same time as Cunnington and Shaun Higgins tail-off. Ahern is very talented, but needs to work on his defensive game. While he is probably in our best 22 as a half-back or half-forward, North have made to right decision to force him to perfect his midfield positioning in the VFL (in the mould of Tom Mitchell, perhaps).

Simpkin can play forward or midfield, and has already started to show his class at 21. Dumont might eventually take on more inside midfield time to replace the grunt of Cunnington and Ziebell.

Key forwards
Larkey’s breakthrough is a huge step forward, as they hadn’t really found a replacement for Jarrad Waite beforehand. Another mobile forward would be useful back-up to the unreliable Wood.

Small forwards
Thomas has the talent to be the club’s most mercurial player since Boomer Harvey or Daniel Wells. There’s the pressure of Turner, and then there’s Zurhaar, who looks like he will provide a Ziebell-style crash and bash impact for the next ten years.

Rucks
Clearly, Todd Goldstein will need to be replaced, perhaps through the VFL.

Who do they need to draft with their next two first-rounders?
A top-quality halfback is a priority, as Jasper Pittard is only a short-term stopgap. A Tarrant replacement would be handy, while a nimble permanent small forward would provide something a bit different.