AFL Team of the Week: Round 19

A strong yellow and black flavour features throughout Round 19’s Team of the Week.

Back Pocket – Nick Vlastuin (Richmond)
Was part of a tight-knit Richmond defence that completely shut down the Collingwood attacking half on Friday night. Vlastuin racked up 21 disposals, 13 of them contested at a safe 81 per cent efficiency, took seven grabs and laid four tackles. Was also very handy offensively, gaining 554 metres along with eight rebounds from defensive 50.

Full Back – Tom Barrass (West Coast)
Had the job on dangerous North Melbourne forward Nick Larkey and kept him to just one goal. Didn’t get a lot of the ball himself, but when he did, he used it very well, amassing 10 touches at a perfect 100 per cent efficiency. Took five grabs, three of them contested and three of them intercepts, and had a whopping 17 spoils for the match.

Back Pocket – Dylan Grimes (Richmond)
Continued his push for All Australian selection with a superb game on Friday night against the Magpies. Had six rebound 50s from his 14 touches, took eight grabs, three of them contested, and had a total of eight spoils.

Half Back – Kade Simpson (Carlton)
The wily old veteran turned the clock back with an outstanding game against the Crows on Saturday, gaining 591 metres from his 31 possessions which included eight defensive 50 rebounds. Also hauled in 12 grabs, laid three tackles and even got forward to slot a goal. 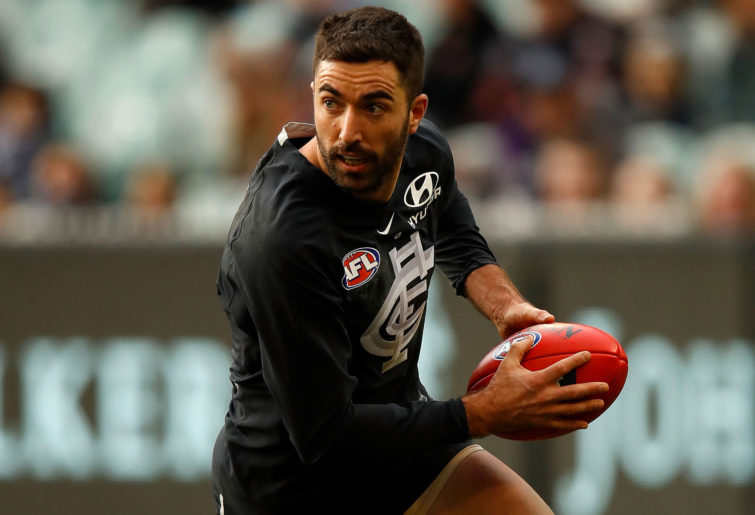 Centre Half Back – Phil Davis (Greater Western Sydney)
The general in the Giants’ backline, Davis was a cool head in a hotly-contested battle between GWS and Port Adelaide. The co-captain had 17 touches at 94 per cent efficiency and took 13 marks, six of them intercepts and two of those were contested.

Half Back – Callum Mills (Sydney)
The 2016 Rising Star winner has had an underrated campaign in a difficult year for the Swans, and it continued on Sunday against Geelong at the SCG. Mills racked up 26 disposals, gaining 567 metres and totalling nine rebound 50s. He also took six grabs and laid four tackles.

Wing – Jackson Macrae (Western Bulldogs)
The unsung hero of the Western Bulldogs midfield was unstoppable on Sunday against Fremantle, collecting 38 touches, 18 of them contested at an incredible 92 per cent efficiency, winning eight clearances, taking seven marks and laying five tackles. He was also very valuable going forward for the Dogs, getting involved in 13 scoring opportunities and gaining 442 metres.

Centre – Patrick Cripps (Carlton)
An enormous game from the Blues’ co-captain puts him right in the mix to win his first Brownlow Medal. Cripps is sure to poll the maximum number of votes from the men in green for his performance against the Crows, amassing 39 possessions, a huge 24 of them contested, and winning a whopping 19 clearances, which is the equal second-most amount recorded in a game of footy since those stats were recorded.

Cripps also took four marks, laid seven tackles, had eight inside 50s and eight score involvements, one of them being a sensational goal scored in the first quarter.

Wing – Jordan De Goey (Collingwood)
Did everything he could to pull the Magpies back into a contest they were never really in on Friday night against a red-hot Richmond. Thrown into the midfield, De Goey collected a season-high 28 disposals, gaining 587 metres helped by 11 inside 50s. He also won six clearances, had seven score involvements, took ten grabs and finished with an inaccurate 1.3.

Half Forward – Dayne Zorko (Brisbane)
The Lions’ captain is putting together a terrific year and it continued on Saturday against the Hawks in Tasmania. Zorko gained a huge 611 metres from his 25 disposals, kicking the ball inside 50 seven times, while he took five marks, laid six tackles and booted two important goals. 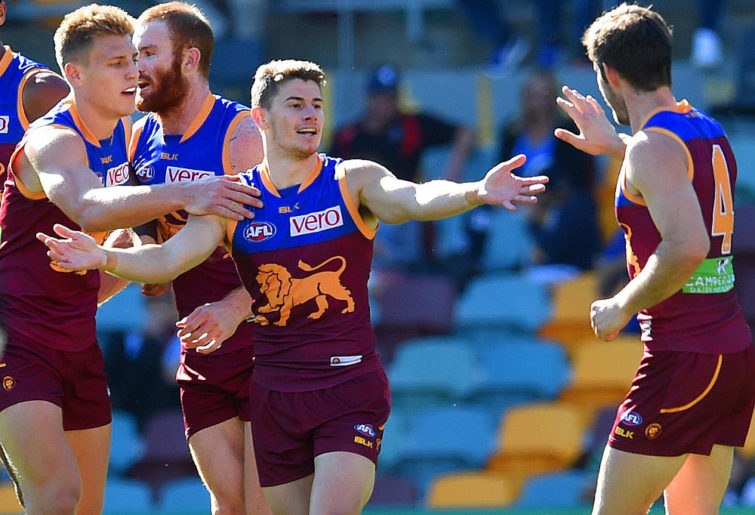 Centre Half Forward – Tom Lynch (Richmond)
Ominous. That’s the word to describe Lynch’s performance on Friday night against Collingwood, with the ex-Sun starring with 16 touches, six marks, four of them inside 50 and two contested, and a haul of five majors. Had a total of 13 score involvements as well, and it is these kind of numbers that have top eight sides quivering at the thought of going up against the Tigers in September.

Half Forward – Dustin Martin (Richmond)
Was huge for the Tigers on Friday night, amassing a monster 38 touches, 14 of them contested, taking six grabs, laying two tackles and slotting two goals. Gained 655 metres on the night, delivered it inside 50 eight times and had 11 score involvements. If the form of Lynch doesn’t scare Richmond’s rivals, Martin hitting full gear certainly will.

Full Forward – Josh Kennedy (West Coast)
Showed there is still plenty of life left in the soon-to-be 32-year-old legs against North Melbourne on Saturday. After kicking just two goals from his last three games, Kennedy slotted a massive seven majors from 11 disposals and eight marks, five of them contested and six of them inside 50. In doing so, he reached the 600 goal milestone and now sits 32nd on the all-time list for most goals kicked. A true champion of the modern game.

Forward Pocket – Tom Hawkins (Geelong)
Celebrated game 250 in style with a vintage performance against Sydney at the SCG on Sunday. Hawkins won 17 touches, took seven grabs, five of them inside 50 and four contested, and finished with 5.2 from his 10 score involvements. Like Kennedy, he’s gone through a lean patch recently, but appears to be reaching top form at the right time of the season.

Ruckman – Jarrod Witts (Gold Coast)
Did everything he possibly could to will his team over the line on Sunday evening against a sloppy Essendon outfit. The Gold Coast co-captain had 19 possessions, 13 of them contested, won seven clearances, took four marks and had 60 hitouts, winning 19 of them to advantage. Also had seven score involvements in arguably the best performance of his season.

Ruck Rover – Seb Ross (St Kilda)
Led his side brilliantly on Saturday night against a Melbourne side that were up-and-about early. Finished the game with 31 touches, 15 of them contested, six clearances, seven marks and nine tackles. Showed plenty of attacking flair on the weekend as well, scoring two goals from 12 score involvements and delivering the ball inside 50 on nine occasions.

Rover – Dion Prestia (Richmond)
The former Sun is a huge reason why the Tigers are the form team of the competition right now. Prestia was sublime against Collingwood on Friday night, collecting 35 possessions, 16 of them contested, and winning eight clearances. Gained a very impressive 643 metres, helped by six inside 50s, while he had eight score involvements and two of his four tackles were inside 50. 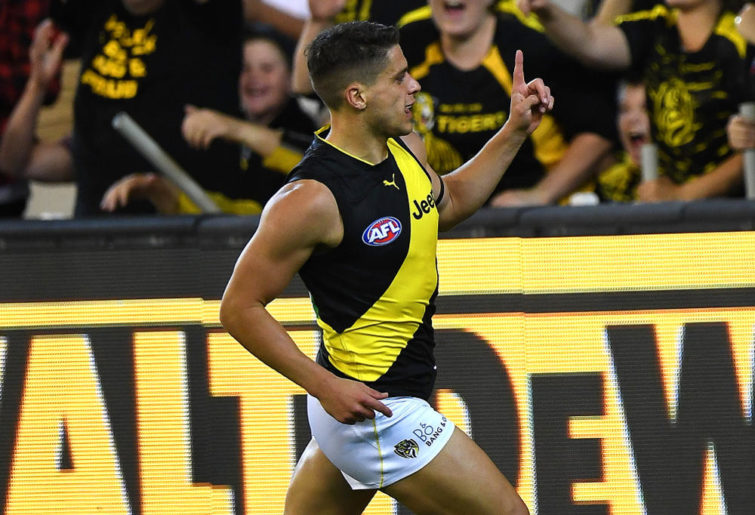 Interchange – Joel Selwood (Geelong)
The Geelong champion was in vintage touch on Sunday against the Swans, collecting 24 disposals, with 13 of them contested. Laid five tackles and took three marks while also kicking a goal in what is probably his best game of the year.

Interchange – Toby Greene (Greater Western Sydney)
The loss of Stephen Coniglio to injury has been a huge hit to the Giants’ premiership hopes, but it has provided a silver lining with the form of Toby Greene since moving into the midfield. The 25-year-old collected 30 possessions, 13 of them contested, gained 563 metres, took eight marks and laid six tackles, two of those inside 50. Is now averaging 30.3 disposals and 119 ranking points from his last three weeks, making him one of the most in-form players across the competition.

Interchange – Marcus Bontempelli (Western Bulldogs)
Continues to do what he does best, rip opposition sides apart with his dynamic play through the middle of the ground. Fremantle felt the brunt of it on Sunday at Marvel Stadium, with Bontempelli gaining 604 metres and having a hand in 11 scores from his 28 possessions at 78 per cent efficiency. Also took seven marks, laid five tackles, had nine inside 50s and booted two goals.

Emergency – Todd Goldstein (North Melbourne)
The big Roo has been in excellent form of late and in it continued at Optus Stadium on Saturday. Going up against Tom Hickey for most of the match, Goldstein collected 17 possessions, 11 of them contested, laid three tackles and won 11 hitouts, 13 of those to advantage.

Emergency – Jake Stringer (Essendon)
Was a large reason why the Bombers left Gold Coast on Sunday night without their tails between their legs, with Stringer impressing in a dynamic midfield/forward role. The former Dog gained a huge 508 metres from just 14 touches, delivering the ball inside 50 five times and getting involved in eight scoring plays while also booting four goals of his own.

Emergency – Lewis Jetta (West Coast)
Gained a monster 713 metres against the Kangaroos on Saturday, which included seven rebound 50s to go with his 21 disposals at 95 per cent efficiency, three marks and three tackles.

“And he’s our Don Bradman, now I ask you is he any good”. And so it was in 1930 when the nation’s hero was immortalised in a song written by Jack O’Hagan and sung by Art Leonard. Hero worship was taken to another sphere when you could own the song you heard on the wireless […]

AFL-starved fans have been offered a glimmer of hope by Essendon chief executive Xavier Campbell, who is confident that the premiership season will restart by July at the latest following the coronavirus shutdown.