AFL reveal fixtures for Round 23

The race for the eight could go down to the final game of the AFL season with Port Adelaide and Fremantle to close out a high-stakes final round.

The AFL has confirmed the schedule for round 23, with games that could decide the finals make-up spread out across all three days.

Port host the Dockers in the final game of the round – a Sunday twilight game at Adelaide Oval which could make or break either team’s season.

The 10th-placed Power and 12th-placed Dockers are among six teams set to fight it out for the last remaining top-eight spots.

Adelaide, currently eighth on the ladder, face the ninth-placed Western Bulldogs in Ballarat in the early Sunday game.

Richmond host Brisbane at the MCG on Sunday afternoon, and that game is primed to shape the top end of the ladder.

The Lions currently sit four points clear of Richmond in third place but their run home also includes tough games against the Bulldogs and Geelong.

Reigning premiers West Coast, GWS and the ladder-leading Cats will look to secure top-four finishes with their matches on Saturday.

The Eagles host Hawthorn in Perth and the Giants face Gold Coast at Metricon Stadium in the two evening games, while Geelong and Carlton’s clash at GMHBA Stadium occupies the twilight slot.

As expected, the round begins with Collingwood hosting Essendon in a blockbuster Friday night clash at the MCG.

The Magpies had been viewed as premiership contenders but recent losses have left them ahead of the seventh-placed Bombers only on percentage. 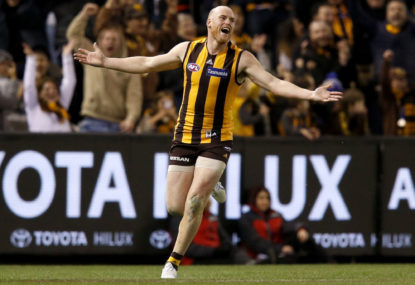