It's time to allow referees to fight back

Not a week goes by in a rugby league season when a referee or other rules official isn’t brought to task by players, coaches, the media, social media or even the ref’s boss himself.

Referee bashing is almost endemic among those on the east coast of Australia from March until early October, when any action a referee takes is scrutinised over and over with the presumption of guilt in nearly every case.

Coaches are incredibly quick to blame referees. Almost any decision they don’t agree with ‘cost us the game’ or, more recently, ‘cost us a chance in the finals’.

We also have the ridiculous situation where Graham Annesley holds his own briefing 24 hours after a round is completed to discuss why certain decisions were made. It’s not to explain why they were made or admit an error was made; it’s to have a discussion about decisions as though the media were experts in the rules. 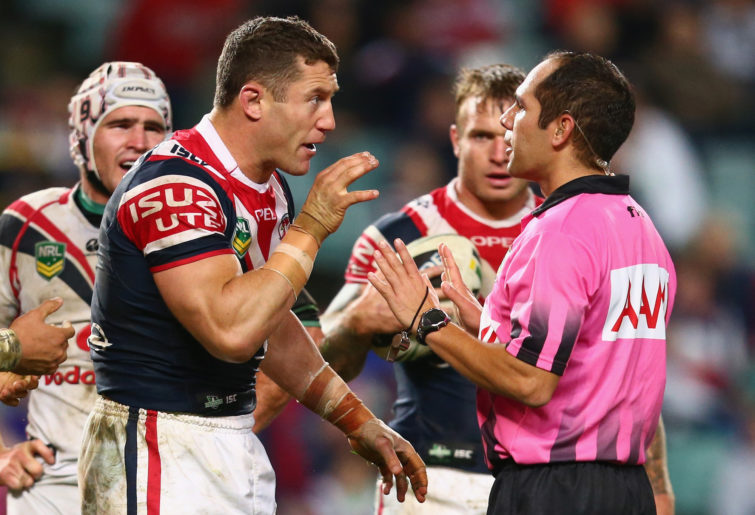 At these same briefings the referee’s boss will announce referees have been dropped and generally disparage them if he considers they have underperformed, all in the public eye.

He’s not alone in giving referees grief. Todd Greenberg has not been shy about giving them a serve from time to time either, which is a tad rich coming from a guy who has helped hand out some very mixed messages about the rules for referees to try and follow – remember, “Let the game flow”?

And what can the refs say or do? Nothing!

But what if that were to change?

Imagine a referee turning up to a media session where a coach is hammering the officials. The referee explains that, no, he didn’t lose the game because of contentious decisions; it had everything to do with the losing coach’s inability to get his players to defend, and when five or six tries are put on by the opposition, one questionable decision isn’t going to make an ounce of difference.

Or what if the ref follows Annesley and points out the hundreds of messages coming from him personally about what rules to enforce, all of which are different and none of which are supportive of referees.

Or what if the referee suggests Todd Greenberg would be best served by trying to clean up the salary rorting, the off-field incidents and all the other issues plaguing the game and leave the refs to do what they’re paid to do, which is mange the actual match according to the rules of the game.

Finally the media and social media ‘experts’ who take great delight in bagging the officials – referees could offer the whistle to these people and make a simple bet: $1000 that they could not referee a half of NRL football without making a stupid mistake, if indeed they could even finish the half because they’re not fit enough to go the distance. Gus Gould should have this offer made to him personally.

In all cases there would be carnage, but why can’t the referees push back? Everyone else can pile in on them, so why can’t they spell out a few home truths?

The really sad thing is that all the other groups mentioned don’t have the courage to work with refs and help make the officiating better. They are too busy criticising or white-anting referees without offering any sort of practical suggestions on how the game could be better controlled.

Everyone who cares about the game knows this has been happening for decades, but it is much worse now that the public can add their many voices through social media. Rarely are these voices supportive, and often they are abusive and threatening.

If the powers that be aren’t going to do something about this referee bashing, at least have the decency to allow the people with the whistle a chance to have their say. Let match officials give players, coaches and fans a serve. Let them have an honest and open two-way public conversation with Annesley and Greenberg without any retribution.

Sadly we all know this will never happen, and on present trend verbal referee bashing is on track to descend into far more dangerous territory. Just ask Matt Cecchin.