The Adelaide Crows will have to do away with their own past in the fight to retain future stars Alex Keath and Hugh Greenwood.

After both were notable omissions from the Adelaide side that lost to Carlton by 27 points at the MCG in Round 19, further doubt has been cast over the out-of-contract pair’s future with the Crows.

Both players arrived at West Lakes as Category B rookies – with Greenwood making the switch to footy from the Perth Wildcats in the National Basketball League and Keath’s cricket career stalling at the Adelaide Strikers – and have since established themselves as important players in the Crows setup.

Keath has been a revelation in defence in 2019, averaging 17 disposals and 6.5 marks per game in the absence of the injured Tom Doedee.

The ex-cricketer is reportedly keen to remain in Adelaide, but contract negotiations continue to drag out with a few Victorian clubs closely monitoring the situation.

Crows fans will be nervous, knowing the club’s poor history when it comes to keeping quality centre half backs.

With delays on a new deal for Keath, the Adelaide faithful will be uncomfortably reminded of the Jake Lever saga – which ending with Lever making the switch to Melbourne after deferring negotiations throughout his breakout 2017 season.

Lever’s defection is the most recent on the list of star half backs to desert the Crows. Greater Western Sydney co-captain Phil Davis departed for the Giants in 2012, after All Australian Nathan Bock jumped ship to join the inaugural Gold Coast Suns in 2011.

Greenwood – who has played 47 games since making his Adelaide debut in 2017 – will also become a free agent when his current contract expires at the end of 2019. 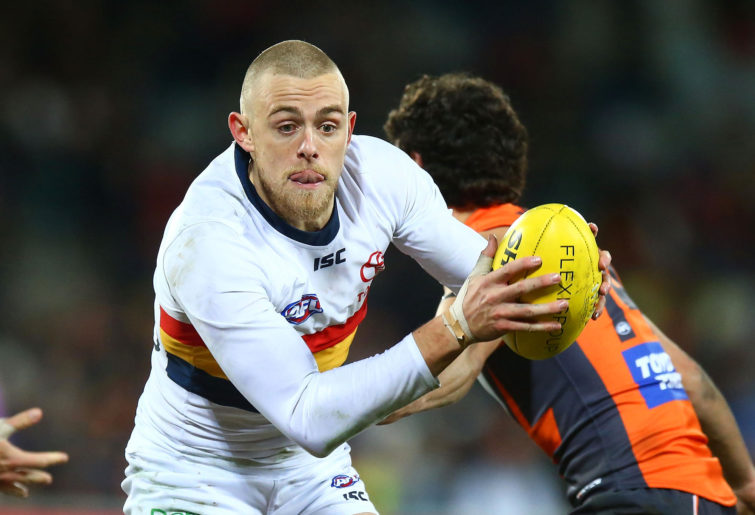 The 27-year-old’s security in the Crows midfield was reportedly a major factor in ongoing talks for a new deal with the club, but has now been omitted for the second time this season against Carlton after he was dropped – and subsequently recalled as a late inclusion – for the Round 12 victory over the Giants.

The Hawks would present as an appealing destination for the out-of-favour mid-forward, with a good track record of recruiting ex-Crows.

Ricky Henderson – who was shown the door by Adelaide in 2016 – is averaging a career-high 25 disposals in 2019, trailing only James Worpel for total possessions at Waverley.

Meanwhile, Jack Gunston is now a three-time premiership player and All Australian since donning the brown and gold in 2012.

Geelong’s Patrick Dangerfield won a Brownlow Medal in his first season with the Cats in 2016, while Charlie Cameron and Jarryd Lyons look set to challenge for this year’s premiership with Brisbane less than two years and three years respectively since departing West Lakes.

Keath and Greenwood join a host of Crows to come out of contract at seasons end. Senior players Andy Otten, Cam Ellis-Yolmen, David Mackay, Jake Kelly, Richard Douglas, Riley Knight and Sam Jacobs are all yet to re-sign past 2019.

All eyes will be fixed firmly on Adelaide both on and off the field in the back end of the season.