Imagine if history left Steven Gerrard behind because he never lifted a Premier League trophy or Patrick Ewing because he could never quite drag that horrendous Knicks roster to a ring.

It sounds insane. Both are legends of their craft, famous for the respect they commanded from their home crowds. The AFL is quantifiably different, however; with a much smaller market, players can very easily become cult heroes and icons for their on-field exploits. See Nic Natinui, for example, who isn’t a top-three ruckman but has more presence than the pope in Western Australia.

But a very interesting discussion with a friend recently got me thinking of underrated and forgotten players, and at the top of the list is Scott West.

Right off the bat, let’s establish that West never won an AFL premiership. And to be honest, despite a couple of good runs into September, the Doggies were never really legitimate contenders. In fact despite playing in 12 finals, West was on the winning side just three times. Those games were:

There are a couple of things that jump out at you straight away. Firstly, the Bulldogs did not win a final in eight years. That’s a sad illustration of just how bad they were in the early 2000s. Secondly, West torched Collingwood in his last finals win if anything above 25 disposals is considered good for a midfielder and anything above 35 is a brilliant effort, especially in a final.

But how did West perform in losing finals? Was he a choker when his team needed him? Here are the disposal counts from his nine losing finals:

His overall finals disposal average is 26.92, but if you take out 1994, his second season in the league, it rises to 28.6. If we are classing 25 disposals per game as star player numbers, to average nearly 29 disposals per game in finals is a testament to his ball magnet ways.

The Bulldogs didn’t make the finals between 2001 and 2005, five seasons of West’s prime form spent on a team that couldn’t finish in the top half of the league.

While evidently West did not have tremendous team success, which admittedly is a big markdown when judging someone’s legacy, his individual success is much better and much more attractive. 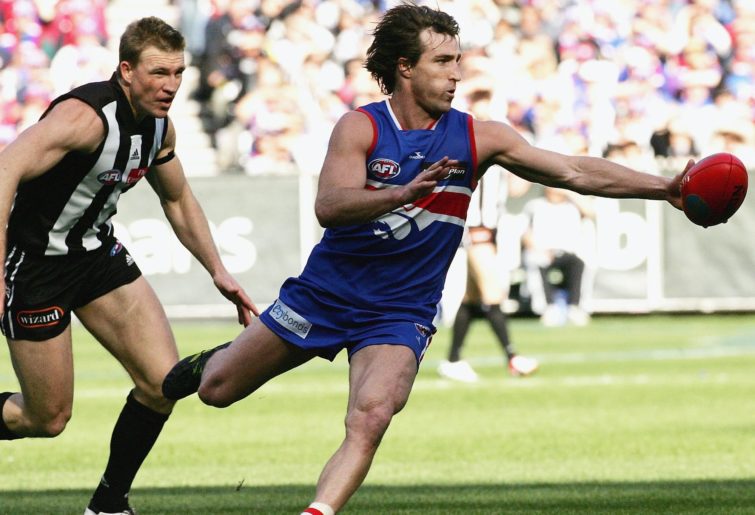 That is a mind-boggling run of consistency to maintain. He won his first medal in just his third season and his last in his 13th, and considering he finished second in the Brownlow Medal in 2006, he probably should’ve won an eighth Sutton Medal in his 14th season of AFL football. That is truly a testament to his ability as a player.

Speaking of the Brownlow Medal, he is one of the greatest players to not win the award. Incredibly, he finished runner-up twice, in 2000 and 2006; finished third in 1999; and came fourth in 2004 and 2005. That is just shattering. He arguably deserved it in 2000 – Shane Woewodin polled two votes in the last game, which surprised many – and he was regarded by many, including the legendary Lou Richards, to be the best player in the league in 2006.

Keep in mind that Matt Priddis, who is essentially a devolved Scott West, has a Brownlow Medal. For all the other years you can justify the actual winners, but nobody over that period had the consistency of West. He has the 13th most ever career votes and still couldn’t take home a medal.

In 2002, having won four Charlie Sutton medals already in his nine-season career, West was named in the Western Bulldogs team of the century, staking his claim among such greats as Doug Hawkins, Ted Whitten and Chris Grant. He essentially booted Tony Liberatore, one of the club’s most beloved players and the 1990 Brownlow medallist, to the interchange bench. Whichever way you want to look at it, if the team of the century selectors believed West was more deserving than Libba of a spot in the starting line-up, that should say something. And yet Liberatore is infinitely more remembered than West.

Another distinct honour West received – and the last one for this piece because we need to move on – was his 2013 induction into the AFL hall of fame. There’s not really much I can say here besides it being a completely justified move and that he deserves to be in among the greats.

Let’s compare him to one of the icons of the 1990s and 2000s, Nathan Buckley. Make no mistake about it, Buckley is one of the champions of the game, but I would argue that West’s career is just as good, if not better, than Nathan Buckley’s.

Those numbers come across a variety of categories, with the score finishing at 3-3-1. And yet I can promise you if you ask someone who is better out of the two, they’ll either instinctively say Buckley or ask you who Scott West is.

Somehow the best player at the Whitten Oval in the last two decades has become an afterthought.