Steve Smith has reminded world cricket of his leadership credentials with what he called one of his best hundreds on the opening day of the 2019 Ashes series.

As many Australians turned off their televisions and went to sleep with their national side collapsing on Thursday night, the embattled leader was just preparing to dig in for one of the gutsiest knocks in recent Ashes memory.

With the top order vanishing around him, Smith’s 219-ball stay at the crease accounted for 77 more deliveries than the rest of his top seven peers combined.

But despite his stubborn brilliance with the bat, it was when Peter Siddle arrived at the wicket with Australia in dire straits at 8-122 that the ex-captain’s leadership shone through.

With a few words and an unwavering belief in his teammate, Smith’s advice to the 34-year-old empowered the tail-ender to score what may prove to be a Test-defining innings.

“I was just telling him to watch the ball and just keep watching it really hard and play his natural game,” Smith told reporters after the day’s play.

“When it was overpitched … he drove a few balls really nicely. When they bowled short he was getting underneath it majority of the time.

“He had a really good, strong defence, which is what you need on a wicket that is doing a bit. His defence was magnificent, he was willing to get beaten every now and again and just play the line of the ball.

“He did that beautifully and I think it’s great to see Sids back.”

Shortly after Siddle’s arrival, Smith passed 50 with a push to backwards point, and when the No. 10 finally departed having compiled a brave 44 from 85 balls faced, Australia’s miracle man got creative.

After an over-headed flat-bat cut shot to Stuart Broad at cover Smith sent Moeen Ali to the boundary twice in quick succession. The first, a four, bludgeoning a full-toss from the off spinner back past his head in the 70th over before a gloriously timed slog sweep sent the ball into the stands for six from the first delivery of Ali’s next over.

A single from the fourth ball of the 72nd over left No. 11 Nathan Lyon with the unenviable task of surviving the final two balls with the English crowd in full voice. 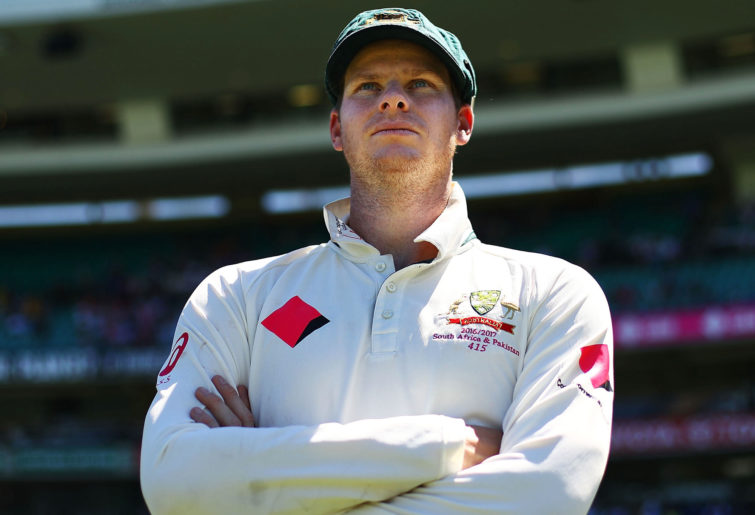 But he did, and as Lyon fended away the final delivery, a roar could be heard around Edgbaston as loud as any on the day, this time from the travelling Australian fans.

This noise would be outdone just four balls later, when Smith guided a trademark drive through the covers off Ben Stokes’s bowling, to bring up a fearless hundred in his first Test match since being banned for his part in the Cape Town sandpaper scandal in March 2018.

At this moment, in combination with his lower-order accomplices, Australia’s persecuted star had breathed new life into the nation’s first Test hopes.

The ex-captain’s galvanising effect on the team was clear for all to see in the dressing room’s reaction to the watershed milestone – the entire group rising as one in unbridled elation on the Edgbaston balcony as the ball sailed to the ropes.

The 30-year-old, who had wept 16 months ago in a press conference taking full ownership for his failure of leadership, now stood in the middle of the Edgbaston Cricket Ground with a smile for all to see, redeemed on the biggest stage in cricket.

Smith, the leader, was back where he belonged.

Whether officially the captain of the Test side or just a leader by nature, in this moment it was undeniable the love that Test cricket’s highest averaging current-day player has for the game.

But the scorer of the first century of the 2019 Ashes admitted that that passion had at times been clouded through injury and suspension.

“There were times throughout the last 15 months where I didn’t know if I was ever going to play cricket again,” Smith admitted.

“I lost a bit of love for it at one point, particularly when I had my elbow operation. And it was really bizarre, it was the day that I got the brace off my elbow that I found a love for it again.

“I don’t know what it was, it was like a trigger that just said ‘right I’m ready to go again, I want to play’ and I want to go out and play for Australia and, I guess, make people proud and just do what I love doing.

“I’ve never sort of had those feelings before where I didn’t have a great love for the game and it was there for a little while.

“Fortunately that love’s come back and I’m really grateful to be in this position now playing for Australia again and doing what I love.”

With some questioning Tim Paine’s captaincy credentials in the lead-up to the series, Smith, predictably, refused to give legs to conjecture.

When asked if his efforts on Day 1 resembled a ‘captains knock’, Smith stood firmly with his official captain.

“I obviously don’t have the armband, and that’s okay,” he said.

“I think Tim’s done a magnificent job over the last 18 months.

But having absorbed the worst the Edgbaston fans could throw at him, the first-day hero says the jeers don’t do anything for him.

“It doesn’t bother me. It doesn’t motivate me. It just is.”

Off spin? Easy to bowl and easy to bat against. Not that effective in some conditions. Take Dom Bess, for example. In 86 overs in the current Test match between England and Pakistan, he has yet to be called to the bowling crease – not even a token over before an interval. Yet, the best […]