Born and raised in Australia before departing for high school basketball in the States, Simmons occupies a no man’s land located somewhere over the Pacific.

Simmons’ clumsy withdrawal from upcoming Boomers duties was symptomatic of the awkwardness that has come to cloak the Philadelphia 76ers man.

The news that Simmons would not be joining the Boomers at the FIBA World Cup – a back-flip on a social media video announcing his participation – was broken by a Tweet from ESPN reporter Adrian Wojnarowski.

Although Simmons followed up a few days later with a statement citing his NBA commitments and plans to still participate in the Boomers’ exhibition games on home soil, it felt hollow.

Hollowness then turned to annoyance when he later pulled out of the exhibition games altogether.

The whole messy episode spoke to a lack of rapport between player and country.

Sure, the average Aussie sports fan could perhaps tell you that he is the son of former NBL import Dave Simmons, and that Simmons Junior is a former No.1 NBA draft pick and plies his trade with the 76ers in the NBA.

But having played basketball in the US since early 2013 and never having meaningfully represented the senior Boomers team nor featured prominently in the Australian mainstream media, there is a lack of attachment to Simmons for local fans.

This missing bond would have softened the blow of Simmons’ recent U-turn, particularly given the decision to pull out was a sensible one.

Until he establishes himself as a bona fide NBA superstar, the 2020 Tokyo Olympics is the only national team distraction Simmons can entertain.

And Simmons’ PR issues have not been confined to local shores, as his adopted American home has struggled to get a handle on the Melbourne product.

College basketball was Simmons’ rocky introduction to the US hoops scene.

His decision to sign with Louisiana State University – a football, not basketball, powerhouse – was considered dubious, seemingly motivated by his godfather David Patrick being an assistant coach on the team.

His inability to guide LSU to the NCAA tournament plus academic eligibility issues heightened that scepticism.

In the lead-up to the 2016 NBA draft – in which he was ultimately selected first overall – Simmons’ attitude was called into question by sections of the NBA community.

NBA analyst Stu Jackson said: “I saw a player that didn’t necessarily persevere as well as I would have liked through not having a very good season.”

Away from the court, retired NBA star Tracy McGrady made a thinly veiled reference on ESPN’s The Jump to Simmons – without actually naming him – not paying due respect to NBA greats he was sharing a suite with at the NBA finals.

While there is an undoubted aloofness about Simmons, you wonder whether being a foreigner contributed to the criticism. 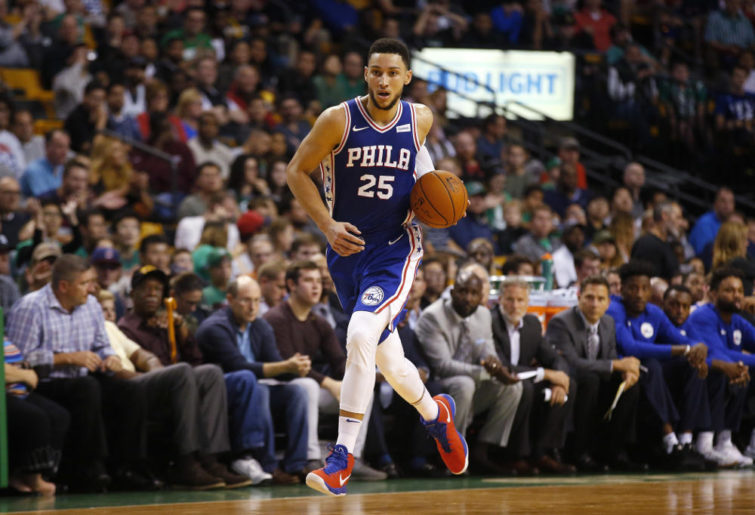 And then there’s the jump shot, or the lack thereof.

Statistics abound, but it’s safe to say Simmons rarely shoots the basketball, instead using his size and freakish athletic ability to finish at the rim. This deficiency has become a point of obsession in the NBA, with some even suggesting Simmons shoots with the wrong hand.

Then there is his position within the 76ers set-up.

While his team-mate Joel Embiid enjoys favourite son status in Philadelphia, Simmons shares a sometimes testy relationship with the 76ers’ passionate fan base as they impatiently wait for the Australian to fulfil his enormous potential.

Rumours have also long swirled as to the health of the relationship between Simmons and Embiid, as the two young guns have been forced to share the limelight in Philadelphia.

Rounding out the Simmons riddle is his former dalliance with Kendall Jenner. This high-profile development belied his reserved persona.

But if Simmons is trapped by his own detachment, success for club and country is the key to setting him free. Nothing breeds popularity like winning, and Simmons is well placed to achieve it.

If Simmons can play messiah and lead an NBA-loaded Boomers squad to the promised land of a first Olympic medal in Tokyo next year, Australian sports icon status will be assured. Suddenly, Simmons will become “our Ben” and will be loudly celebrated for leading the resurgence of men’s basketball in this country.

His opportunity at the 76ers is no less compelling.

In a league made even by Kawhi Leonard’s decision to spurn LeBron James and the Los Angeles Lakers, the Al Horford-infused 76ers loom as legitimate championship contenders.

Deliver an NBA title to sports-mad Philadelphia – the city’s first since 1983 – and any question marks in the States over Simmons will be buried deep beneath the victory confetti.