AFL Team of the Week: Round 20

Some great performances across the board made picking a Team of the Week for Round 20 an almost impossible task.

Back Pocket – Nick Haynes (Greater Western Sydney)
Was impenetrable at times for the Swans on Saturday, with the courageous defender hauling in 12 marks, eight of them intercepts and four of them contested. Had 18 disposals, laid four tackles and also had four spoils.

Full Back – Joel Hamling (Fremantle)
Things were looking shaky down back for the Dockers at quarter time on Saturday, with big Cat Tom Hawkins piling on three first term goals. Enter Joel Hamling. The premiership defender shut Hawkins out of the match from that point on, keeping him goalless after the first break while hauling in five grabs of his own.

Back Pocket – Jeremy Howe (Collingwood)
Shook off a leg injury following an awkward landing in the first quarter to star for the wounded Magpies on Sunday against Gold Coast. Collected 21 possessions, five of them were rebounds from defensive 50, took 11 marks, four of them intercepts, and had seven spoils.

Half Back – Shane Edwards (Richmond)
The smooth-moving Tiger was terrific on Saturday night against Melbourne, racking up 31 touches, 11 of them contested, and winning eight clearances. Gained 467 metres for the night, a figure helped by his five rebounds from defensive 50, while he had nine score involvements.

Centre Half Back – Jeremy McGovern (West Coast)
A poor first quarter from the Blues on Sunday was McGovern’s gain, with the three-time All Australian picking off several opposition forward thrusts. Finished the game with 18 touches at 94 per ent efficiency, seven of them rebounds from 50, and 13 grabs, six of them intercepts and four were contested.

Half Back – Nic Newman (Carlton)
Unbelievable performance from the ex-Swan, who played the best game of his career. Newman gained 494 metres from his 24 possessions, rebounding from defensive 50 six times while he took 11 grabs, laid three tackles and got forward to kick four goals. Superb game.

Wing – Marcus Bontempelli (Western Bulldogs)
The Bulldogs superstar did his best to drag his side back into the contest against the red-hot Brisbane Lions on Sunday evening at the Gabba. Finished with a monster 716 metres gained from his 35 disposals, while he took five marks, laid seven tackles and kicked a goal from his 12 score involvements.

Centre – Toby Greene (Greater Western Sydney)
Continued his unbelievable rich vein of form in the Sydney Derby, racking up 34 possessions, 18 of them contested and winning 10 clearances. Had a huge 673 metres gained, helped by seven inside 50s, while he took eight grabs, laid six tackles and kicked a goal.

Wing – Dan Houston (Port Adelaide)
Was brilliant in an upset victory for the Power, dominating against the Bombers with 474 metres gained from 29 touches, 11 of them contested, six clearances and 10 marks. Also kicked two goals, which were part of his nine score involvements. Has been Port Adelaide’s most improved player this year and will go a long way to winning the club best and fairest.

Half Forward – Nat Fyfe (Fremantle)
Huge game from the inspirational Fremantle captain, who showed a presence both in the middle and up forward with his 27 possessions, a massive 23 of them contested, 11 clearances, four marks and four tackles. Three of his grabs were inside 50, with two of them contested, while he kicked two goals from eight score involvements in a very good win against the ladder-leading Cats.

Centre Half Forward – Ben Brown (North Melbourne)
Continued his good run of form with a match-winning performance against Hawthorn on Friday night. Brown worked tirelessly to take six marks, five of them contested and three of them inside 50, while he also laid an equal career-high four tackles. From his 10 score involvements, he booted an inaccurate 4.3, meaning he now has 18 goals from his last five games. Has the Coleman Medal in his sights.

Half Forward – Mitch Robinson (Brisbane)
Has become a genuine gun of the competition and his performance on Sunday against the Western Bulldogs showed why. Robinson gathered 24 possessions, gaining 653 metres with them, while he took eight grabs, laid six tackles and booted two goals from his 10 score involvements.

Forward Pocket – Robbie Gray (Port Adelaide)
The Power superstar was sensational in an important win for his club on Saturday, finishing with a four-goal haul from 19 disposals and 10 score involvements. The three-time best and fairest winner has kicked seven majors from his last two games, and his fortunes up forward over the next three weeks will determine whether the Power play finals.

Full Forward – Taylor Walker (Adelaide)
Spent more time close to goal with Josh Jenkins being sent back to the SANFL and it produced fast results, with the Crows captain booting four goals against St Kilda. Now has 36 majors for the year which places him ninth in the Coleman Medal, which really isn’t all too bad for someone who has been battered from pillar to post by the media.

Forward Pocket – Isaac Heeney (Sydney)
Almost dragged Sydney over the line for what would’ve been a famous victory over crosstown rivals GWS on Saturday. The young Swans star collected 18 disposals, 12 of them contested, took seven marks, three of which were contested grabs, and kicked 4.2 in a devastating two-point loss. 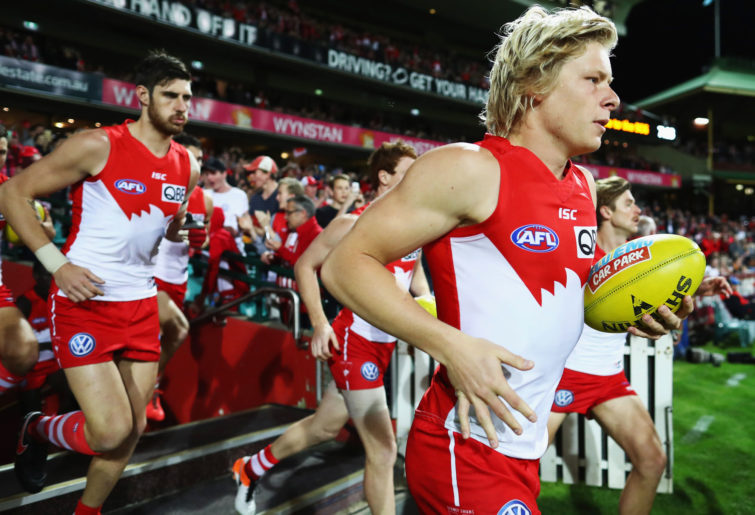 Ruckman – Brodie Grundy (Collingwood)
A sensational performance from the Magpie superstar, who went toe-to-toe with in-form Gold Coast co-skipper and ex-teammate Jarrod Witts. For the 13th time this year, Grundy had over 20 touches, racking up 26 disposals, 12 of them contested, winning eight clearances, taking six grabs and laying five tackles. Was superb in the ruck battle, winning 43 hitouts, 10 of them to advantage, while he kicked a goal from his 11 score involvements.

Ruck Rover – James Worpel (Hawthorn)
Had a blistering start to Friday night’s contest against North Melbourne, and while his Hawks couldn’t go on with it, Worpel can certainly hold his head high. The youngster had 37 disposals, 15 of them contested, won 11 clearances, gained 590 metres, had nine score involvements, took five grabs and laid five tackles. He is a genuine young star of the competition.

Rover – Adam Treloar (Collingwood)
Was on fire early at the MCG on Sunday as the Magpies gained the ascendancy on the Gold Coast Suns. Finished the game with 553 metres gained, nine inside 50s and 13 score involvements from his 37 possessions, 15 of which were contested, while he won 10 clearances, took eight grabs and kicked a goal. Most impressively, Treloar, who has often been criticised for his use of the ball, went at a deadly 91 per cent efficiency.

Interchange – Jackson Macrae (Western Bulldogs)
Put up insane numbers on Sunday against the Lions at the Gabba, amassing a monster 45 disposals, which he used to gain 574 metres, while he also had eight inside 50s. 21 of Macrae’s touches were contested, while he won 12 clearances to go with his seven tackles. Amazingly, he was still two touches off his career-best of 47 which he posted last year, also against Brisbane.

Interchange – Michael Walters (Fremantle)
Was pivotal in Fremantle pulling off a huge against-the-odds victory over Geelong at Optus Stadium. Walters picked up 29 possessions, 17 of them contested, while he won eight clearances, took five marks, laid five tackles and booted a goal.

Interchange – Jacob Hopper (Greater Western Sydney)
The GWS youngster is going from strength to strength and it continued with a huge game in the Sydney Derby on Saturday. Hopper amassed 26 disposals, took seven marks, laid four tackles and kicked a career-high three goals from his nine score involvements.

Interchange – Shaun Higgins (North Melbourne)
After touching the ball just twice in a disappointing first term, Higgins turned the game on its head from that point on. The two-time Syd Barker Medallist had 504 metres gained and 10 score involvements from 28 touches, 15 of them contested at a very classy 92 per cent efficiency, while he won seven clearances and kicked two goals in his best performance of the year. 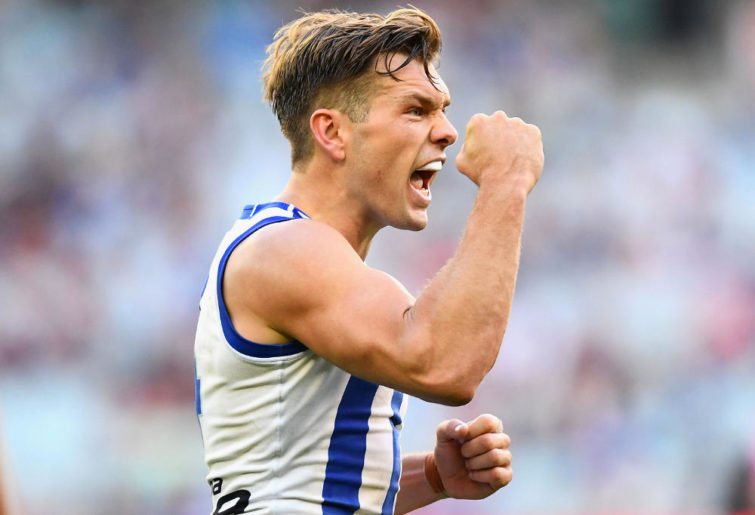 Emergency – Charlie Ballard (Gold Coast)
The slight-bodied youngster from the Suns was a shining light at the MCG against Collingwood, collecting 22 possessions, 21 of them by foot at 86 per cent efficiency, while he hauled in a monster 15 marks, three of them contested and six intercepts. He provided plenty of drive with eight rebounds from defensive 50, while he had a total of seven spoils. Has a huge future.

Emergency – Liam Ryan (West Coast)
We’ve become accustomed to his high-flying feats, but his courageous mark running back with the flight of the ball on Sunday against Carlton might be his best mark yet. It was the highlight of a big day out for Ryan, who kicked a career-high four majors from 16 touches.

Emergency – Paul Ahern (North Melbourne)
Has reinvigorated the North Melbourne defence since coming back into the side as a rebounding half-back flanker. Ahern was terrific on Friday night against the Hawks, gaining 602 metres from his 26 disposals, which included eight rebounds from defensive 50 and five inside 50s.

Emergency – Dustin Martin (Richmond)
The Tiger star continued his excellent form with another great game against the Demons on Saturday night. The Brownlow Medallist had 504 metres gained, 11 inside 50s and 10 score involvements from his 34 possessions, 17 of which were contested. He also kicked a goal in yet another win for Richmond.