Caretaker Carlton coach David Teague isn’t sure whether he wants to be prime minister or the AFL club’s next boss but his skipper has no doubt.

Patrick Cripps has sharply increased the chances of Teague winning the full-time role by throwing his weight behind the Blues’ interim leader.

“I’m on the Teague train,” Cripps told Channel Seven on Sunday prior to the Blues’ loss to West Coast.

Teague has rejuvenated the Blues in his short time at the helm.

The 38-year-old inherited a talented but demoralised side in June following Brendon Bolton’s sacking, with just one win in 11 matches.

Under Teague, Carlton has rebounded with five victories in their following eight games.

The undermanned Blues went down to premiership fancies West Coast at Marvel Stadium on Sunday before Teague considered Cripps’ endorsement.

“That sounds quite nice. I’m not sure how ScoMo is going in the House but we’ll will see what happens.”

Teague insisted he was happy in the job but would wait until the end of the season before considering any offer that might come his way.

The race to lead Carlton could be a two-man contest between Teague and former Brisbane Lions champion Michael Voss.

If the decision was up to Cripps, the club’s brightest star, Teague would be given a contract tomorrow.

“The way the boys have been playing the last few weeks, the growth is definitely building,” he said.

“Teaguey has brought the best out of certain players in different roles. The boys are buying into those roles.
“It has been some dark times but the boys are starting to really believe and we’ve got some confidence about us.”

“One thing about Teaguey I loved he always speaks his mind but he’s usually fun,” he said.

“All the forwards loved him and that’s a big reason why Mitch McGovern came across from Adelaide because of Teaguey.

“He’s got that balance where he has a laugh in front of the group so everyone relaxes around him but when he flicks the switch and is serious, everyone stares straight through him and tunes in.

“I’ve really loved having him as a senior coach … he’s been awesome.”

Carlton is one of three clubs to have parted ways with coaches this season.

North Melbourne has already appointed homegrown assistant Rhyce Shaw to the top job after Brad Scott’s departure.
St Kilda could also do the same with Brett Ratten in the mix to succeed Alan Richardson.

Carlton co-captain Patrick Cripps has signed a monster new six-year contract in a huge boost for the under-fire AFL club. The Blues (4-9) are out of finals contention and have commissioned an external review of their underperforming football department as they seek answers to this year’s shortcomings. But Cripps’ signature comes as a strong vote […]

Off the table: McKay pens two-year extension with Blues 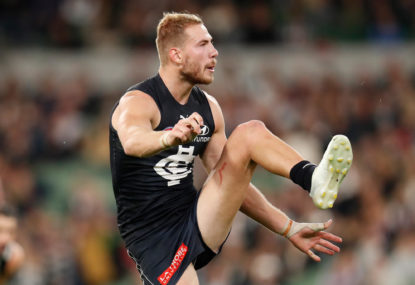 Off the table: McKay pens two-year extension with Blues

Sometimes as a football club, games come along that you just have to win. Have to win. Carlton had one of those against West Coast on Sunday at the SCG. And they lost. And they lost without really giving a whimper.

Tayla Harris has officially joined her third AFLW club after Melbourne sealed a trade for the high-profile forward.

Staring at an eighth straight season without an AFL finals appearance, embattled Carlton are set to launch a wide-ranging independent review of their footy department.