The blueprint to beat Sydney FC

Sydney FC have put together an unbelievable squad for the upcoming A-League campaign, but has it got any weaknesses? How can Sydney FC’s squad be beaten this season?

First of all, how can a team press Sydney?

The best thing to do is to force the long ball to Adam Le Fondre or Kosta Barbarouses. As seen in around the first five or eight games of Sydney FC’s 2018-19 season, their main strategy was getting the ball to Jop van der Linden to get the ball in behind to Le Fondre. It was almost like Sydney were excited about the prospect of having a pacey striker, after having the likes of Bobo and Marc Janko, and were getting the most out of him.

The best way to do this is to have one player on every player in the Sydney team, except for Alex Wilkinson. This is because as solid as Wilkinson is defensively, he just isn’t comfortable going forward with the ball. That would force him to make the long ball or pass it back to Andrew Redmayne. 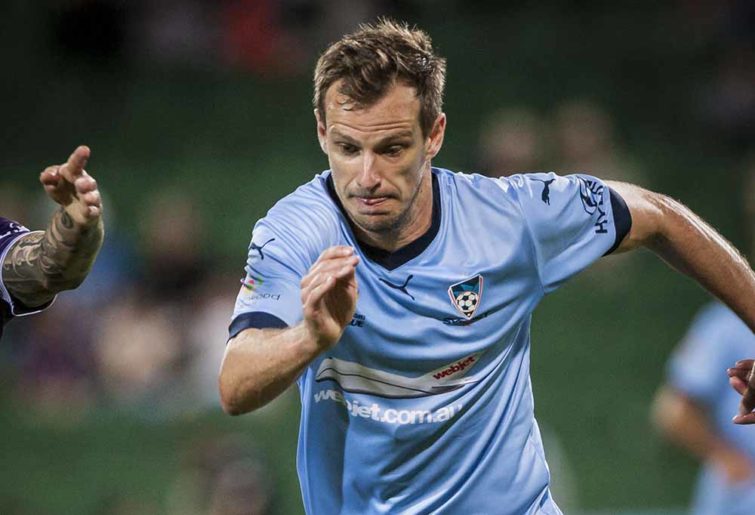 If the ball does go back to Redmayne, then back off and allow him to take time to make a pass. When Redmayne is allowed unexpected time, he always seemed surprised, and if you’re marking everyone properly he will be forced to make the long ball.

I have seen multiple occasions where Redmayne has simply messed up due to being allowed too much time. Assuming that he does make the long ball, your defence will get it nine times out of ten. The defender passes the ball back to the keeper, who takes a touch and then has the ball in his hands.

Now you have to distribute the ball into the attacking half. Due to the pace of Le Fondre and Barbarouses, as well as their ability to pick-pocket the ball, it is best not to linger on the ball too long, so the way to get the ball forward is to utilise Michael Zullo’s lack of height and Alex Wilkinson’s lack of pace.

So, assuming you are playing a 4-3-3, start with a quick right winger and a tall striker. You would swap them around, play a ball onto the head of the striker, who is on the wing against Zullo. The striker can flick the ball onto the quick winger, who is now on his preferred wing against Wilkinson.

He can either get around him or hold up the ball, waiting for the options. It is now five against four, with Sydney’s defence plus Brandon O’Neill (Luke Brattan won’t be back yet due to his slow transitioning in defence). If the winger can get around Wilkinson, it is now a four on four, which is a great opportunity to score.

Your team scores and Sydney are on halfway for kick-off, but how can that be defended?

By far the best way to defend Sydney FC is to force them onto the wing, preferably the left. You can set up with a narrow back four, and constantly track the playmakers Milos Ninkovic and Alex Baumjohann.

If Ninkovic or Baumjohann do get the ball, force the strikers to make the runs onto the wing. With Le Fondre, you can’t force him to cut inside and force him to hold up the ball. Same with Barbarouses, except you can’t give him any room down the line, because he will outpace almost any left back in a foot race.

If they aren’t counter-attacking and are playing a possession game, force the ball onto the wings, and force Zullo and Rhyan Grant to get in crosses first time.

Overall, Sydney FC has put together a great squad, but like every team, they have their flaws.

And if a team plays the right style and tactics against them, then they give themselves a chance to grab at least one point.

Brisbane Roar will be the first team to line up against Sydney in the FFA Cup round of 32, and that will be a very interesting game.

Sydney FC coach Steve Corica has labelled his side’s 4-1 drubbing of Adelaide United as the Sky Blues’ best performance of the season.