How the Wallabies are cleaning house under Shaun Berne

Like most youngsters growing up, I was given chores to do by my parents.

Chief among them was the hoovering of the house, and I quickly found that my Mum was an exacting taskmaster. She didn’t sit back and just admire the carpets, she would peek behind the sofas and move tables, finding hidden lines of dust.

I learnt that it was that last five per cent of the effort that really counted, getting into all of the nooks and crannies to ensure that the job was thorough and complete. I even discovered a tiny grey mouse who lived in the old fireplace, which had been blocked up and unused for years. I didn’t tell Mum about that. He lived out his years in peace and quiet, undisturbed by his human companions.

It is that last five per cent that professional rugby coaches look for at the cleanout in the modern game. In an era when attacking teams routinely win 95 per cent of their own rucks, it is the small details that count – how many support players need to be committed to win the ball in contact, and how quickly it reaches the hands of the halfback.

Every attacking scheme has to hit the point of balance between support at the breakdown and numbers outside it.

The appointment of Michael Cheika’s new attack coach, 40-year-old Shaun Berne of the Melbourne Rebels, has flown under the radar in the backwash of the loss of Australia’s foremost offensive player, Israel Folau.

Berne has immediately made his mark by installing an attacking design similar to that employed by the Rebels. Attackers (both distributors and ball-carriers) tend to play as close to the advantage line as possible so that every line breach made is a meaningful one.

Australia’s second try versus the Springboks was an instructive example of how quickly the flat attacking alignment can unravel a defence:

Bernard Foley releases the pass just as the defender opposite, Frans Steyn, rushes past his ear, and Matt Toomua’s roll on the deck takes him through the jackal attempt by Peiter-Steph Du Toit.

Now look where Kurtley Beale is receiving the first pass on the next phase of play from Will Genia: 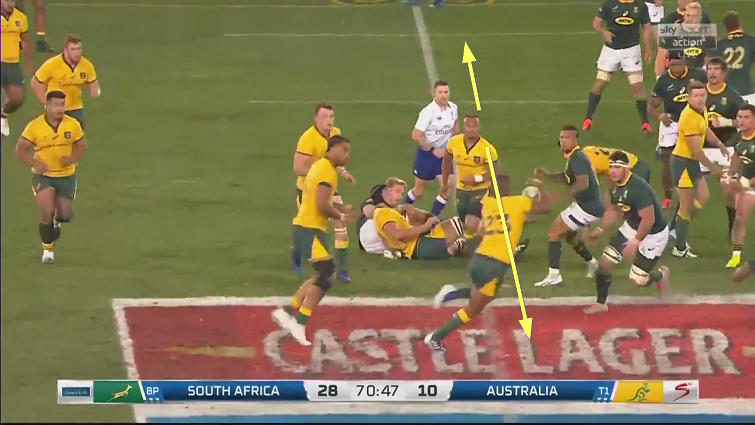 He is standing short to 9, right on the advantage line – both Beale and Genia are on halfway when the former takes the ball. In the system run by his Wallaby predecessor Stephen Larkham, there would be more depth and width, and Beale’s attitude would be angled more towards the corner-flag than straight upfield.

Berne’s pattern demands more plays run off 9, rather than 10 or 12:

Two-thirds of the plays are run off the halfback because there is no time and space for the ball to reach second or third receiver before the defence shuts the door.

Quick ball in contact situations is essential to make everything tick over, and from that standpoint Toomua’s contribution to the try is key. He is able to pass off the ground from a position in behind the defensive line to give Genia instant ball for the next phase.

With so many collisions occurring right in the teeth of the defence, the oil in the offensive machinery is, ultimately, accuracy in contact. The following table depicts the key contributors at cleanout for the Wallabies against South Africa and Argentina.

Key cleanouts represent occasions where support players were able to remove threats singly and without help. Failed cleanouts tended to reverse momentum and typically led to a turnover.

Cleanout contributions are also intrinsically related to the number of times players are required to carry the ball. For example, the top two cleanout forwards in the tight five, Kepu and Arnold, were only asked to carry the ball nine times between them over the two matches.

On the other hand, number 8 Isi Naisarani and inside centre Samu Kerevi combined for 207 metres on 52 carries, representing a massive 25 per cent of Australia’s total carrying output. Their cleanout numbers were slightly lower as a result (10.8 and 7.0 per game respectively).

Australian captain Michael Hooper performed industriously in both areas, with 14 runs for 68 metres to add to his average of 16 cleanouts per game.

The cleanout stats reveal some fascinating developments in the Berne offence:

Some of the failures have been high profile. For example, the turnover leading to South Africa’s first try in Johannesburg was the result of Kepu’s only failed cleanout after the ‘live’ support player, Lukhan Salakaia-Loto, either fell or was knocked over.

The poacher on that occasion was Springboks number 8 Francois Louw, who remains one of the most formidable on-ball exponents in world rugby. Louw was twice removed by Rory Arnold one-on-one in the first half, despite having the time and space to get established over the ball:

It is a picture-perfect cleanout for a big man on a more compact opponent. Arnold makes an impact which jack-knifes Louw sideways and downwards. There are allowable technical illegalities on both sides – Arnold makes temporary contact with the neck, Louw has a knee on the ground before he competes.

Why is it important to have players who can perform these one-on-one removals? Because the attack wants to commit a minimal number of players to the ruck and keep them available in the attacking line instead. That is lean efficiency for the offence.

Let’s take another example from the match in South Africa:

James Slipper makes a good initial cut off the pass from halfback Nic White, then Michael Hooper picks up at the base of the ruck to create even more momentum.

A big gap opens on the left side of the Springbok breakdown, and only one Australian player is needed to stand above the tackle ball. That is Salakaia-Loto, the first man up. Izack Rodda is wasted by simply adding himself to the ruck: 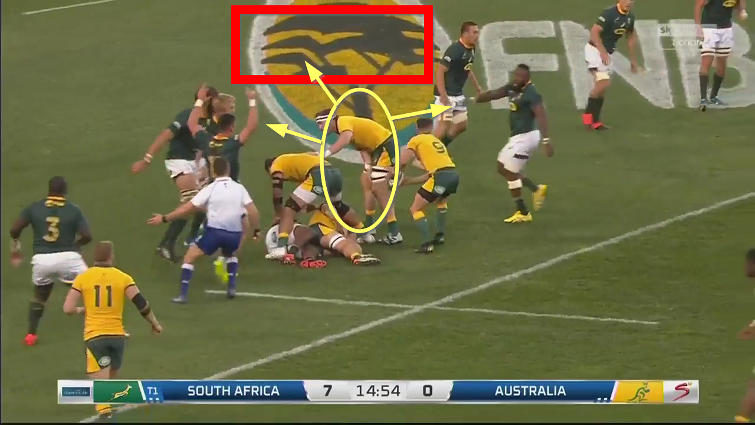 Whether Rodda continues with another pick play, takes a short ball from White, or moves out towards first receiver, this was an opportunity for him to recognise that he could have joined the attack, not support the cleanout.

This over-resourcing of the ruck occurred in a variety of different situations: 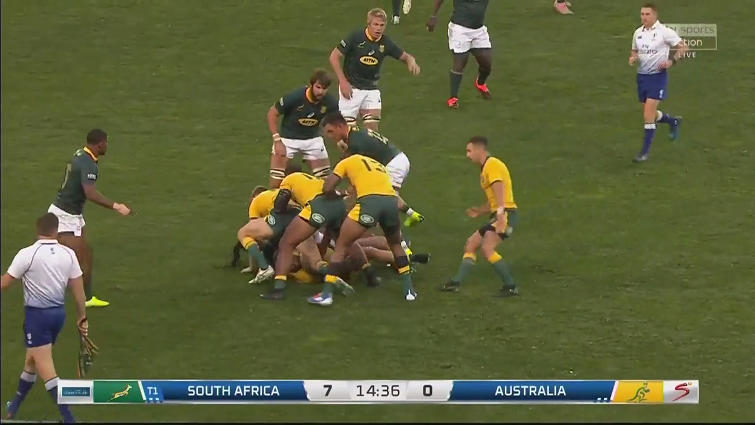 After one of the Wallabies’ rare forays into the 15-metre channel, all of Reece Hodge, Samu Kerevi and Tevita Kuridrani are consumed at the ruck and out of the next phase attack. Only one Springbok defender (right wing S’busiso Nkosi) is buried at the bottom of it, so that is advantage South Africa.

Other issues were associated with the timing of the support play in flat-line attacks:

Naisarani makes good yardage on the first flat ball off Genia, but there is no time for the support players to regroup after the next surge by Salakaia-Loto, and that is a consequence of the lack of depth of alignment: 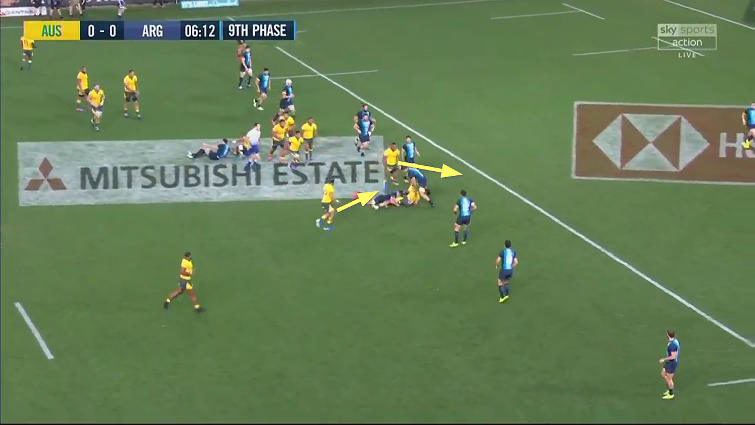 Tevita Kuridrani is already past the Wallabies blindside flanker as he goes to ground and has no realistic angle of entry to the tackle zone. That leaves number 10 Christian Lealiifano with the unenviable task of removing an established Pablo Matera over the ball.

Likewise, there is a teething problem connected with Naisarani’s body height in contact. He likes to keep the legs pumping to get maximum yardage, but that means he can also be held up and ‘choked’ successfully by the defence. He was repeatedly targeted by both Argentina and South Africa with high tackles:

When the ball-carrier stays above ground, there is no offside line for the defenders, who are free to slip around the back of the runner and seal him off from his friends.

It also creates an issue for Michael Hooper, who is not the sort of number 7 who wants to remain upright in a contest of muscular endurance against much bigger men: 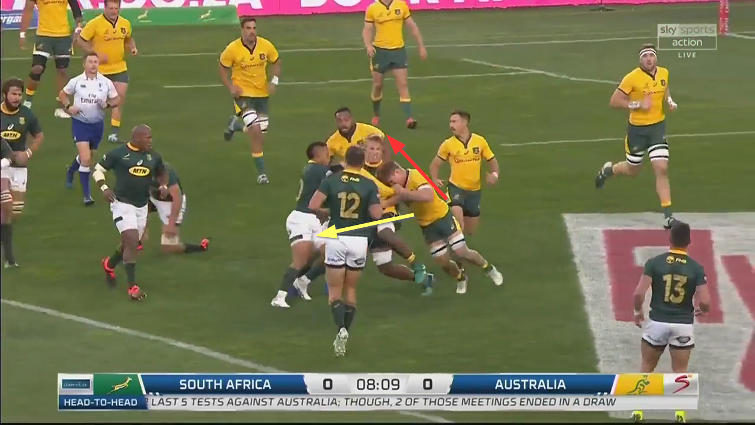 Hooper is at his dynamic best driving forward with his body parallel to the ground, not standing up to the likes of Pieter-Steph Du Toit in an arm-wrestle!

There were signs of distinct promise when the stars aligned in Shaun Berne’s offence; when they can put Naisarani and Kerevi together in successive phases, and when they are lean and efficient at cleanout time:

Naisarani has driven the ball up from the kick-off receipt, and Kerevi overcalls to get the pass from James Slipper. He has spotted a nice seam between number 6 Rynhard Elstadt and number 12 Andre Esterhuizen. At the tackle, it is two versus two – good numbers for Australia.

At the next cleanout, Australia also get what they want – both South African centres have been attracted to the ruck on the far side, and it has only taken two Wallabies to clear it out. 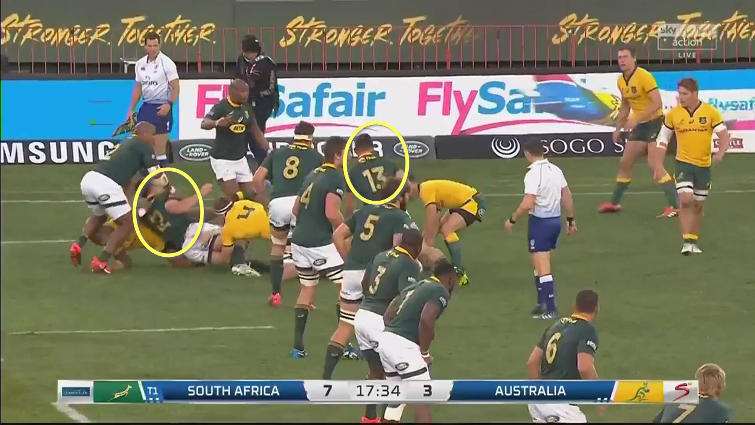 That means Kerevi will enjoy an even bigger target for his next upfield run:

This time Kerevi runs between the two Bokke flankers (Elstadt and Du Toit) to create a genuine scoring opportunity for the Wallabies.

Summary
Shaun Berne’s offence has shown some signs of life in the first two games of the Rugby Championship 2019. In the absence of Israel Folau in the wide channels, the Wallabies have flattened out and shortened up their attack.

Most of the play now comes off 9 rather than 10 or 12, and there are bigger ball-carriers at 8, 6 and 12 to bolster the physical presence needed to implement the new style. Adventures in the 15-metre channels are more carefully rationed than they were under the previous attack coach, Stephen Larkham. Even the role of Kurtley Beale is different under Berne.

There are still some significant teething problems which may take time to resolve. Creative resources like Kepu in the forwards and Kuridrani in the backline are under-employed as cleanout artisans.

The Wallabies don’t risk many one-man cleanouts (less than ten per cent of the total in the two games so far) even when the second or third men are unnecessary at the tackle site, and this limits their attacking efficiency. Thus far, only Rory Arnold appears comfortable in one-on-one removals.

In the back row, there are as many issues with the offensive contribution in contact from number 6 as there are on the other side of the ball, and Isi Naisarani’s high carrying style does not always bring the ball to deck in time to avoid turnover. This is important in the context of the World Cup pool game against Wales, who boast several experts in high tackling technique.

Overall, there is a reasonably solid core to the Australian attacking game. Naisarani and Kerevi can carry with genuine power, and both Genia and White are quite capable of setting up play off 9.

Is there time for the offence to find that extra five per cent fully in time for the World Cup? Is there time to clean those unpleasant corners and remove all of the concealed lines of dust? The double-header against the All Blacks will probably tell the tale. Judgement day has arrived earlier than Michael Cheika would have wished.