Sunday afternoon is where boys will become men in Round 21. Excuse the Phil Gould style cliche, but my goodness what an afternoon of footy we have, to cap off what should be another excellent weekend. Here to guide you through it all are The Roar’s NRL expert tipping panel.

When you think of the teams you want to see playing rugby league as a neutral at this time of year, it’s those who are going to be making their way deep into September.

So the fact that the top four are all facing off on Sunday afternoon in what could well be a couple of previews for Week 1 of the finals should be mouth-watering for NRL fans.

The Raiders, with club veteran, legend and stalwart Jarrod Croker playing his 250th game, will host the Roosters in a monstrous clash, before the Rabbitohs look to work on their ailing form line with a not suspended Sam Burgess against the juggernaut that is the Melbourne Storm.

And while the Sunday afternoon games are the headline acts of Round 21, you can’t go past the rest of the games either, with a Queensland derby, desperation stakes on Friday and a huge Saturday clash worked into the round.

The matches being referenced are of course the North Queensland Cowboys vs Brisbane Broncos on Thursday night, which again, has finals implications and should be a belter, before the Panthers host Cronulla at the footy of the mountains on Friday, and the Eels taking on the reeling Knights in Parramatta on Saturday.

In the weekend’s other matches, the Sea Eagles will cross the Tasman to play the Warriors, the Dragons host the Titans in a match which could flip expectations about the spoon should the Red V not get up, and the Bulldogs will face the Tigers.

In tipping, it was average scores across the board last week. The Crowd managed to grab six, while AJ, Stuart and myself all ended with five. Barry rounded out the field with four.

A bit of a flopper to start with on Thursday with the underwhelming Cowboys facing underwhelming Brisbane. If North Queensland lose, Paul Green will go full #refsfault, and if Brisbane loses Anthony Seibold will blame everyone except himself. Who wins? Who cares! I just want to get to the post-game. If I must choose, give me the Cowboys.

The early game on Friday may produce the upset of the season if the Warriors have any pride in themselves. But Manly are on the top four hunt and they should get the job done.

No James Maloney, no Penrith, even with Viliame Kikau back. Sharks to win.

The Dragons will destroy the Titans and the Knights will get a vital two points against the Eels. They have to – if they lose, they’re in serious trouble of missing the finals.

The Tigers and Dogs are both in good nick and it’ll be an interesting one on Saturday night. Tigers, just.

My beautiful Raiders will put at least 48 on the hapless Roosters, who have barely won their last three games by a mere total of 98 points. Pathetic. 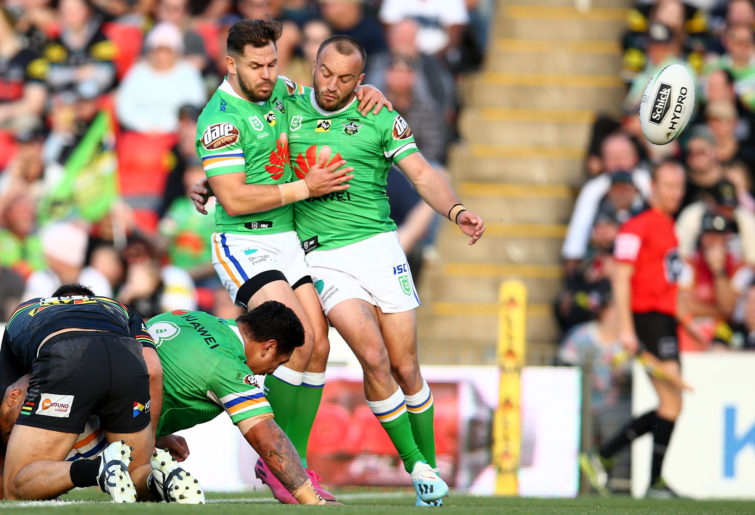 To finish, the Bunnies grip on the top four will be made much looser when the best team in the 2000’s rout them on the Central Coast. Souths need to start getting better.

With five rounds to go, I don’t quite need a miracle yet but consistency would be nice.

The game I am most looking forward to is the clash of the Raiders and Roosters at GIO Stadium. Are Canberra potential premiers or pretenders? I’m backing the Green Machine at home in front of a good crowd.

The Queensland teams are smelling like week-old prawn shells at the moment. Cowboys at home against Brisbane with some luck on their side.

The Sea Eagles supporters are talking grand finals again. Not sure about that but they should be too good for the Warriors.

The Sharks have their teeth and Wade Graham back and Penrith are without Maloney and were beaten by the Bulldogs last start. Cronulla. 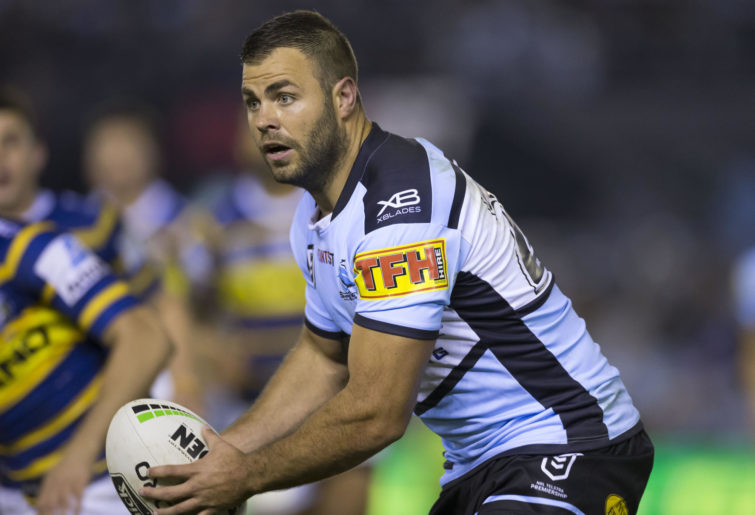 Surely the Dragons can beat a woeful and listless Gold Coast Titans side but who knows. St George Illawarra

The Eels were in good form last week against the Dragons and I expect them to beat Newcastle who have lost their way.

I have a feeling the Bulldogs will be up for this game against the Tigers after winning last week and it spells danger for Wests. I am going for the black, gold and whites but they will have to be at their best.

The results from the NRL judiciary are remarkable. Sam Burgess has escaped suspension. Let’s hope he concentrates on footy from now on. Despite this inclusion, the Storm are looking ominous at present and will win on the Central Coast.

Somebody stop the fight. After the past month of tipping, I’ve been battered from pillar to post. I can’t get anything right and am struggling to get runs on the board. Now I know how Moeen Ali must feel. (Scott’s note: I want to change my tips now, because you know, we have seven out of eight games the same.)

Remember that stunning series of games between the Cowboys and Broncos a few years back? This is unlikely to be one of them. The Broncos were poor last week but I just can’t tip the Cowboys again after their insipid display.

Can’t tip the Warriors either. A couple of weeks ago, the narrative was how the refs had ruined their game, their season, their lives. A great way to prove it would have been to put in a big performance against the Raiders but they failed to show up.

Are the Sharks back? A big win against the Bunnies last week sees them back in the eight. Both teams have a lot to play for here, making this a “four-point” game. Despite the Panthers recent winning run, I think the Sharks are travelling better and will win here.

Speaking of teams you can’t tip. Hello, Titans. After a pretty rough month, the Dragons should get back on the winner’s list. They’ve got a tough run after that before meeting the Titans again in Round 25. 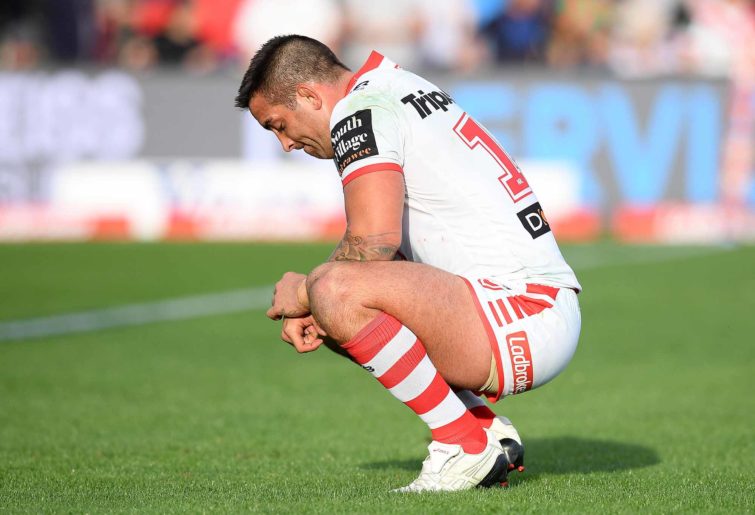 With five losses on the trot and currently sitting 11th, it’s desperation time in Newcastle. Nathan Brown is dropping blokes, sacking others, switching positions. But he apparently still hasn’t found the answer to rugby league’s most intriguing question… Where to hide Kurt Mann?

A heroic defensive effort from the Dogs against the Panthers last week. DWZ for buy of the season? Anyone? Anyone? I like what the Tigers have been doing lately but I’m going for an upset. Why? Because I haven’t tipped the Dogs for ages.

Sunday sees a couple of games crucial to the make-up of the top eight and more importantly the top four.

The Raiders have put together an impressive season to date, however, the elephant in the room is that they’re 0-4 against the top five sides. They get their chance to correct that over the next month and we’ll really know how they’re positioned. The Roosters are still missing Friend, Cordner and Taukeiaho. Raiders at home. Happy Geoff?

Plenty of doom and gloom around for Souths supporters at the moment – particularly from Souths supporters. Wayne Bennett is a master of timing a team’s semi-final run and he’ll have this game pegged as one of the team’s markers in that run. I think the Storm will win but we’ll see an improved showing from Souths and this may be a turning point in their season.

What a weekend this is about to be. So many good games, and it’s a bit like who knows where to start, so let’s just run through in chronological order.

I’ll take the Cowboys at home to beat the Broncos in the derby, one of the best rivalries in the NRL. Both teams always stand up for these matches, but I really wasn’t impressed with what the Broncos dished up last weekend.

The Sea Eagles make the trip to Auckland, where they will find a decimated Warriors outfit with very little left to play for. I expect Des Hasler’s men to return with two points. 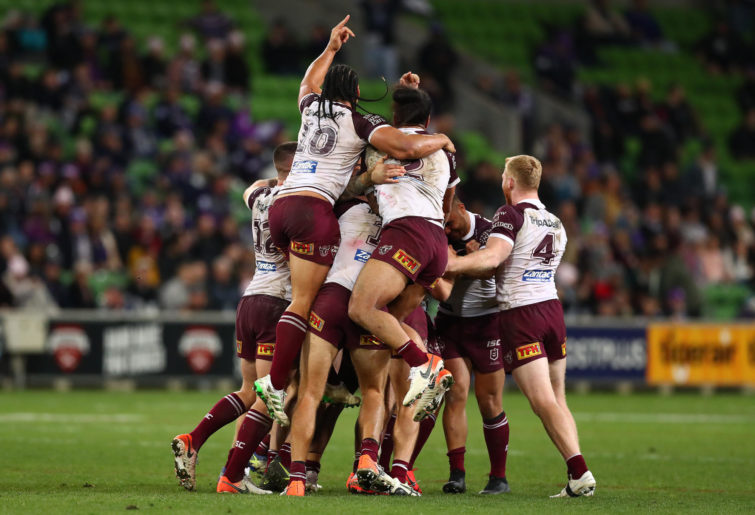 The second Friday game could be the most important of the weekend. It shapes as a real struggle for Penrith though, who have to get their misfiring attack working against a determined and gritty Cronulla defensive line. I’ll take the Sharks.

St George Illawarra and the Gold Coast play twice in the last five weeks. If the Dragons lose both, they could end up with a wooden spoon, but if that happens, you might as well shut the joint down. The Titans are an absolute shambles at the moment.

I’ll take Parramatta to get the better of an ordinary Newcastle simply because they are at home, ending the Knights finals push in the process, while the Tigers haven’t impressed me one iota. It’s hard to see them breaching an improved Bulldogs defensive line, so I reckon they will win and move further away from the bottom.

Sunday is where it’s really at during Round 21 though.

At home, I’ll take the Raiders to break the Roosters winning streak, but this game is a real flip of the coin job. It’s hard to split the two in-form outfits.

In the other game, the Rabbitohs just haven’t been all that good in the last couple of weeks. The level of talent and class they have is undeniable, but it’s hard to see them matching it with an outstanding Storm outfit who woke up last week, recovering with a thrashing of Brisbane.