Whether you have realised it or not, we are now watching a new generation of AFL footballers who can kick goals like Tony Lockett, mark like Wayne Carey and gather the ball like Robert Harvey.

They are packaged to do it all and Marcus Bontempelli is at the forefront.

The 23-year old has leveled up his skill set each season since his debut in April 2014 and looks set to explode toward greater heights as an elite jack-of-all-trades made for the modern AFL landscape.

You only need to look at last week’s three-goal loss to the Lions where he collected 35 touches, five marks, seven tackles, five inside-50s and a goal to believe it.

The Bont was drafted by the Western Bulldogs seven years ago at pick No.4. – a draft known for Tom Boyd and Josh Kelly going to Greater Western Sydney at picks one and two.

At 83 kilograms, recruiters labelled him the next Luke Hodge with a strong kick and a good read on the play. They said he was one of the more polarising players as a tall, talented midfielder with size and versatility.

In 2019, Bontempelli stands at 193 centimetres and 93 kilograms, but back then, he was just a fledgling footballer with hope, dreams and everything in front of him .

It didn’t take long for Bontempelli to alert the AFL competition he had arrived. In 2015, his second year, the midfielder collected 27 touches, six grabs, ten tackles and sent the ball inside 50 eight times to help defeat Richmond by 19 points in Round 2.

He averaged 21 disposals that year and was voted the best young talent by the AFL coaches. He was seen as the Bulldogs’ marquee player. Amid the hype, Bulldogs list manager Jason McCartney told The Age: “There are no fluctuations, his demeanour around the club is always the same.”

This year, Bontempelli has shifted gears. He’s hitting career game highs in almost every statistical category, averaging 26 disposals, four and a half marks, five and a half inside-50s, six clearances and two rebound-50s. 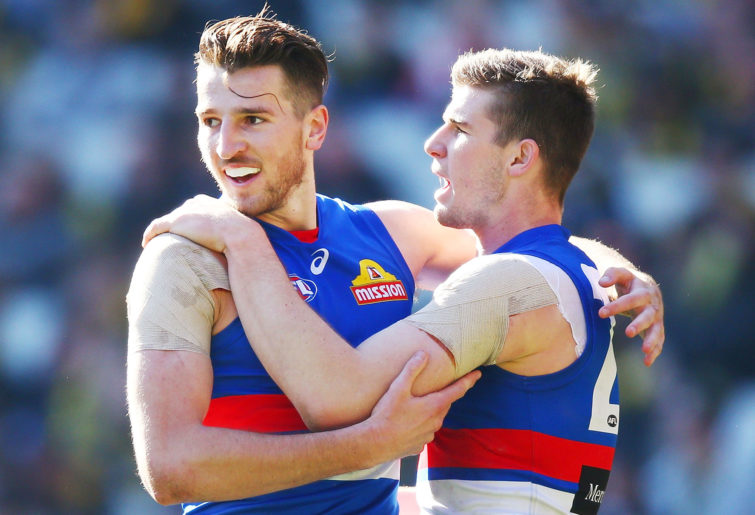 He’s ranked fourth in the AFL for inside-50s, seventh for centre clearances and is the second best player for metres gained, averaging 521 per match. He is rated by the AFL as the sixth best player in the competition.

The numbers tell us his skill set covers the entire ground. He’s not just a clearance specialist from centre bounces. He rebounds. He runs to be that marking option out of defence and because of his size, he can be an extra tall option. He kicks goals.

Probably the best skill of all is that he creates scoring opportunities. This is why he’s become the exhaustive, modern AFL player.

Don’t take my word for it. Watch how he plays. That will tell you everything you need to know about him.

During the 113-66 win over Fremantle, Bontempelli won a rushed centre clearance kick that landed 60 metres from the Bulldogs goal. He followed up and picked up the loose ball, took a few steps and launched a kick from outside 50 that went through for a goal.

That’s how the superstar can rip teams apart and there’s no way to stop it.

A 2018 ESPN article on AFL trends explained the changing nature of Australian rules football, where roles like the ruckman who stand at 203 centimetres are asked to roam forward and play key positions.

“The AFL is transitioning towards a positionless game, with forwards and defenders covering more ground than ever before and sides playing non-traditional set-ups with smaller players often filling the once traditional key position posts,” Chris Doerre wrote.

Traditional roles still exist, but they come with shades of grey. Players are asked to do more. For example, a back pocket used to be more of a shut-down player, but now on top of that, they might be used as a rebounder that can kick goals. 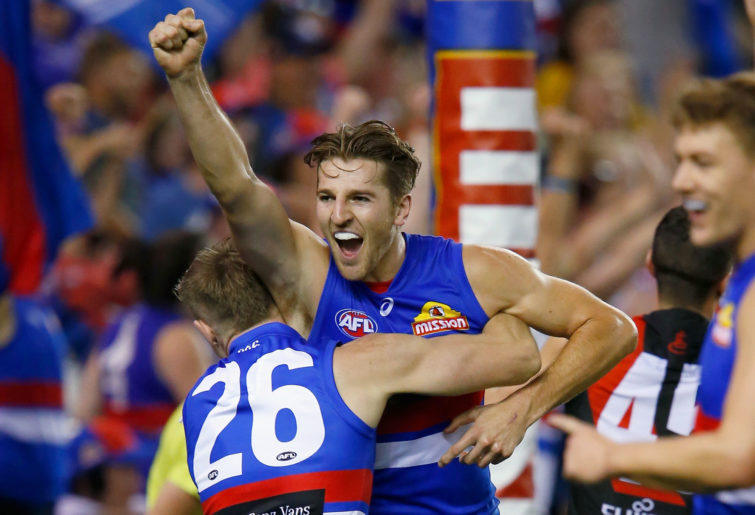 In 2008, I remember Terry Wallace – call him a pioneer of the positionless player – sending Matthew Richardson on to a wing for large parts of that season.

The 197-centimetre forward looked out of place initially, but when he won the ball, it looked natural and begged the question: why not create a mismatch in areas where you need to win the ball? It made sense.

And here we are today with Bontempelli – 193 centimetres – playing as a regular on-baller.

Bontempelli’s length, athleticism and ball-handling make him the kind of player that can do almost anything.

He’s clean with the ball as if he’s picking up a round basketball off the floor. He’s a line-breaker and hard to match-up on. This makes him entertaining to watch.

He’s debunked criticism over his perceived inconsistency this year by producing a season with no ceiling in sight.

Everything about the way the 2016 premiership player goes about the game is entertaining and fascinating to watch. It’s like he has a switch he can flick to go into beast mode.

It’s only a matter of time before he wins a Brownlow Medal. That shouldn’t surprise anyone. He’s won two best-and-fairests at the Bulldogs, a premiership and a handful of other achievements.

And he’s only going to get better from here on in.

You get the feeling Bontempelli is still figuring out how to really bully teams and how he can be truly terrifying on a football field.

Think about his development in his 123 games and what the next 150-odd games will bring.

It’s only a matter of time before Bontempelli becomes the king of the AFL.