With 11 losses and a final-round road game against a West Coast side likely to be fighting for a top-two finish, the Hawks’ chances or finishing in the top eight are extremely slim.

The Giants, on the other hand, are all but locked in for a fourth-straight finals appearance and still have a shot at a precious top-four finish.

On the surface, this doesn’t seem like a particularly captivating game, but there is one very good reason to get excited: SNOW GAME!

With the temperature in Canberra tipped to be in low single-digits, it’s possible – albeit not probable – that tonight’s match could be played in and/or on snow. Just the thought of it makes me giddy, particularly with the added element of the Hawks’ macho no-long-sleeves rule.

After holding on against the Swans for a two-point win, the injury-ravaged Giants welcome back Coleman Medal leader Jeremy Cameron, but lose their next two leading goalkickers in Jeremy Finlayson and Harry Himmelberg. Connor Idun also goes out after one game. Adam Kennedy and Dawson Simpson are the other inclusions.

The Hawks have also made three changes, with Grant Birchall going out – for what might sadly be the last time – along with Ben McEvoy and Conor Nash. James Cousins, Jonathan Ceglar and debutant Changkuoth Jiath come into the side.

Last time these sides met, the Hawks bored everyone – including the Giants – to death with a slow, deliberate game plan that, to their credit, earned them the four points with a 33-point win. 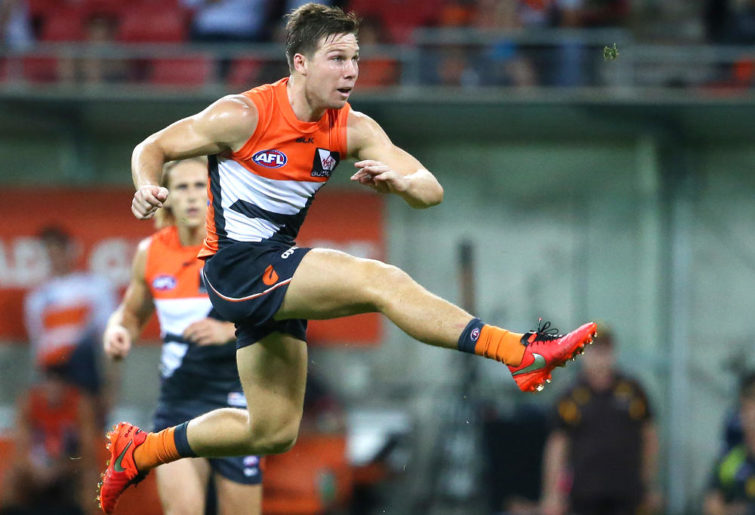 All Australian contender Ricky Henderson was arguably the game’s best player on that day with 36 disposals, which included 22 kicks and seven inside-50s. James Sicily – also in the team of the year mix – was also brilliant with 27 touches and a goal.

Finlayson (17 touches and three of the Giants’ five goals) and Josh Kelly (26 disposals, seven clearances, six inside-50s and nine tackles) were GWS’s two best players in the loss. Unfortunately for tonight’s home team, neither of those players is in this week’s line-up.

With Kelly, co-captain Callan Ward and superstar Stephen Coniglio sidelined, GWS have had to shake things up in the midfield. Tim Taranto and Jacob Hopper have taken on a greater load, but the latest move has seen Zac Williams shifted from the back third to the middle of the ground, and the fleet-footed Williams has responded with career highs in disposals, clearances and marks against the Swans last round.

The Hawks have also had to find midfield solutions this season. Already light on ball-winners, the midfield brigade got even thinner when reigning Brownlow medallist Tom Mitchell snapped his leg in the preseason.

Jaeger O’Meara has stepped up, averaging career-best numbers in disposals, clearances and contested possessions. But it’s youngster James Worpel who has been the biggest revelation this season.

Worpel is averaging an impressive 26.3 disposals, 11.6 contested possessions, 5.8 clearances and 4.3 inside-50s. Those are super numbers, and his past fortnight – in which he’s averaged 35.5, 14.5 and 9 in those aforementioned categories – has been brilliant.

The Giants are second in the league for clearance differential this season with a +4.7 average, while the Hawks are second last at -6.8. Just how those numbers stack up tonight with so many GWS star onballers in the stands will be fascinating – the Giants are also the league’s best contested possession team (+12.5).

This game means a hell of a lot more to the Giants than it does to the Hawks, but GWS might just have hit a tipping point with their injury list, and the Hawks – who have named this round’s third-most experienced team – aren’t a club that punts games away.

Nonetheless, I’m tipping the Giants by 20 points and praying that it snows.