Manchester City won the 2017-18 Premier League crown at a canter, but their title defence last season panned out much differently.

Liverpool’s sustained brilliance and endurance in their quest for a first league title in 29 years saw the Merseyside outfit post 97 points but still succumb to Pep Guardiola’s imperious City.

Throughout a stunning 14-game winning streak to close out the title, a sense of inevitability and assurance was evident despite injuries to key players and the relentless pressure from Liverpool.

Yet on the European continent, this winning machine has struggled to replicate the same conviction and excellence it so often demonstrates domestically.

City’s opening day 5-0 demolition away to a hapless West Ham was a reminder of how difficult it will be for the rest of the Premier League to deny Guardiola a record-equalling three consecutive league titles.

There is almost an air of invincibility surrounding City, such is the momentum and sense of inevitability with every masterful performance. But City have struggled in Europe.

Strangely, Guardiola continues to stress domestic supremacy over any potential triumph in the Champions League, and while this is probably a diversionary tactic to eradicate any more external pressure on the club, a club that is conquering the globe off the field ought to conquer Europe on the field soon.

City’s exit at the hands of Tottenham in the quarter-finals lasts season means Guardiola has failed to reach the semi-finals in any of his three completed European campaigns at the Etihad Stadium, knocked out the last two times by English opponents in Spurs and Liverpool.

Call it wretched luck or fate, but the reality is that City’s Champions League fortunes have been symptomatic of both the illogical and anarchic forces this competition tends to conjure with little respect to the structure and order of league positions. 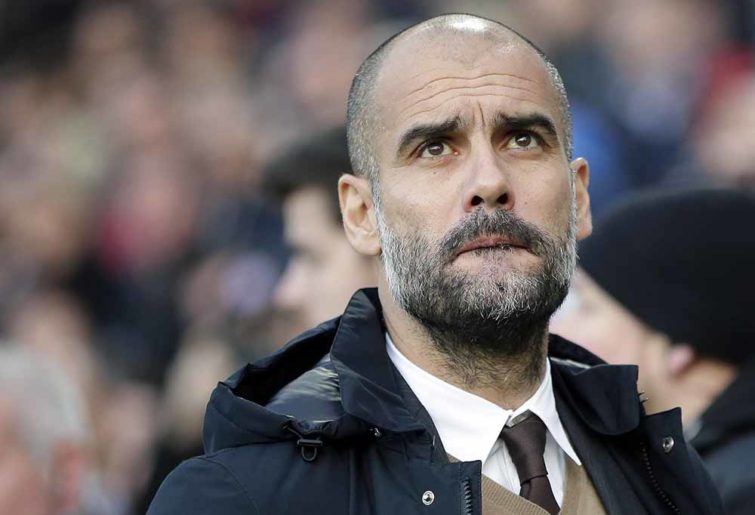 It happened to Arsene Wenger’s Invincibles and nearly happened to Chelsea’s Improbables and continues to occur to PSG and City. No team has a divine right to win the most hallowed trophy in European club football, as it takes a combination of experience, fortune and timing.

Pep’s struggles against English teams are not confined to the last two years. Despite having the likes of Lionel Messi, Xavi and Andres Iniesta at their peaks and seeing Chelsea fall to ten men at the Nou Camp in the second leg of Barcelona’s 2012 semi-final, they could not find the moment of clarity and incision needed against a resolute defence.

For all the Catalan giant’s famous probing and relentless pressure on the ball where they enjoyed 82% possession and registered 23 shots on the night, the remarkable feat of escapology demonstrated by Chelsea seems to have inflicted insufferable damage to Guardiola in the long term.

Almost the same scenario had presented itself two years before when Inter Milan prevailed on aggregate at the Nou Camp despite Thiago Motta’s dismissal on a night of high emotion and drama against a peak Jose Mourinho side.

Barcelona once again could not overcome a regimented and resilient defence against a team looking to complete a job by spoiling and disrupting in the second leg after gaining the ascendancy at home. It is almost as if Guardiola knows he is cursed.

It is difficult to pinpoint Pep’s weakeness when the football is so elaborate in its tactical planning yet so simple and effective in its execution. The possession, the distribution, the high press and the technical quality that knits everything together is the most entertaining, innovative and successful on offer in the modern game.

There are teams who rely on a handful of individual stars, there are teams who attempt to play on the front foot dominating possession and there those who play pragmatically, but only one team in the world play with the same organised freedom and panache as Manchester City.

This is what makes it all the more perplexing as to why City’s caution in the first leg against Tottenham seemingly caused them to play with the handbrake on, with little evidence of their usual rhythm and fluency.

The departure of club legend Vincent Kompany as well as the long-term injury suffered by Leroy Sane will be losses that Guardiola and City will inevitably feel throughout the season.

However, the embarrassment of riches that has been strengthened by the likes of Rodri and Joao Cancelo’s arrivals are sensible pieces of business despite the significant sums of money. Rodri will provide competition for Fernandinho immediately as well as long-term longevity as the vital central pivot in the middle of the pitch.

Strength in depth here may well be the missing piece of the puzzle as Guardiola can now afford to cover injuries and suspensions or rest either during periods of busy schedules. Cancelo will give vital competition to Kyle Walker as cover in advanced areas to cover the loss of Sane, as well as allowing Walker to make a possible transition to centre half in a similar mould to Sergio Ramos.

With this being David Silva’s final season and with Sergio Aguero’s City tenure drawing closer to the end, Manchester City need to make this season the year when they finally become champions of Europe.

Aguero’s goals and Silva’s ingenuity will not be available forever, and thus, Guardiola needs to find the right balance between sustaining an adequate title defence as well as having the necessary personnel available and firing during the latter stages of the Champions League.

There was an awkwardness to City’s tentative approach to their quarter-final first leg against Spurs. Playing within themselves with greater pragmatism was uncharacteristic but not necessarily wrong or foolish.

Guardiola’s needs to provide clarity in the knock-out rounds when the pressure is on in terms of the tactics – stick to the usual game plan or revert to a more cautious and pragmatic style throughout the tie, or strategically at home or away.

The same pragmatism won City the league last season when considering the altered approach to games against Liverpool. This suggests City can indeed adapt their game plan to simply just win the game.

More of the same this season in Europe will be needed to overcome any potential mental scars from years gone by.