Barty slices past Sharapova in Cincinnati

Top seed Ashleigh Barty has “sliced and diced” her way past Maria Sharapova in straight sets to advance to the third round of the Cincinnati Open.

The world No.2, who had suffered a slump since her early exit from Wimbledon last month, comfortably outsmarted the former Cincinnati champion, winning 6-4 6-1 in one hour and 27 minutes on Wednesday.

“If I had played against her best game like when I was just coming up, like a Henin or someone that sliced and diced and had a lot of variety, it was very tough for me.”

Barty will next face Anett Kontaveit after the Estonian beat Pole Iga Swiatek 6-4 7-6 (7-2).

The Australian, keen to avoid a second consecutive opening defeat after her loss to Sofia Kenin in Montreal last week, kicked off proceedings by taking a 1-0 lead.

But Sharapova saved two break points before Barty’s errors allowed her to level at 1-1, before surging to a 3-1 lead.

The French Open champion then brought the Russian to the net before smashing a backhand across the court to make it 3-2.

Sharapova’s errors levelled it at 3-3, with Barty then following a sublime backhand slice with a forehand winner to make it 4-3.

Sharapova levelled again but Barty served it out to lead 5-4 before the Russian put the ball over the baseline to hand her the first set.

Barty raced to a 3-0 lead in the second, but Sharapova pulled one back before over-hitting a return to put the Australian up 4-1.

The world No.2’s drop shot brought Sharapova to the net, before she exquisitely lobbed the ball back inside the Russian’s baseline to make it 5-1.

The 23-year-old then served it out for the win.

World No.3 Karolina Pliskova claimed a dominant 6-1 6-3 win over China’s Yafan Wang and will meet Sweden’s Rebecca Peterson in the third round.

Croatia’s Donna Vekic booked a match with Venus Williams after her 6-2 7-5 win over former world No.1 Victoria Azarenka, while Elina Svitolina defeated Elise Mertens of Belgium 6-4 6-1.

'Do you ever have any positive questions?': Kyrgios' testy answer to injury query

The Aussie was exhausted following his 5-set epic with Karen Khachanov. 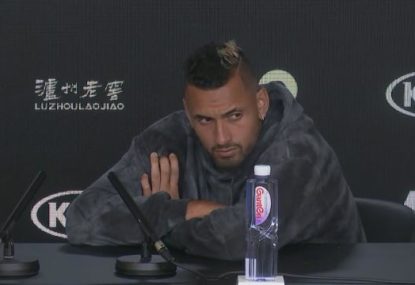 'Do you ever have any positive questions?': Kyrgios' testy answer to injury query

French Open champion Ashleigh Barty will look to overcome Alison Riske, who beat her Wimbledon last year, in the Australian Open’s fourth round.

Pass the popcorn. The most anticipated match of the 2020 Australian Open will play out on Rod Laver Arena on Monday as bitter rivals Nick Kyrgios and Rafael Nadal meet in the fourth round. 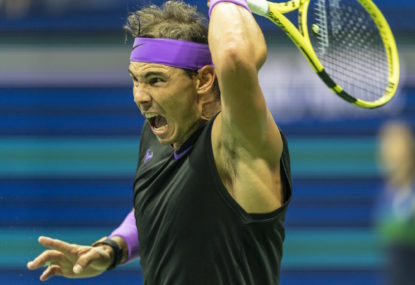 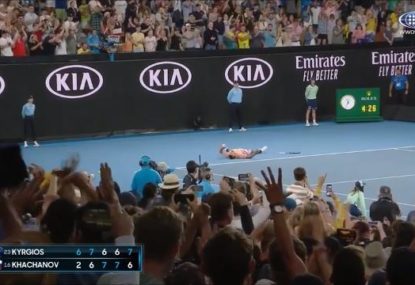 'Are you stupid?' Kyrgios blows up at chair umpire after copping contentious time violation

Was Nick right to be aggrieved? 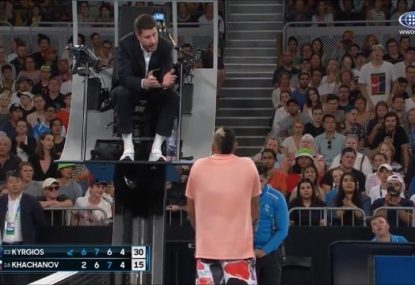 'Are you stupid?' Kyrgios blows up at chair umpire after copping contentious time violation