It was a coach-killing loss. The whole club needs a clean out. John Worsfold needs to show some raw emotion and look more invested.

It’s a broken football club. And Worsfold has two weeks to save his job.

These are some of the things that have been swirling through the press circuit and on social media since the Bombers capitulated by 104 points to the Bulldogs at Marvel Stadium last week. Yet, despite Essendon’s frustrations and inconsistency, I still think John Worsfold is the man to lead Essendon to the club’s first premiership since 2000.

In four years, Worsfold’s message has rarely shifted. If you’ve watched all of his post-match pressers and even the mid-week huddles with media, the message is usually this: he wants to build a team that’s not only worthy of vying for a premiership, but a team that will be good for many years.

If we were to peer inside Worsfold’s head, the ideal Bombers team is quick, skillful and contested ball pigs; wins are dominant. When winning, the successes are attributed to “playing our brand of football.” Winning means being stingy in the backline and starving opposition goals. And kicking goals will come in the form of multiple forms. But it’s not easy to unravel 15 years of uninspired Essendon football.

After winning seven of eight games, followed by two hulking losses, the Bombers sit shakily in seventh spot. Another win could see them play finals but most of this season Worsfold has been under siege for things like Essendon’s 3-5 unwelcomed start, sluggish build-ups, wrong options, dropped marks and not getting the best out of a team that had the fourth best list according to Champion Data.

And in 2019: The club is still trying to find its identity after the ASADA crisis.

One can only assume Worsfold was hired to help win a premiership and not become just a caretaker coach to lift the Bombers from the fog. Throughout his tenure fans and media critics are divided on Worsfold’s ability – or inability – to lead Essendon and to tactically match it with the best teams.

On one hand the Bombers have developed and found good youthful players this year in Mason Redman, Dylan Clarke and Matt Guelfi and their best football can match it with anyone; on the other, they are ranked 4th for clangers and continue to make bad decisions that cost them goals. But what’s really changed under Worsfold?

Aside from the 3-16 season in 2016, Worsfold has added two seasons of 12 wins including a finals berth and could finish this year with another 12 wins. It’s steady, middling, but not terrible.

He’s improved the contested ball wins from being ranked 17th in 2016 to 9th in 2019. Standing back and looking at all of this anyone can see how Worsfold is trying to piece together a list that will compete in the modern game; a team that could win a premiership. But building a competitive list takes time.

If you looked at what Damien Hardwick did at Richmond, and what Bomber Thompson did with Geelong, it has shades of what Worsfold is doing with the Bombers.

Before winning the 2017 flag, Hardwick and Tigers fans endured seven years of promise and failed campaigns and Hardwick himself survived major internal reviews and increasing pressure to perform. But then things clicked.

For Bomber Thompson, it also took seven years for him to win a flag at Geelong in 2007, after four middling years of 12 wins, 9, 11 and 7. It’s not to say that things will automatically happen for Worsfold but list building takes time. It’s a patient man’s game.

There’s no such thing as an overnight success. Teams that rise to the top have done so by building a list through trial and error until it all clicks. 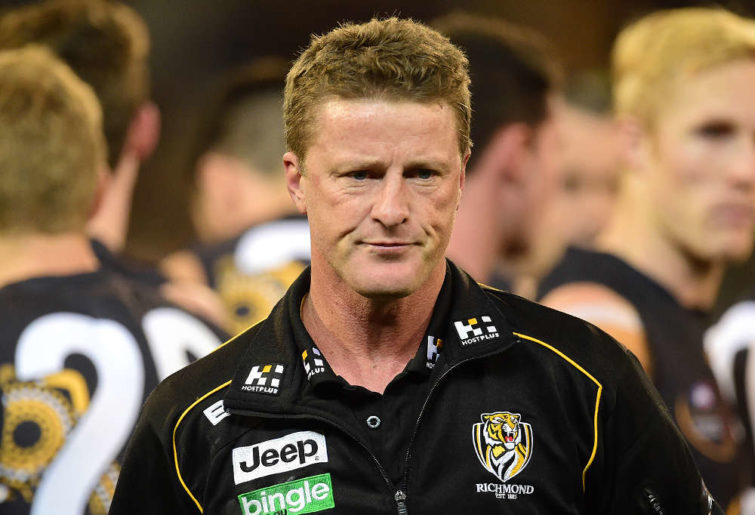 The problem for Worsfold is that he walked into a broken club after the ASADA supplements investigation.

In the history of football there’s been no real blueprint on how to successfully recover from this. But this is something he was built for.

If you remember, he joined the Crows after Phil Walsh was tragically killed and began as an interim coaching director. And with the Eagles he navigated through two 4-18 seasons post Grand Final win in 2006 and got them back to a Preliminary Final and Semi Final before retiring.

In 2019 injuries have stymied Worsfold’s Bombers’ projection. The loss of key forward Joe Daniher and grunt midfielder Devon Smith set things back a couple of months into the year. And ever since then it’s been a revolving door of hamstrings, shoulders, season-ending ailments.

This is out of Worsfold’s control. You take 12 starting players out of any AFL line up and you’ll most likely have the same sub par results. But are the Bombers a team that was built to win today? Absolutely not.

Despite some adjustments, Essendon has performed the same ritual for the past three years now with pluses and minuses in different parts of their game. But if there’s one thing that’s a guarantee, is that Worsfold will stay the course because that’s who he is and he has a track record of staying the course.

Now it’s time for the players to stand up.