It took Josh Hazlewood just two deliveries. After Jason Roy flirted with a wide loosener first up, Hazlewood’s next ball on his return to Test cricket was a ripper that landed on a length, seamed away and opened up Roy like a clam.

Just like that, the tall right-armer had settled back into his happy place. Very few quicks in world cricket land the ball where they want with the consistency of Hazlewood.

When he first arrived in the UK, for the 2015 Ashes, he did so with a swollen reputation as an incarnation of Glenn McGrath. While his talent was obvious, Hazlewood was just 24 with a mere five Tests to his name.

Expectations he would land in England and dominate were fanciful, considering he had never played a first-class match in the UK prior to that tour.

Perhaps seduced by the sharper swing offered by the Dukes ball, Hazlewood bowled fuller in that Ashes than he has in any other series in his Test career. Too often he over-pitched, floating up deliveries that swung too early or offered prime opportunities for drives.

Rarely did he find that in-between length that is his calling card, and upon which McGrath built his career. Good cricketers learn from their mistakes and Hazlewood deserves that description.

In his first spell last night, he immediately located that not-quite-full, not-quite-short length that traps batsmen on the crease. Allied with the disconcerting lift he earns from his tall action and 197 centimetres of height, this makes Hazlewood a terror. 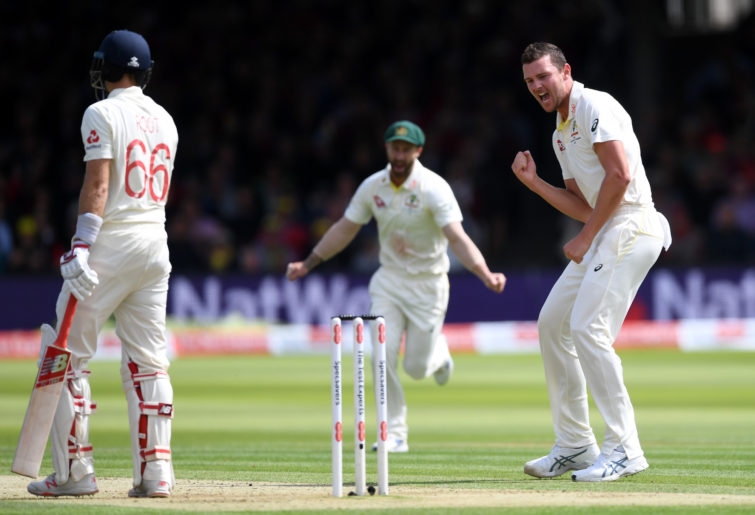 Batsmen who come forward risk the ball leaping up at the shoulder of their bat. Those who go back make themselves an LBW candidate for Hazlewood’s off cutter.

When Hazlewood finds this length he takes control of proceedings, drying up all scoring opportunities and placing the batsmen in a fight for survival.

Six overs, three maidens, two wickets for five runs. Those were his figures with the new ball last night as he made a resounding comeback to the top level at Lord’s, having been overlooked for the first Ashes Test in favour of Peter Siddle and James Pattinson.

That pair of quicks were solid at Edgbaston as Australia took a 1-0 lead. At no point, though, did either of them operate at the rare level of excellence that Hazlewood reached from the get go last night.

I still think Australia made the right choice with their first Test line-up. Siddle and Pattinson were match fit with the Dukes ball having played in the UK for the past few months.

Hazlewood, after a five-month injury layoff, seemed not quite ready. Give him another two weeks to train – plus the three-day match in between the first and second Tests – and he should be primed for Lord’s. That was my thinking, at least.

Who knows? Maybe he would have run amok at Edgbaston. Regardless, Australia now have the luxury of being 1-0 up with a fit-and-firing Hazlewood fresh back into the team.

Also, for the first time in a long time, he has a point to prove. For several years now, Hazlewood has been an automatic pick in the Test line-up when fit. Perhaps missing out on the Ashes opener may have provided the kind of stimulus that has previously awoken many a dozing giant.

On a Lord’s pitch that offered limited assistance to the bowlers, Hazlewood’s 3-58 from 22 overs was an excellent return, particularly given all of his wickets were top order batsmen.

Whether Australia’s batsmen can exploit the good work of the Aussie attack remains to be seen. But Hazlewood’s immediate impact last night bodes mightily well for the tourists.