Tips and thoughts: AFL Round 22

Seven from nine again last week, heading into a huge penultimate round of the AFL regular season with some pivotal contests, let’s get into it.

Can we not take a leaf out of the NFL’s book and flex one of GWS v Brisbane or Richmond v West Coast to this time slot? Honestly, does anyone care about what happens here? Demons will win at home.

Saturday 17th August
Carlton vs St Kilda
1.45pm at MCG
At least there’s a bit more intrigue in this one; the latest in 2019’s cadre of fast-starting interim coaches, Brett Ratten, up against his former team, led by newly appointed full-time coach David Teague.

I hate to say I told you so, but a month ago when Alan Richardson was sacked I did speculate that the Saints had some very winnable games a little too conveniently lined up for Ratten to make his case as head coach.

They’re still leaking points though (1.76 points conceded per inside 50 under Ratten is actually a little worse than the 1.73 under Richardson) and Carlton have hardly been embarrassed in the past fortnight against two of the better teams in the league.

The recent history between these teams is a story of dueling win/loss streaks, the Blues currently on the wrong side, having dropped the last five.

I think Carlton snap that skid here though, the players will be fired up, these guy absolutely love Teague and are going to be incredibly keen to start his official tenure with a win.

Brisbane vs Geelong
2.10pm at Gabba
Now we’re getting to the good stuff. Right now, the Lions are almost as hot as 1997 Gwen Stefani. Conversely, the Cats have been iffy since the bye, yet still sit on top of the ladder, have the league’s best percentage, and just held a team to the grand total of 14 points.

It feels like this is going to come down to a couple of things – 1) who wins contested possession? As I mentioned a few weeks ago the Cats are the only team in the comp this year to have a perfect split of win CP/win game and lose CP/lose game.

Obviously, Geelong have managed to come out on the right side of this equation the majority of the time this year (second in the league at +10.4 CP differential), but Brisbane are no pushovers in the contest either (fifth in the league at +4.4) and have won that battle six times during their current eight-game winning streak.

2) Does the Cats superior defence prove the difference? Geelong are conceding 66.3 points per game, no other team is below 74.4.

The Cats are at 1.35 points conceded per inside 50, no other team is below 1.44. The Lions sit in the middle of a very bunched up field, giving up 76.3ppg and 1.47 points per inside 50. Geelong were the team of the first half of the season, Brisbane have been the team of the second half (apologies to Richmond, we already knew how good you were going to be once everyone came back from injury).

Will it be the Lions coronation or the Cats reclaiming their throne? I’d be lying if I said I was confident one way or the other. I’m going with Brisbane, just, with home field and a more settled, confident line-up to prove the difference and break an eight (!) game losing streak to Geelong.

Hugh McCluggage of the Lions. (Photo by Bradley Kanaris/AFL Photos via Getty Images )

Adelaide vs Collingwood
4.35pm at Adelaide Oval
This game should tell us a bit about both of the teams involved. The Crows have to win to remain a chance at making finals, while the Pies, somewhat remarkably, and largely thanks to the past two weeks’ creampuff schedule, could conceivably be back in the top four if they win. Neither squad would really deserve to be in those positions, though, having gone a combined 6-9 since their respective byes. I’m leaning on home ground advantage again.

Collingwood’s supposed ability to travel well hasn’t extended to the Adelaide Oval, as they’ve only won one of the five games they’ve played there. If the Crows can get an early lead, they should lift in confidence and potentially get a bit of a run on against the Pies’ still depleted squad.

North Melbourne vs Port Adelaide
7.25pm at Marvel
Ah man, do we start believing in Port Adelaide as a sold finals team again? Two straight wins by an average margin of 53 points has them in control of their own destiny once more.

Port are at their best when they can overwhelm their opponents with a barrage of inside 50s, that shouldn’t be a problem against a North team that has an average differential of -12.4 in the stat over the past five weeks.

The Kangaroos have also lost their last five against the Power and will probably struggle to reverse that trend, as Port’s injury list is all of a sudden looking very clean again.

I actually feel pretty good about picking Port Adelaide this week… that could be a worry.

Fremantle vs Essendon
8.10pm at Optus Stadium
Huge gut-check game for the Bombers. Win and you potentially seal your finals spot, lose and you could suddenly be on the outside looking in. Yeah, they’ve been smashed a bit by injuries in the past few weeks, but 21 straight goals conceded?

Good lord. We’ll see what they’re really made of now. It’s all going to come down to whether the Essendon players stand up or lay down really.

Because even with the injuries they do have (not as many this week thanks to several big inclusions, most importantly Michael Hurley and Adam Saad), they should be able to beat a Fremantle squad missing plenty of key players of their own.

It doesn’t fill me with a lot of confidence, but with more to play for and a full week of (hopefully) being pissed off about how bad they were against the Bulldogs, I think the Bombers stand up.

Sunday 18th August
Richmond vs West Coast
1.10pm at MCG
The second of our two BIG matches this weekend, I’ve been pessimistic about West Coast as a true upper-echelon contender all year and I will continue to be so at this stage (that’ll change if they can beat the Tigers, obviously).

To be fair, the Eagles have a phenomenal forward line, but Richmond’s team defence is as good as any team in the league.

Plus, with the inclusion of Dustin Martin to an already well-balanced midfield, and given that we’ll be at the Tigers’ own personal palace (aka the MCG; and yes I am aware West Coast have won their last five matches there; seems unsustainable for a team with a turnover differential of -2.35 per game, tied for fourth worst in the league), it feels like Richmond are ready to throw themselves to the forefront of the conversation as the team of the late 2010s. 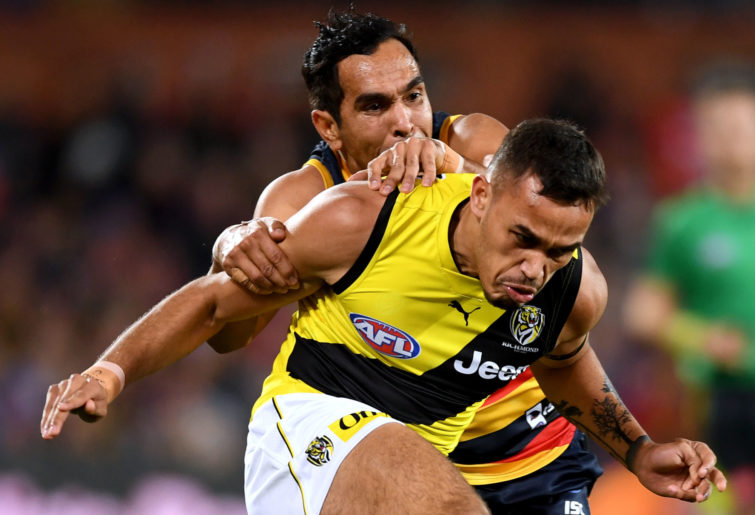 GWS vs Western Bulldogs
3.20pm at Giants Stadium
It feels like everyone has basically given up on GWS? Well I haven’t yet, I don’t care that they meekly submitted with half a NEAFL team in Canberra when it snowed at quarter time: it ain’t snowing again this week and I just don’t trust the Bulldogs to win at Giants Stadium!

GWS are bringing back half a starting midfield and one third of the AFL’s highest scoring forward line (although the unquestioned jewel of said forward line, Jeremy Cameron, drops out with injury again; a huge blow and definitely something that, if it persists, will kill any chances the Giants have of making real noise in the finals).

As much as I would love to see my personal favourite Brownlow selection, Marcus Bontempelli, cut teams apart in the finals like LeBron James holding court from the high post, I just won’t believe it until it happens.

Final note on the Bont – he has been ridiculously underrated all year, he’s now deservedly leading the Coach’s votes, but no one seems to be talking about him. If the Dogs do somehow make finals that narrative will change. But seriously, how many other players in the AFL would you take over him right now?

Hawthorn vs Gold Coast
4.40pm at Marvel
Once again, my apologies to the 45 Gold Coast fans out there, but there’s just no way I can tip you; especially with Jarryd Roughead receiving his token farewell game. No way the Hawks don’t send Roughy out with a win.