The Mounting Yard is back for another blockbuster spring carnival!

We’ve got a nine-race card at Caulfield today, with three group races on the program headlined by Mystic Journey’s return in the PB Lawrence Stakes at Group 2 level. The rail is out ten metres for the entire circuit and we’ll probably get a soft track.

The first is a Benchmark 78 handicap over 1100 meters. I’m not sure I can take the $2.40 currently on offer for Pippie, but she does look like a very good chance. She’s a lightly raced mare who has shown plenty of potential early in her career. She finished a length off Sunlight at Group 3 level a year ago, before resuming up at Doomben winning by three lengths.

From barrier one, Melham should be able to sit on the speed and give her every chance. The other two in the market look like the only dangers. Gododdin won here two starts back after leading all the way, before running under two lengths off Sylvia’s Mother, My Pendant and Ruban Bleu last start, who have all been impressive winners since. She’ll sit on the speed and be there for a long way.

It’s a big watch on Diamond Effort here as well. She won like a jet in her last two starts before going out for a spell. She rises in class today though so it will be the perfect test to see how good she is.

Recommended bet: Leave this one alone. We’ll try and see how the track is playing and there’s no value in the race regardless.

A Benchmark 84 at fillies and mares grade. There are a few chances in this, but I’m prepared to back the favourite in Benitoite for the OTI team. She’s a lightly raced mare by Americain and she’s building a nice record, winning four of her six starts.

She absolutely gapped them at Sandown a few starts back, before having plenty of excuses behind the likes of Sure Knee and Great Duchess at Flemington. She seems to have no issues with Caulfield and she’s just a class above this lot.

The Kiwi in Paint The Town Two shapes as the main danger. She won well off a charmed run two starts back at Sandown, before hitting the line very nicely over the mile at the Valley last start. She’s got great tactical speed so Theo Nugent should be able to get her a nice spot and produce her at the right time.

Toryjoy looks the only other danger. From barrier three she’ll kick up early and lead, and could be hard to run down bringing that Sydney form down here. 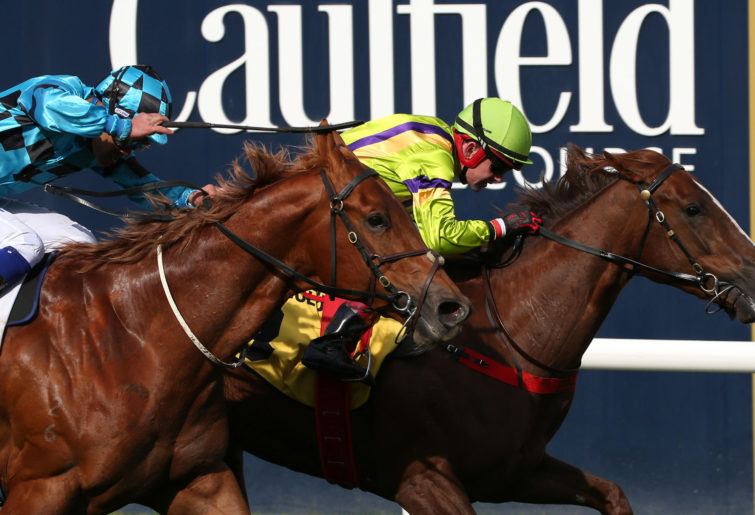 The third race on the card is a handicap over the mile. It’s as even a race as you’ll ever see with a lot of imported runners having their first start in Australia, and I ended up landing on the top weight in Duretto. He’s over the odds here at the $19 quote, having run half a length off Marmelo and Best Solution before coming out for the Caulfield Cup, where he ran a good fourth, again behind Best Solution.

He’s never been unplaced at the mile, and he’s got a great fresh record. He’ll look to sit on the speed in a race without any, and he could take some catching.

New Universe has opened up as the favourite and does look a good chance. He ran a length off Star Of The Seas a few starts back which is a good formline for this, and he won well last start at the Valley. With even luck from the inside gate, he’ll be hard to beat.

Douglas Macarthur is one to keep an eye on. He’s already been backed in by punters, and his overseas form behind Cracksman, Yucatan and the late CliffsofMoher looks good for this type of race.

We’ve got another Benchmark 84 Handicap here in the fourth, and the market tells the story. Age of Chivalry is the short-priced favourite at $2.30 and it’s hard to see him losing. His formlines were strong all through last preparation, when he narrowly missed against Mr Quickie, The Inevitable and No Drama Darci.

He resumed well at the Valley, where he was unlucky not to be in the finish after being held up in the straight. He’s won second up, draws well from barrier seven and probably should be going onto bigger and better things this spring.

Shot of Irish does shape as the only real danger. He finished strongly two starts back at Sandown before beating Smart Ellisim in impressive fashion last start. From barrier one he’ll sit on the speed and give a good sight.

Silent Roar is the best roughie in the race. She can be hard to catch, but her best is absolutely brilliant. They are giving her weight today, too.

The first of the group races comes here in the form of the Vain Stakes, at Group 3 over 1100 metres for the three-year-olds. The market once again tells the story with it being a race in two.

Bivouac looks like the one to beat. The Cummings camp will be praying for more rain as he absolutely thrives in it, but besides that, he’s just a good horse. He beat Cosmic Force on a heavy track in the Lonhro Plate before beating the talented duo of Libertini and Athiri in the Kindergarten Stakes in the autumn. That’s a brilliant formline, and he looks like one that is going to be better as a three-year-old.

Dubious is the obvious danger. He actually beat Bivouac home in the Todman, before going to Queensland and winning the Champagne Classic at Group 2 level. He trialled brilliantly in the lead up to this first-up run and he will make his own luck on the speed.

Race 6
We’ve got a cracking edition of the Quezette Stakes here, a Group 3 over 1100 metres for the three-year-old fillies. I’m going to back two in this race, one of them the $14 chance in Absolute Flirt. She’s got loads of talent, which she showed in Adelaide winning the listed Queen Adelaide Stakes.

She resumed in brilliant fashion at the Valley behind Taarayef, but just had no luck. The way she hit the line in the last 200 metres shows that she is rock hard fit and ready to go for these early spring races. She’s drawn out so she’ll have to go back and around them to win it, but she has the ability to do just that, and is overs in this market.

The other I’ll be backing is the Blue Diamond winner, Lyre. An absolute star, being untrialled is the only query.

She travelled three wide in the Blue Diamond prelude and still won before going to the Blue Diamond and basically coming from last to win. She ran a solid third in the Golden Slipper in conditions she didn’t like and there’s nothing to suggest she won’t be better as a three-year-old. She’ll appreciate a genuine tempo up front and have every chance to overpower them late.

Brooklyn Hustle and Sizzlefly are another two who could deliver on their respective potential.

The Regal Roller Stakes at listed level is the next race, over 1200 metres. Begood Toya Mother is becoming a cult figure in the racing world, and he shapes as a pretty good betting proposition here. He’s won his last five moving through the grades and he hasn’t ever looked like losing.

His latest test was a Benchmark 84 Handicap in which he won by five lengths over city winner Elite Drake. He’s got good tactical speed but from barrier eight, expect Bates to take him to the lead in a race without any pace, and he’ll be very hard to run down if they do in fact give him a cosy lead.

Antah is the forgotten horse and shapes as the main danger. He’s won three from five since coming across from Tasmania, with his last run being his best – a two-length win over Simply Invincible at Bendigo. He’s got a great fresh record, only being unplaced once. He draws well from barrier six and he won’t have any excuses in the run.

Fundamentalist and Long Leaf are probably the class runners in the field, but I don’t want to be launching into them resuming without a trial when they’ve got the big spring races on their minds. 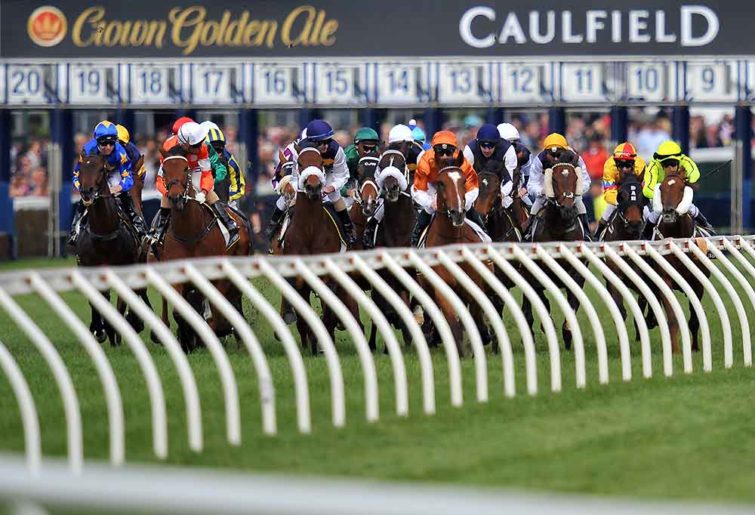 Race 8
The feature of the program comes here in the eighth with the PB Lawrence Stakes at Group 2 level over 1400 meters. The punters have made a big move for the old warhorse Hartnell due to the soft/heavy track, but I’m prepared to stick with the next champion of the turf in Mystic Journey.

If she can get back out towards the $2.30 quote, that’s a gift from the bookmakers. She’s won ten from 13 over the course of her career, including the Australian Guineas win over Hawkshot and the All-Star Mile beating Hartnell and Alizee.

That All-Star Mile win was outstanding, travelling three wide without cover and still beating them by a length. She maps to get a lovely run just off the speed and with even luck I can’t see her losing.

I’m putting a big watch on Neufbosc who is the overseas import. He’s beaten home Ispolini overseas and only marginally lost at Group 1 level in France. Watch how he goes in his first Australian run. 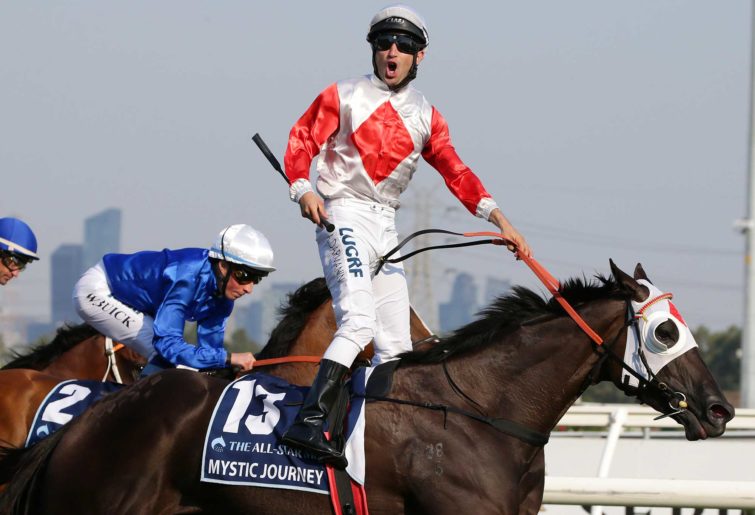 The lucky last on the program is a handicap race for the mares over 1100 metres. It’s an incredibly open affair, with the favourite opening up at $5.50.

I’m prepared to back Causeway Girl. She beat Thine is the Power in the autumn before going up to Sydney and running under two lengths off the likes of Multaja, Classique Legend and Jonker.

Those formlines are brilliant for a race like this. She’s two from two fresh and she maps perfectly from barrier five to get a lovely run just off the speed. She’s worth each-way play at the $7 quote.

Bella Vella is third up now which suggests she is starting to get a lot fitter. She hit form last start winning by three lengths in Adelaide over Irish Mint. She’ll jump and run from barrier four which is suitable for Linda Meech, and Will Clarken doesn’t bring them to Victoria for nothing.

Grey Shadow and Crack The Code are both good horses. With even luck, they can both go close.

Tips for the day