Australia and England’s captains expect Steve Smith will be fit for the third Ashes Test but the concussed superstar’s reality is he will almost certainly remain on the sidelines.

Smith has made history throughout his remarkable run-laden career but on Sunday he did so in a fashion that no player would ever want.

The former skipper was on the wrong end of international cricket’s first concussion substitution, a policy the sport introduced at the start of this Ashes.

Smith woke up with a headache and other concussion symptoms on day five of the drawn second Test at Lord’s, having passed several tests on day four after being hit on the neck by a Jofra Archer bouncer.

Marnus Labuschagne claimed Smith’s place in the XI had played a key role in Australia’s successful stonewall, facing more balls than any of his teammates.

Both camps will now quickly turn their attention to the Test that starts in Leeds on Thursday, with all eyes on Smith.

There is no mandated minimum time on the sidelines beyond the initial 24 hours but given the gradual steps Smith must take it would be staggering if he completes a miraculous recovery in such a short period.

Tim Paine, who was among the players to express skepticism about the new rule prior to the first Test, is nonetheless upbeat.

“I reckon it will be tough to stop Smithy walking out,” Paine said.

“I haven’t been to university, so I’m taking the advice – as Steven is – from our doctors.

“He’ll be reassessed in the next few days, probably constantly I would imagine.

“Cricket Australia have pioneered the concussion sub and it is something they take very seriously, I know our doctor does.”

Smith is also hopeful of being fit for the next Test.

“But it’s certainly up to the medical staff,” Smith added.

“Concussion is an area of concern and I want to be 100 per cent fit.”

“You never want to see anyone get hurt,” Root said.

“I couldn’t believe he came back out but he was desperate to do well for Australia and his teammates.

“We’ll plan for him to be ready to play and keep trying to find ways to get him out.”

Smith had no issues with being withdrawn from the second Test, calling it the “right decision”.

Smith defended coach Justin Langer and team doctor Richard Saw for letting him bat on Saturday after the frightening blow that dredged up memories of Phillip Hughes’ death.

“I passed all the tests and felt fine, felt normal,” Smith said.

“They (Langer and Dr Saw) were both happy and I was comfortable as well.”

March 12, 2006. Johannesburg. Australia post a considerably hefty 4-434 from 50 overs against South Africa – a then-record total that finally surpassed the magical 400 mark – and a nation concedes we might just have enough here. Much like the rest of a confident Australia that Sunday night, I succumbed to the time difference […] 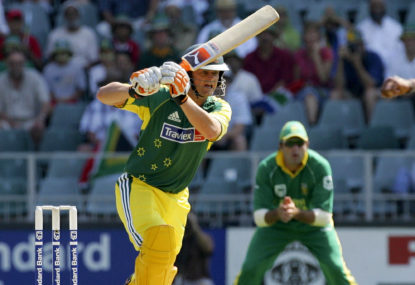