F1 midseason: Who's leading the Formula One class B championship?

The 2019 Formula One season so far has been a wild and unpredictable ride – for those following the midfield anyway.

While F1 has been coming to terms with a near certain sixth Lewis Hamilton championship and Mercedes’s inexorable march to its own sextuple of titles, McLaren has been on a powerful journey back to health from the dark days of its dysfunctional Honda partnership.

But there are no prizes on offer for strong midfield form. The gap between the three front-runners and the rest is so large that – all things being equal – none can hope to finish any higher than seventh in a race Mercedes, Ferrari and Red Bull Racing gets all their cars to the finish.

Formula One mightn’t be – and never should be – a two-category series, but the current and expanding power imbalance has the effect of dividing the sport into two classes.

After awarding class B honours at the end of 2018 – won by Nico Hulkenberg and Renault, and what a world away that seems at this point in 2019 – this season we’re regularly checking in on the sport’s unrecognised class.

The results of the top three teams are deleted, leaving a seven-team, 14-car class B. Points, including for fastest lap, are awarded as per the regulations. You can read the review of the first five rounds of the season here.

McLaren deployed Lando Norris, who dropped to ninth at the start, as a roadblock to build a gap for Sainz to pit into. The strategy worked, and the Spaniard quickly rose to the front to take his first win of 2019.

Magnussen finished ninth to fall one point behind Baku winner and new leader Sergio Perez. Sainz rocketed from sixth to third, four points behind the Mexican.

Canadian Grand Prix
Nico Hulkenberg and Daniel Ricciardo locked out the front row at the power-sensitive Circuit Gilles Villeneuve, but they controversially took the flag in reverse order.

Ricciardo got ahead of Hulkenberg with an early pit stop, and though the German was faster at the end of the race with fresh tyres, Renault ordered him to stay behind the Australian to guarantee a much-needed strong team result.

Lance Stroll scored his first podium of the year at his home race by leaving his sole stop until lap 45 to jump Daniil Kvyat and Carlos Sainz.

A non-score for Magnussen dropped him to fourth behind Ricciardo in the standings, with Sainz moving to second behind Perez.

French Grand Prix
The MCL34’s Spanish GP upgrade was starting to pay off, allowing Sainz to beat Ricciardo to pole by a whopping 0.4 seconds. McLaren was so strong it had to deny bringing a secret upgrade to Le Castellet.

The Spaniard dominated a dull grand prix, and team-mate Norris would’ve completed a one-two had a hydraulic issue not dropped him to fifth in the final laps, though he earned back a place after Ricciardo was penalised for passing off the track.

With Perez sixth, Sainz rocketed into the championship lead with a 16-point advantage. Raikkonen, second on the podium, moved to third in the standings.

Austrian Grand Prix
Magnussen – having fallen from first to seventh in the standings in just three rounds – scored a memorable pole by just 0.027 over Norris, but a gearbox change dropped him to fifth on the grid.

Starting from pole, it was Norris’s turn to dominate from pole, and some superb tyre management on a sweltering day ensured he won easily. Sainz confirmed McLaren’s form by rising from ninth to prevail in a battle for second against Raikkonen.

He grew his points advantage to 21 points, with Kimi usurping Perez to second in the standings.

British Grand Prix
Sainz recorded a memorable, if not fortunate, win at Silverstone, rising into the lead by staying out while his rivals stopped early and then making astute use of a lap-20 safety car to execute a one-stop strategy.

Norris, who had snatched the lead from pole-sitter Ricciardo off the line, opted against stopping during the caution and later vented over team radio that he’d been “dudded” by the strategists on his way to sixth.

Alex Albon’s attempt to run a long one-stop unravelled in the final laps, allowing Raikkonen to score his sixth podium of the year and consolidate second in the standings, now 31 points behind Sainz.

German Grand Prix
Raikkonen took pole at Hockenheim but lost the lead to Hulkenberg after the first pit stops. His race further unravelled when gambled unsuccessfully on an early stop for slicks, allowing Nico to power away – until he crashed on lap 40. 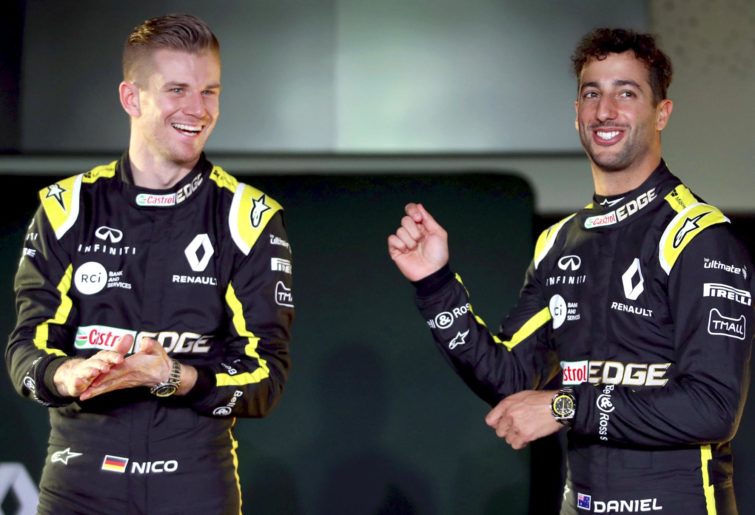 Alex Albon inherited the lead from Sainz, who’d perfectly judged the conditions up to that point, but a late safety car allowed Daniil Kvyat and Lance Stroll to make the inspired call to switch to new slicks rather than intermediate tyres for the restart and finish first and second from the Spaniard, who emerged from the chaos with a 44-point title lead.

Hungarian Grand Prix
McLaren proved its progress with a strong weekend around the slow and twisty Hungaroring, a profile that wouldn’t have suited its car earlier in the season. Norris led Sainz on the front row, but the championship leader jumped his team-mate on the first lap to control the race. Regardless, a perfect race seemed on the cards until a slow pit stop for Norris dropped him to third behind Raikkonen.

After 12 rounds Sainz leads Raikkonen in the F1-B championship standing by a formidable 51 points, with Norris a further 16 points behind.

McLaren holds a commanding 94-point lead in the constructors standings, but the battle for second is tight, with just 17 points separating Toro Rosso, Renault and Racing Point.

Of course, these results are meaningless in the grander scheme of Formula One, but these points tallies illustrate how much richer the sport would be if it were able to create an environment in which the performance chasm separating the front-runners from the rest could be closed.

With poles, podiums and wins spread among a far greater pool of drivers and with even more in regular contention, the pall of negativity that often dogs the sport might finally be broken.

Here’s hoping the technical changes and cost controls due in 2021 can be the much-needed circuit breaker.