How deep do the Lions bat?

The Brisbane Lions’ leap from perennial cellar dweller to flag contender has caught everyone off guard.

For years they have been entirely forgettable – tucked away up north in non-AFL territory. But the hype has built steadily in 2019 and is now an almighty roar. Everybody is talking about Chris Fagan’s boys.

One result is that, alongside the high-profile recruits and A-grade draftees, a handful of long-suffering Lions journeymen have shed their anonymity. Loyal clubmen like Darcy Gardiner and Dan McStay are now household names, recognised as important cogs in a well-oiled machine.

But there are still more Lions who have kept under the radar thanks to the club’s blessed run with injuries.

Brisbane’s healthy list is a popular talking point, often used to suggest that the young group hasn’t been tested and could struggle if their luck runs out and stars are sidelined in September.

But it has also left a backlog of relatively experienced Lions stewing in the reserves. So far, they have been left to take their frustrations out on their NEAFL opponents. Against variable opposition, they’ve been brutal: 17 straight wins with a percentage of 232.7%.

If injuries strike, though, they could be thrown straight into thick of the action in September.

The first opportunity will come this week. Allen Christensen’s hamstring injury opens the door for another small forward. It’ll provide a good test case for how quickly the Lions’ depth players can adapt to the change in pace from the NEAFL to the finals-standard AFL.

Will they be up to scratch? It’s an open question. The club has been frank with its concerns about the standard of the NEAFL. But the Brisbane list has more AFL-grade depth than unacquainted onlookers might realise.

Here are ten players – some forgotten, others unknown, but all very familiar to the Lions faithful – who could be suddenly thrust into the limelight.

Lewis Taylor (112 games, 5 in 2019)
It’s been a tough year for Taylor. The former Rising Star never looked likely to rise to the heights of runner-up Marcus Bontempelli, but he’s earned his spot consistently for most of his career.

This year has been different. It took some until Round 6 to crack the side, with Lincoln McCarthy pinching the spot that had been his.

Once there, he made it count, putting on a career-best performance against the Hawks in Round 11. But a minor injury struck soon after, and his place wasn’t kept warm for him, with Allen Christensen and Zac Bailey keeping him out since.

He’s probably the first in line to reclaim Christensen’s spot after 34 touches and two goals in the NEAFL.

If he misses out, it’ll be because of his tackling: he averages two a game, whereas Christensen has managed more than five in the last month as a pressure forward. But his dash and slick finishing on the run will add plenty. Lions fans will be thrilled to see him get a chance in September after six seasons of faithful service. 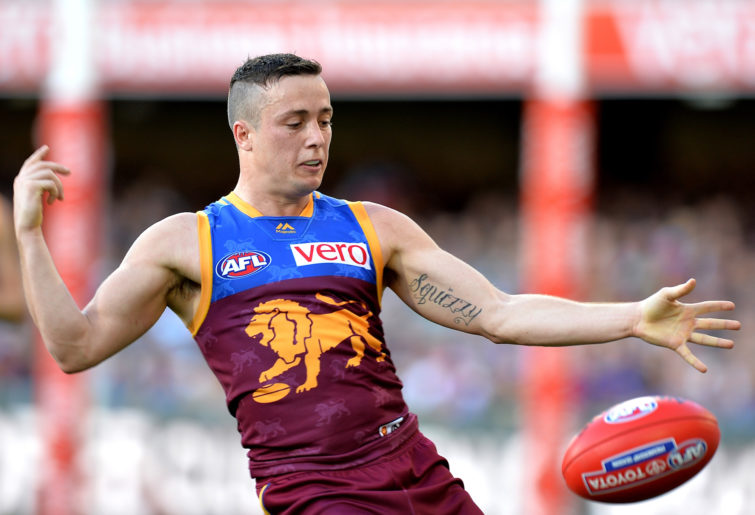 Rhys Mathieson (46 games, 9 in 2019)
Mathieson is a determined character who has a reputation as a very hard worker. He earned a Round 1 berth after a strong pre-season, but like Taylor has struggled to regain his spot after minor injuries.

As a midfielder, he’ll find it even harder than Taylor to return on form alone: Hugh McCluggage and Mitch Robinson are unmovable on the wing, so too Jarrod Berry through the centre. His best route may be as a rival to Taylor and Bailey up forward, a position he’s played before.

His 14 goals in 9 NEAFL games will help his case. Could we see the return of the shotgun?

Tom Cutler (66 games, 3 in 2019)
Cutler may be the unluckiest of the bunch. For the second season in a row, he started on the outer. But unlike 2018, where he earned and then kept his spot, he has managed only three senior appearances.

In part, this was due to an injury from which he’s just recovered. With 21 touches and two goals in the NEAFL last week, he looks ready to go.

Despite his obvious class, he’s still not an automatic selection when fit. He’s helped by his versatility. He could plausibly slot in anywhere on the ground if required.

There have been hints of interest from other clubs, and it’s hard to believe Cutler couldn’t find a regular senior game somewhere in the AFL if he went looking. But in the meantime, he’s a very handy card to have up the sleeve. Strikes as someone who could hit the ground running if needed.

Josh Walker (85 games, 11 in 2019)
The plight of the reinvented Josh Walker has been a favourite topic for Lions fans this year.

Conspiracy theories abound on Lions fan sites about the reasons for Walker’s absence, but the answer may not be all that mysterious: the age-old issue of team balance.

Walker was first replaced by Ryan Lester, a mid-sized defender with a little more versatility who was preferred by Fagan against smaller forward lines. Lester was then replaced by Marcus Adams, whose best-on-ground performance against the Cats proved his worth.

Walker now seems confined to backup key defender, a position which he freely admits is a frustrating one, but which will offer great comfort to Lions supporters. He was most recently used as cover for the suspended Harris Andrews and performed capably. A safe pair of hands.

Ryan Lester (126 games, 9 in 2019)
The 26-year old vice captain is the ultimate journeyman, of similar vintage to plenty of long-forgotten players of a sorry era like Rohan Bewick, Josh Green, Ryan Harwood and Mitch Golby.

But as the others faded, Lester has survived. In Fagan’s first two years, he asserted himself as a regular feature of the senior side. He’s played forward and midfield, but has most recently settled as a solid defender.

In 2019 he’s unquestionably a depth player, and is no superstar, but he has the respect of his peers and has plenty of experience under his belt.

Nick Robertson (72 games, 4 in 2019)
I suspect that at least one person reading this article will have just thought, ‘Oh yeah, Nick Robertson!’

The hard nut played all but one game last year (he was suspended in the one, of course). In 2019, though, the half back has disappeared off the face of the planet. 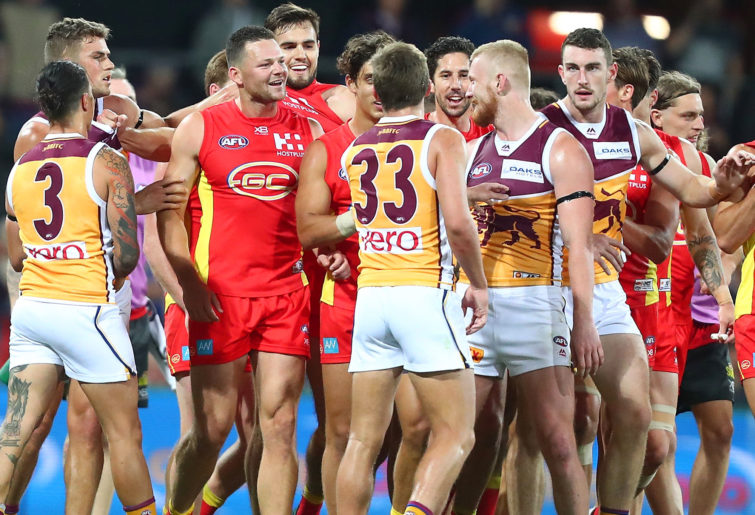 Nick Robertson was a mainstay in 2018, here exchanging pleasantries with then-Suns backman Steven May. (Photo by Chris Hyde/Getty Images)

Most recently, he has been kept out by the discovery of the impressive Noah Answerth. It’s hard to see a road back in for Robertson that doesn’t involve a couple of injuries down back, but showed in 2018 that he was capable enough and can certainly bring the pressure and determination that the Lions have become known for.

Ryan Bastinac (164 games, 3 in 2019)
The former Roo looked done for at the end of last year. After a successful two years at the Lions, Bastinac managed only two senior appearances in 2018 and was demoted to the rookie list.

This year, after a strong season, he earned a spot up forward for the first three weeks, but hasn’t been sighted since. Averaging 29 disposals and 18 goals in the NEAFL this year, so is still in the frame for selection if required, but a fair way back in the queue. Would offer some finals experience, however long ago it was.

Ben Keays (30 games, 2 in 2019)
The small forward has talent, but his predicament is reflected by the fact that he’s so low on this list: there have always been too many names in front of him.

He has managed only four senior appearances in two years and will reach a crossroads soon. His 34 goals from 13 NEAFL games is a great return, and he’s always been able to win the ball in the twos, but has struggled to replicate it in his sporadic call-ups.

Archie Smith (11 games, 2 in 2019)
The Lions’ third ruckman turned heads in the pre-season and sparked talk that he would usurp Stefan Martin. That hasn’t come to pass, but the athletic Smith remains on standby.

A brief experiment of playing him alongside Martin mid-year panned out poorly, with the goal-kicking Oscar McInerney a much better complement.

Six years into his career, Archie is still waiting for his moment to come and has never had an extended berth of AFL footy. A September appearance would be a baptism of fire.

Corey Lyons (0 games)
The only untried name on this list. The younger brother of Jarryd has had strong NEAFL numbers in 2019, averaging 28 disposals and close to a goal a game.

His name has been in the mix recently after a month of particularly enormous stats, but he plays as an inside mid, so his spot is sewn up by Lachie Neale and his older brother.

If he is called up for a September debut, he’d draw comparisons a young Richard Hadley, who played in a premiership in just his fifth game for the Lions in 2003.

The best case scenario for Lions fans, of course, is that none of these players are needed, although if the trend continues it might send some of the talent looking for other offers, as Richmond’s depth players did at the end of last season.

In any event, the Lions have a solid stable of players to draw on if their luck (or, if you like, their excellent injury management program) runs out. Their September campaign will get a boost if one or more of them can take a golden opportunity with both hands.