Boomers vs USA fiasco an insult to Aussie basketball

Anger over the Australia-USA exhibition match debacle ramped up this week as the ACCC became involved in helping frustrated fans get ticket refunds for the historic two-game series.

With multiple Team USA stars pulling out of games, fans have claimed they were misled by false advertising campaigns that included a number of NBA superstars. Even when the actual USA squad was announced it featured stars like James Harden, Anthony Davis and Damian Lillard. And the Aussie team was set to include NBA stars Ben Simmons, Jonah Bolden and Dante Exum. However, just one day out from the first game at Marvel Stadium, all of these players have made themselves unavailable for a variety of reasons.

Who would have thought 12 months ago, when the plan to bring the NBA’s biggest stars to Melbourne was front-page news, that we’d find ourselves in this position? The games still have many seats available and there are sure to be more empty seats if people get their desired refunds.

It’s a sad state of affairs for what was supposed to be a game changer for Australian basketball.

The big question is: is all this hoopla (pun intended) justified? Or is the anger of these so-called fans simply misguided? 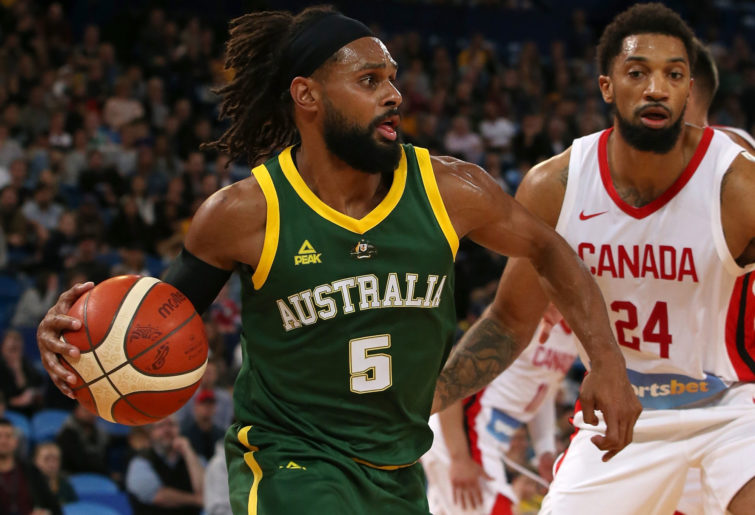 Rather than focus on what’s missing, let’s take a look at what’s still in play. On Thursday night, arguably the best Australian basketball team ever assembled will play in front of the biggest crowd ever seen for a game on these shores. Yes, Simmons is missing. So is Exum, Bolden and Thon Maker. Don’t forget Ryan Broekhoff too. But it is a credit to Aussie hoops that even with those outs the Boomers will still field a team that includes six players with NBA experience, including two with championship rings.

You have Andrew Bogut, the No. 1 draft pick of 2005 and a championship player. You have Matthew Dellavedova, another champion who is notorious for his aggressive and physical style of play. You’ve got Joe Ingles of the Utah Jazz, a player who has excelled in Australia and in Europe and who is now a phenomenon in America known for his sharpshooting.

You’ve got Patty Mills, a veteran point guard of the San Antonio Spurs who continues to contribute to both club and country in so many ways. Throw in Aron Baynes and Mitch Creek and you’ve got six NBA stars – and the word star is completely justified for all these guys. And that’s not to mention the NBL stars like Chris Goulding and European star Jock Landale. This is no amateur team.

On the other side you’ve got what many might call a second-string USA team. But that team includes Donovan Mitchell, Kemba Walker and Jayson Tatum as well as Jaylen Brown, Marcus Smart and Khris Middleton. Yes, the US won’t field its best team, but the team they will field is still filled with NBA talent. It’s a younger team, but many of these guys are the future of the NBA.

As for the game itself, the same crew that convert football stadiums for NCAA final four games will take the reigns at Marvel. Massive multimedia screens and an NBA-worthy court setup will make this an experience like nothing seen in Australia. And everything else aside, these are the final hit=outs for two teams considered medal hopes for the upcoming World Cup. Who wouldn’t want to be a part of this?

The problem we have here is that Aussie fans are still too focused on the NBA. The National Basketball Association is arguably the biggest, most profitable and most popular sporting product in the world – in fact it is probably one of the biggest entertainment products full stop. There is no other basketball competition in the world that comes close to the NBA. The flow-on effect for Australia is that most Australian fans are more interested in the NBA than our local competition.

The truth of the matter is that many Aussie hoop ‘fans’ wouldn’t be able to tell you who plays for the Opals, who our best local players are or even who won the NBL championship last year (shock, horror!). The sad reality is that when these exhibition games were announced, many fans chose to view it as an NBA extravaganza rather than a historic, home-soil match for our Boomers ahead of an extremely important World Cup campaign. And now that Little Johnny won’t get to see LeBron James or Steph Curry play, what’s the point of going?

It’s even sadder given Australian basketball is thriving at the moment. You might even say it’s the best it’s ever been. NBA representation aside, the local game is going gangbusters. The NBL has reached new heights with international acclaim, fantastic media coverage, a new free-to-air deal with SBS, an extremely competitive competition players across the world are looking at and huge signings, including two of the biggest NBA prospects in America

We’ve just crowned champions in the inaugural NBL1, a new feeder series that gives the best men and women ballers in the country the opportunity to showcase their skills. On the international stage we’ve seen recent medals for the Opals, under-19 girls, under-17 girls, men’s and women’s 3×3 teams and the Rollers wheelchair team. Participation and interest in basketball is at an all-time high across the country.

It’s sad to think that even with all this positivity fans are still not interested enough in Aussie hoops to want to sit courtside and cheer on our lads on one of the biggest stages possible. It is an insult to Australian basketball that people are turning their back on these games. Yes, ticket prices are expensive and, yes, we were misguided by advertising, but we’re still getting a pretty bloody good deal. We should be throwing our full support behind it regardless of how many NBA players show up.

We should be showing the world how much we care about the sport. Instead, I fear that there will be a lot of empty seats at Marvel Stadium on Thursday and Saturday, and while it will still be a spectacle and a fitting send-off for both teams as they head to China, it could have been so much more. A sad state of affairs indeed.