How significant is the Perth Scorchers' exodus?

Adam Voges went from captaining the Perth Scorchers to coaching them in the space of a season.

It was an odd – and perhaps an absent-minded – move by the Scorchers hierarchy. There’s no doubting Voges’ pedigree. He was an elite cricketer and leader. And he’s been part of the furniture in Western Australian cricket for more than 15 years.

But coaching? Voges had no experience as a coach – let alone as a senior coach – prior to his appointment as Justin Langer’s replacement.

So, what have the Scorchers lost?

Batting strength and depth, in a nutshell.

Shaun Marsh will pull on the Melbourne Renegades colours after the east coast club offered him a three-year contract. The financial security proved too enticing for the 36-year-old, who was offered a single-year deal by his home club.

Hilton Cartwright is shipping off to the Melbourne Stars. Although not a prolific scorer, he was a stable presence in the Scorchers’ middle order. Also, he offered a great pair of hands, handy medium-pacers and the ability to lead.

Cartwright feels his development has stunted in Perth and he’s keen to link up with current and ex-WA players.

“I’ve heard great things about the club’s environment from past and present players, including Michael Beer and Marcus Stoinis, and already know a few of the other guys through various teams I’ve been involved with,” Cartwright said.

The Zimbabwean-born Cartwright will be joined at the Stars by a known talent in Nathan Coulter-Nile, as well unknown entities in Lance Morris and Clint Hinchliffe.

The dynamic Coulter-Nile adds firepower with both bat – he scored 92 in the recent World Cup against the West Indies – and ball.

Morris has been dubbed the Wild Thing, such are his similarities in pace and bowling style to the ex-South Australian speedster Shaun Tait. And Hinchliffe is a left-arm leg-spinning all-rounder who debuted for the Scorchers last season.

These are the outs for the Perth-based franchise. What about the ins? 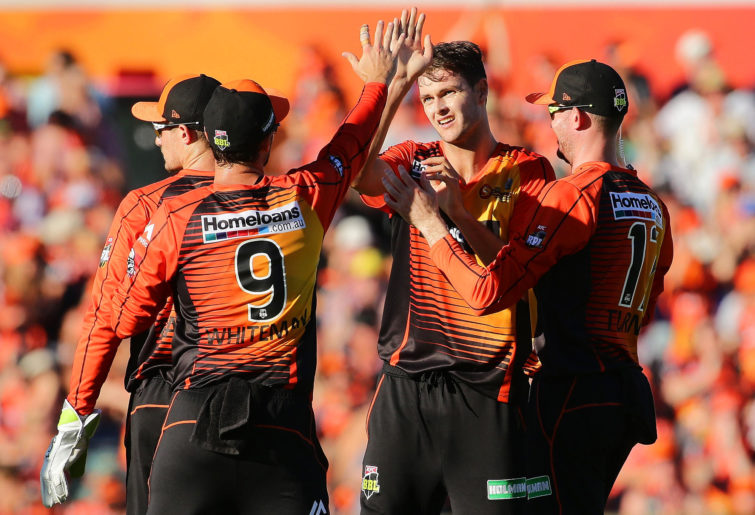 Cameron White was discussed as a good fit. But the Adelaide Strikers have since got their hands on him.

The only other link is South African captain Faf du Plessis.

Does Voges hope to rely (again) on homegrown talent to bring success back to the Perth Scorchers, in spite of the recent coup?

This could prove a risky ploy. The Scorchers’ batting depth is dangerously thin and will rely heavily on captain Mitchell Marsh and his deputy Ashton Turner.

Are the Scorchers finding it difficult to recruit?

Cartwright mentioned that he’s looking forward to the environment at the Melbourne Stars.

What about the environment in Perth? Is it stale? Or lacking in expertise?

The Scorchers will be hoping for a change in fortunes this season after collecting their first wooden spoon last season.

Silverware is what the fans in the West have grown used to, not woodwork. 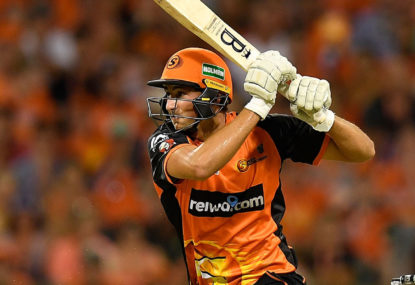 Perth Scorchers captain Mitch Marsh cracked six sixes to help lead his side to victory in their BBL clash with the Melbourne Renegades.