Why Ross Lyon would be a perfect Giant

It’s always difficult to speculate on where a recently sacked coach may end up, if anywhere at all, particularly when you think it could be at a club that already has a coach – but Ross Lyon would be a perfect fit for GWS.

The biggest concern for Greater Western Sydney is their ability to tough out a game and, for that matter, a season. However, while the Giants have had some really solid wins this season – beating Geelong at GMHBA Stadium is no walk in the park – too many times this season they’ve been beaten in matches they just shouldn’t lose.

Think of the following losses: Fremantle at home, Hawthorn twice and Essendon at Marvel Stadium after they held a good lead late in the game. Add to that the manner in which they’ve lost a couple of those games – conceding the last nine goals of the match halfway through the third quarter against the Bulldogs and kicking their lowest-ever score against the Hawks in the snow – and some worrying trends are starting to emerge.

Leon Cameron has done a good job, but the reality is that he hasn’t been able to take a list that most feel should have won a premiership by now or at the very least made the grand final to the ultimate prize. I understand that injuries have contributed, but there’s still enough talent there to overcome those injuries.

GWS seem to have the necessary skill and talent on their list, but the mental toughness is clearly missing.

That’s where Ross Lyon comes into consideration. Lyon is renowned for taking well-established teams to the top of the table. He did it with a ready-made list at St Kilda and also took Fremantle to the minor premiership.

I acknowledge he hasn’t yet tasted the ultimate success, but neither St Kilda nor Fremantle had the depth of talent that GWS have at their disposal, which could be enough for Lyon to finally take that next step. There’s no doubt Ross would also instil the hardness within the group it’s sorely lacking at present.

GWS need to make a hard call to avoid potentially going down as the greatest underachievers of the century by missing out on a premiership. They’re not going to get back the draft concessions they had earlier in the side’s history, so it’s time for them to be bold and make a tough call on the coach.

GWS coach Leon Cameron says Lachie Ash and others are in the mix for a call-up should Adam Kennedy be an enforced omission come Round 2 of the AFL season. 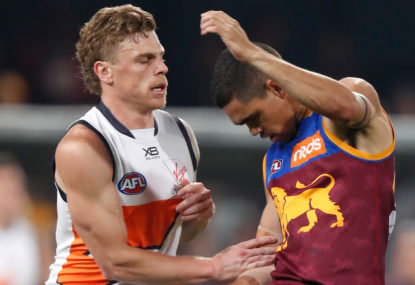