Ross Lyon's Fremantle were headed in the right direction

It’s nearly impossible to forget that frantic evening in September 2011.

No, I’m not talking about that phenomenal preliminary final between Collingwood and Hawthorn, or grand final eve.

On a Thursday night in the middle of September, news broke of Lyon’s shock departure from St Kilda, who was on his way to replace a sacked Mark Harvey as coach of Fremantle.

The news was confirmed the following day by the club, who unveiled the new senior coach they hoped would lead them out of the darkness into the light.

Lyon, who had coached St Kilda to three successive grand finals (one in 2009 and two in 2010 when the draw was replayed), was announced as the coach of Fremantle just four days after his Saints finished sixth in 2011 and lost the elimination final to Sydney at Etihad Stadium.

It was bold, it was brave.

And it was brilliant.

In Lyon’s second season, he led Fremantle to their first ever grand final appearance.

Two years later, the club finished one game clear on top of the AFL ladder.

And four years after that, ahead of the final home-and-away game of the season, Ross Lyon was sacked.

The Dockers’ fourth season without a finals appearance spelt the end for Lyon, even with a year to run on his contract.

President Dale Alcock told 3AW’s Sunday Sport that the club couldn’t see Lyon at the club beyond 2020 and therefore decided it was best to cut ties now.

“Imagine if we had gone forward with a coach who we weren’t extending beyond 2020, the noise and the distraction would have been too much,” he said. 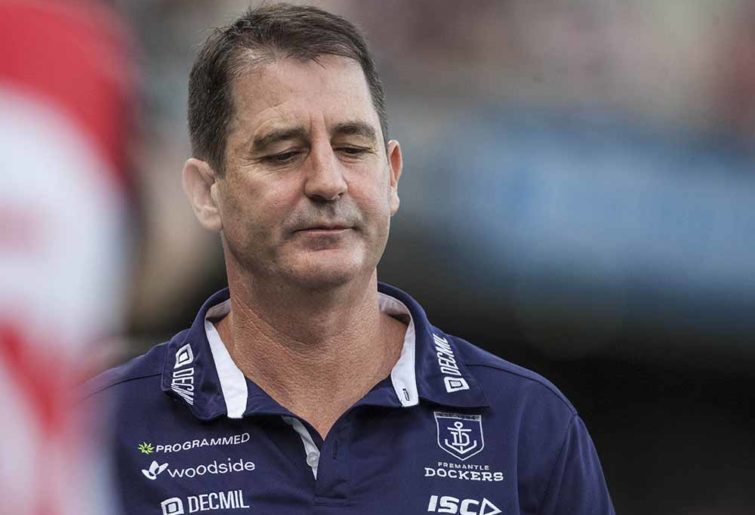 What stings the most for the departed Fremantle coach is that most wouldn’t have predicted this outcome ten weeks ago.

At the end of Round 13, the Dockers were sitting in sixth spot on the ladder, fresh off a scintillating month of football.

They had praise flying in from all angles, none higher than from AFL legend Jonathan Brown.

“I was really impressed seeing (Freo) live and first-hand,” he told On The Couch at the time.

“They’ve had good away wins against GWS and Collingwood at the MCG. They’re the best last-quarter team in the competition, they’ve got a world-class midfield, I think Jesse Hogan’s getting back into form.

“They’re heading in the right direction.”

Sadly for Ross Lyon and his men, that’s where the feel-good story ended.

Winning just two of their next nine games, Lyon was shown the door.

So what went wrong?

It wasn’t a sudden stop of goals because Ross Lyon’s sides aren’t known for high scores.

They’re simply not getting their hands on the football enough and not working hard enough.

At the end of the home-and-away season, Freo sit 17th in marks and tackles per game, as well as 16th in points per game and efficiency inside 50.

You also don’t know which Fremantle outfit is going to turn up from week to week.

The Dockers defeated five of the top eight in 2019.

They knocked off Geelong, Brisbane and the Bulldogs in Perth, plus GWS in Sydney and Collingwood at the MCG.

But in the same season, fell to four of the bottom five sides, with their only victory by one point against Sydney.

There are clearly elements of Fremantle’s game plan that need re-working.

But their depth (or lack thereof) requires the most attention.

We’ve all heard about Collingwood and Essendon’s injury woes, but it seems that a many turned a blind eye to players dropping like flies at Freo .

You may not know Alex Pearce, but you should.

The key defender looked a lock for All Australian selection midway through the season before suffering a season-ending ankle injury. He was joined on the sidelines by fellow big men Rory Lobb, Matt Taberner, Brennan Cox and Sean Darcy at different times throughout the year.

Luke Ryan, who has enjoyed a break out season the Dockers, missed the final four games of the season with a hamstring injury.

Star recruit Jesse Hogan also failed to fire in his first year for Fremantle with a foot injury restricting him to just 12 games for the year.

And then there’s Harley Bennell, who was restricted to another game-less season due to injury.

Fremantle confirmed in mid-July that they would part ways with the former No.2 draft pick at the end of the season.

Who stepped up in the absence of these players?

And that’s where it all came tumbling down.

The injuries came and then the losses followed.

Freo’s fast start of 2019 was completely unwound by the end of the season.

And that meant the end of Ross Lyon.

It makes you wonder what could’ve been for Fremantle in 2019 if they’d had a healthy list.

As displayed earlier in the season, a healthy Dockers team is clearly on the path to becoming a strong side once again.

But now former coach Ross Lyon and former CEO Steve Rosich won’t be leading them on that search for success.

And ironically, the sacking of Mark Harvey followed a similar path in 2011.

Following a finals berth in 2010, his Dockers were 9-6 and in the eight before losing their final seven games of the season by an average margin of 50 points and finishing the home-and-away season in 11th spot on the ladder.

But what happens on field is just one part of the story, and the only part we may ever hear.

I’m not sure if sacking Ross Lyon was the right move. One more year seemed logical to me.

The team was clearly heading in the right direction and 2020 could’ve been the chance for Lyon and his men – without all the injuries – to once again be part of something special.

Despite the good signs, the club’s ladder position suggests a side that has had another ordinary year and in Fremantle’s eyes now appeared to be the right time to let Lyon go.

It’s a debate that will be revisited in time.

Where are Fremantle going and who is leading the charge?

Well, they’ve got a pretty handy leader in Peter Bell, whether he remains in his current role or steps up to the CEO post over the summer.

On field, Nat Fyfe is as committed as ever to lead his team-mates for another year.

They’d better strap themselves in for 2020 and beyond.