The Newcastle Knights fans deserved better. The 46-4 capitulation to the Wests Tigers effectively ended the Knights’ season while leaving fans questioning as to whether they want this team to represent them again next year.

As an unbiased observer, I watched this game fully expecting a nail biter between two teams desperate to make the top eight for the first time in years. I had leaned towards the Knights with the loss of Robbie Farah maybe proving the difference.

One team showed up with that desperation. For the other team, the first mistake they made on Saturday afternoon was probably getting off the team bus.

We shouldn’t forget that the Tigers were impressive. With a 90 per cent completion rate, Benji Marshall continued his form of recent weeks initially at hooker. On the edges, Marshall and Luke Brooks were creating havoc while Josh Reynolds – sporting possibly the worst hair cut of all time – provided some spark that the Knights were missing.

The Tigers were good, sure – but just how good were they? We probably won’t get a read on this until the last round against the Sharks.

We definitely got a read on the Newcastle Knights though. Losing on Saturday night was bad enough, but the manner of the defeat was the biggest concern.

As we’ve no doubt heard plenty of times, rugby league is about the effort plays, the one-per-cent-ers. These things don’t show up in the match stats so the closest proxies we have are possibly the post contact metres and the missed and ineffective tackle counts.

To be fair to the Knights, we are looking at these stats per set of six rather than the totality of the game where the Tigers held 60 per cent of the ball.

In isolation, none of these factors necessarily lose you a game by that type of margin. However, with those stats across the board – coupled with the fact that covering defence went missing in a number of tries – the effort has got to be questioned.

The lack of effort wasn’t across the whole team. Danny Levi topped the game tackle count with 51 metres, Shaun Kenny-Dowall ran for 158 metres on the night and David Klemmer worked hard in the middle. Mason Lino organised a greater portion of play than what would be considered normal.

For whatever reason, Mitchell Pearce and Kalyn Ponga have lost their best form since Origin. Pearce couldn’t force one drop out on Saturday night while the Tigers got five.

After Kalyn Ponga threw an intercept in the first half which led to a Tigers try, he was barely sighted. I’m not blaming any individual in the team solely for the loss but Knights fans could have expected more of the marquee players.

Mathematically, the Knights are still a chance of playing finals footy. Realistically, they are gone for the year. It was a roller coaster. High hopes at the start followed by a series of losses.

When people starting calling for Nathan Brown’s head, the team started playing to their potential. After Origin, it started to fall apart. This time around, the team couldn’t save Nathan Brown.

The timing of the announcement of Brown’s departure – and the media circus that followed – has proven to be poor.

However, the players had the chance to make their own statement on Saturday night. They didn’t, which speaks volumes in itself.

With all the reports going around town, Tyson Frizell could shift to the Newcastle Knights by 2021. Should it actually go down, he’d be a top asset for Newcastle. With the season less than a month away, we Knights fans can rule out any chance of him joining our team beforehand and we could see […]

The NSW halfback stood no chance. 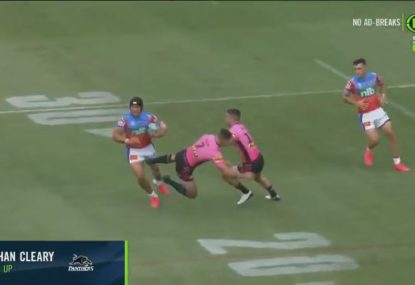