The end of an era for the Sydney Swans, but the future is bright

Those who were lucky enough to be at the Sydney Cricket Ground last Saturday afternoon would have witnessed not only the end of a successful era, but also possibly the beginning of another one.

In perfect weather conditions, over 33,000 fans packed the Moore Park venue to see the Sydney Swans do battle against St Kilda in the annual Pride Game, with added significance to it.

Not only was it the farewell game for ex co-captains Jarrad McVeigh and Kieren Jack, it was also Lance Franklin’s 300th AFL game, as well as Aliir Aliir’s 50th.

Franklin and McVeigh both trained vigorously in their bids to feature in the Swans’ final match of the season, both players having been plagued by injuries which restricted them to just 15 games between them in 2019.

Further, it also marked the return of Dan Hannebery to the SCG after he was traded to St Kilda at the end of last season.

It ended up being the Swans’ third most-attended home match of the season, with only the matches against last year’s grand finalists, Collingwood and the West Coast Eagles, attracting more people.

Given the enormity of each occasion, you could sense that the Swans – who have constantly fielded the youngest team in the competition – were always going to lift, and that’s exactly what they did as they ended their season with a 45-point win over the Saints.

After the Swans kicked six goals in the first quarter, they were held goalless in the second before they put on the afterburners after half-time, kicking 11 goals to the Saints’ three to end an otherwise disappointing season on a high.

While Buddy Franklin stole the show with four majors, bringing his career tally to 944, undoubtedly the two highlights of the match came in the final quarter when first McVeigh, and then Jack, each kicked a goal to send the crowd into raptures.

The crowd stand up and cheer after Kieren Jack kicks a goal for the @sydneyswans in the final quarter. Quite uplifting #AFLSwansSaints #AFL #PrideGame #Buddy300 pic.twitter.com/rmsHY08Nrg

They also became the first side in history to reach the finals after starting the 2017 season with six straight losses, and are the most recent non-Victorian side to defeat Richmond, the eventual premiers that year, in Victoria.

McVeigh, Smith and Franklin, as well as Nick Smith and Heath Grundy – who both announced their retirements earlier in the season – were all chaired off after the match to the tune of the Foo Fighters’ song ‘My Hero’.

Over 1000 games of experience have now been lost and it will be up to the club’s young brigade, as well as Sam Reid, Josh Kennedy and Luke Parker – the only remnants of the 2012 flag – to usher in a new era for the club.

It is the first time in a quarter of a century that the Swans have landed in the bottom four, finishing in 15th position with eight wins, 14 losses and a percentage of 97.7, having conceded 40 points more than they scored across 22 matches.

This is the best percentage by any side that has finished in the bottom four in AFL history – in fact, the Swans lost only two matches by over 30 points – against the GWS Giants (41 points) and Port Adelaide (47 points) in Rounds 6 and 21 respectively.

The 8-14 win-loss record was the same as it was in 2009, which until this year was the most recent time the Swans had failed to reach the finals. That year, they finished 12th with a percentage of 93.14, but were right in the finals race until the penultimate round.

By comparison, Essendon – who won four more matches than the Swans – finished eighth on the ladder with a percentage of 95.4 (the lowest by any of this year’s eight finalists) and scored four points less and conceded 38 more points than the Swans across 22 matches.

It is a sign that even though their fall down the ladder this season was inevitable, the Swans were never going to lose matches in such a bad manner, like Melbourne did too many times this season.

In fact, the Swans led for at least one minute or so in each of their 22 matches this year, and in two matches, never trailed at any stage – against Hawthorn and Melbourne in Rounds 14 and 22 respectively.

As mentioned above, going into the 2020 season, only Josh Kennedy, Luke Parker and Sam Reid will remain from the side that defeated Hawthorn by ten points to win the club’s fifth VFL/AFL flag, but second since relocating from South Melbourne in 1982.

Buddy Franklin will also enter the third-last year of the controversial nine-year contract he signed with the Swans at the end of the 2013 season, and, should he remain fit, will very likely reach the 1000-goal milestone late in the season.

This will very likely result in the AFL’s first pitch invasion since 2008, when Buddy kicked his 100th goal in what was just his fourth AFL season.

In recent times, pitch invasions have become so rare that they now only occur when a player kicks his 100th goal in a regular season, or his 1000th career goal, something we haven’t seen since Gary Ablett Sr did so in 1996.

In the long term, Franklin is likely to finish his career around the 350-game mark, which would see him become the first man to ever play 350 AFL games and kick over 1000 goals.

As far as the rest of the team is concerned, the development of younger players such as Nick Blakey, James Rowbottom and James Bell are expected to continue – in particular Blakey, who will continue to be groomed as their next main target up forward once Buddy retires.

2017 debutants Ollie Florent and Will Hayward both brought up their 50th games during the season, while their ruck stocks should be bolstered by the expected returns of Sam Naismith and Callum Sinclair from injury-interrupted 2019 seasons.

In addition to Jarrad McVeigh, Kieren Jack, Nick Smith and Heath Grundy all retiring, Tom Papley and Zak Jones are also likely to depart the club, attracting the interest of Carlton and St Kilda respectively.

At present, the Swans have not yet attracted the attention of any prospective players wanting to leave other clubs, though they were once linked to Essendon’s Joe Daniher, who remains committed to the Bombers.

But if this season taught us anything, it’s proof that the Swans’ future is indeed bright, and that their absence from September might not be a long one after all.

In fact, the last time the club suffered from such an exodus was not very long ago, when Adam Goodes and Rhyce Shaw retired at the end of the 2015 season, while Lewis Jetta and Craig Bird were traded to the West Coast Eagles and Essendon respectively.

Many experts had tipped them to slide down the ladder in 2016, but they surprised many – including themselves – by again finishing on top of the ladder with a percentage of 151.2 and the best defence in the competition, reaching yet another grand final.

Defenders Aliir Aliir and Callum Mills, plus forwards Tom Papley and George Hewett, all debuted that season, with Mills winning the Rising Star Award, while Callum Sinclair arrived in the Harbour City after featuring in the West Coast Eagles side that lost to Hawthorn in the 2015 grand final. 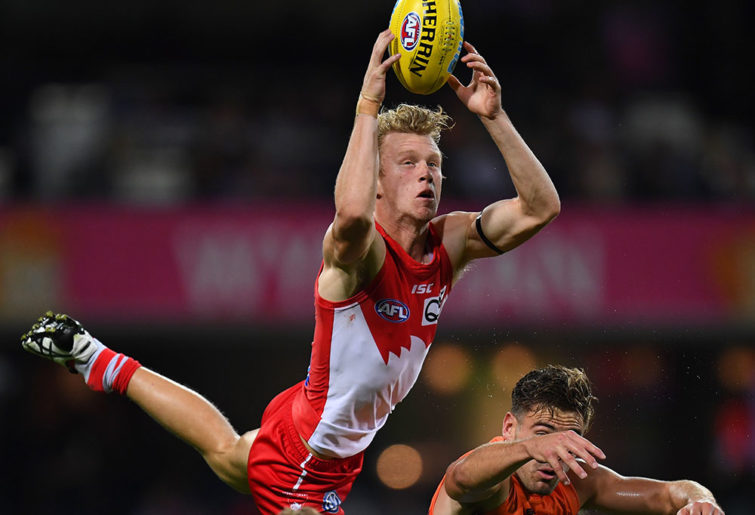 They almost certainly could have won the 2016 premiership had it not been for some dubious umpiring decisions against the Western Bulldogs, who were riding a wave of momentum after winning three consecutive sudden death finals to take their place in the big dance.

In the years since, the Swans’ on-field performance has regressed, falling in the second week of the finals in 2017, then bowing out in the first week in 2018 before missing the finals altogether this year – marking just the fourth time since 1995 that they will watch September football from the sidelines.

But you just get the feeling that it won’t be long before this club is back contending for another premiership.

And if you want to believe in omens, then you better save the champagne for 2022.

Bolton, Goodes, O’Keefe and Roberts-Thomson would later feature in the 2012 premiership win, by which point John Longmire became the coach after taking over from Roos at the end of the 2010 season.

Thus, if the Swans do take out the 2022 flag, then they can look back at the season just passed – in particular the final two matches which they won by a combined margin of 98 points having defeated Melbourne by 53 points in Round 22 – as where the first seeds were planted.

It would also provide Lance Franklin (35 at the end of the 2022 season), and possibly Josh Kennedy (34), the fairytale end to their careers.

But first thing’s first – with their season already over, the Sydney Swans players can enjoy a rare September holiday before returning for an extended pre-season in November, during which they will launch their assault on a possible return to finals action in 2020 and beyond.

In the meantime, the rest of New South Wales will probably want to jump on the GWS Giants bandwagon, with that club the only hope the state has of premiership glory this year.

The Giants, who will be competing in their fourth consecutive finals series, will have to win four consecutive sudden death finals if they are to go all the way, starting with next Saturday’s clash against the Western Bulldogs, in a rematch of the classic 2016 preliminary final.