Who's set for All Australian honours?

With the All Australian squad of 40 announced on Monday and the final 22 players to be named in the team of the year on Wednesday night, there have been somewhere between 60 and 60,000 ‘expert’ teams named in the hours since.

I’ve decided to throw in my two cents – emphasis on the quotation marks – with my team of the year on behalf of the Roar crew.

So without further ado, here is a collection of names that you’ll almost certainly disagree with.

Back pocket
Shannon Hurn
Hurn has become just about the surest thing in footy. The West Coast skipper does his job defensively while cutting teams up with his surgical kicking skills. Is top-ten for average intercept possessions (7.7).

Full back
Harris Andrews
The Brisbane big man is the fulcrum of the Lions’ vastly improved defence and should be one of the first players picked in any team of the year. Top-ten in averages for both intercept possessions and intercept marks.

Back pocket
Dylan Grimes
Has stepped up as required since the Tigers lost superstar Alex Rance in Round 1. Capable on players big and small, Grimes is just about the perfect third-tall defender. Of the 21 players to have defended at least 60 one-on-ones this season, Grimes’ loss rate of 18.7 per cent is better than all but three of them.

Halfback
James Sicily
Injury probably cost him his first All Australian selection in 2018 but has picked up where he left off as one of the game’s best and most complete defenders and deserves to be recognised as such. Had more intercept possessions than anyone and lost just 18 per cent of his defensive one-on-one contests. 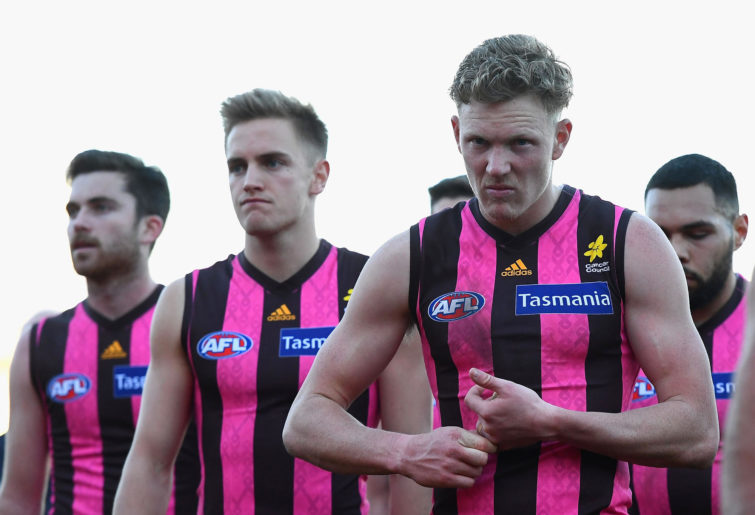 Centre halfback
Jeremy McGovern
It’s easy to take McGovern for granted and look for a shiny new name to put in the side, but West Coast’s best player deserves the gig. Was second in the league for average intercept possessions and average intercept marks (behind Phil Davis on both).

Halfback
Daniel Rich
The Brisbane veteran – it’s hard to believe Rich has already notched 205 games – has had his best season and is my final pick in the back six. Second in the league for metres gained and averaged a very respectable 6.3 intercept possessions a game. I’m not sure how he missed the squad of 40, but he somehow wasn’t the most egregious omission.

Wing
Brad Hill
The most stunning snub in the initial 40 players was the Fremantle dasher. Hill will be one of the league’s most sought-after players this season and with good reason. Averaged career highs in disposals (25.1), kicks (17.8) and rebound-50s (2.7) and was seventh in the league for metres gained. His endurance is second to none.

Centre
Lachie Neale
Hill’s former teammate took to his new team like a duck to water. Could well win the Brownlow and simply must be in the side.

Lachie Neale has been one of – if not the very – best AFL recruits this season. (Chris Hyde/Getty Images)

Wing
Hugh McCluggage
Neale’s former teammate on one wing and his current teammate gets my nod on the other. McCluggage became a star in his third season, averaging 22.6 disposals, 14 kicks, 4.3 inside-50s and 3.3 clearances while booting 22 goals in 21 games.

Half forward
Patrick Dangerfield
The only question with Dangerfield is what position to put him in. Should be a lock for his seventh All Australian selection and isn’t out of place on a half-forward flank after booting 25 goals. Could well win his second Brownlow in a few weeks’ time. 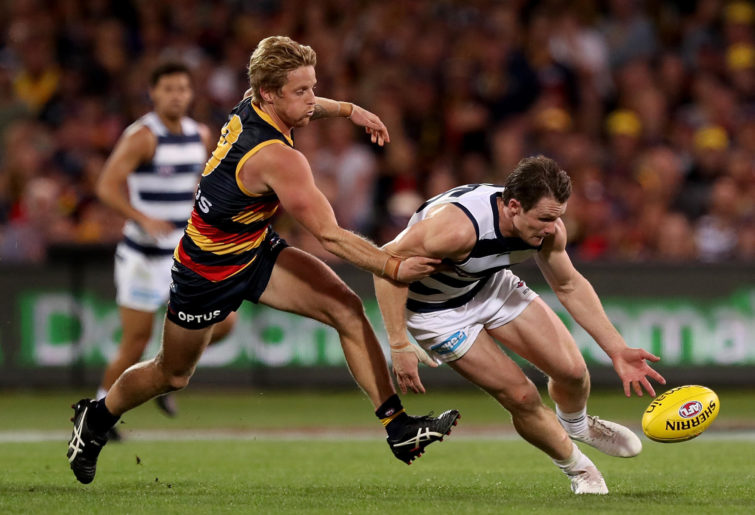 Centre half-forward
Jack Darling
Once maligned, the 27-year-old Eagle is now in his prime and one of footy’s best key forwards – and has surpassed Josh Kennedy. Like Sicily, injury probably cost him a blazer in 2018, but he deserves his first selection after a 54-goal season.

Dustin Martin
We sometimes hold the superstars to unfair standards. Dusty had a slow start to the season by his lofty standards but was by no means poor, and he finished the year looking very much like the destructive force we’ve come in recent seasons to know and love/fear.

Feels like a bit of a cheat to slot him in the front six but the folks at Champion Data list him as a mid-forward so in a season without many standout forwards, that’s good enough for me.

Forward pocket
Michael Walters
Walters did more work up the field this season without losing anything in terms of goal scoring. Averaged career-highs in disposals (21.8), kicks (13.8), clearances (3.8), tackles (3.5) and contested possessions (9.6) while still slotting 40 goals. Pick him.

Forward pocket
Charlie Cameron
The smaller Cameron has become the best small forward in footy. He has to be picked.

Ruck
Brodie Grundy
Hasn’t taken a backward step after a dominant 2018 and deserves the ruck position in the team of the year after being the year’s best.

Follower
Nat Fyfe
It’s hard to believe the Fremantle superstar last made the All Australian team in 2015. He’s not quite the overwhelming force that he was back in his Brownlow Medal-winning year, but he’s close and is a no-brainer selection.

Follower
Marcus Bontempelli
Another of the Brownlow Medal fancies, Bontempelli has become just about the complete midfielder – gotta sort out that goalkicking though, Bont – and is a certain selection in the 22 after arguably his finest season yet. 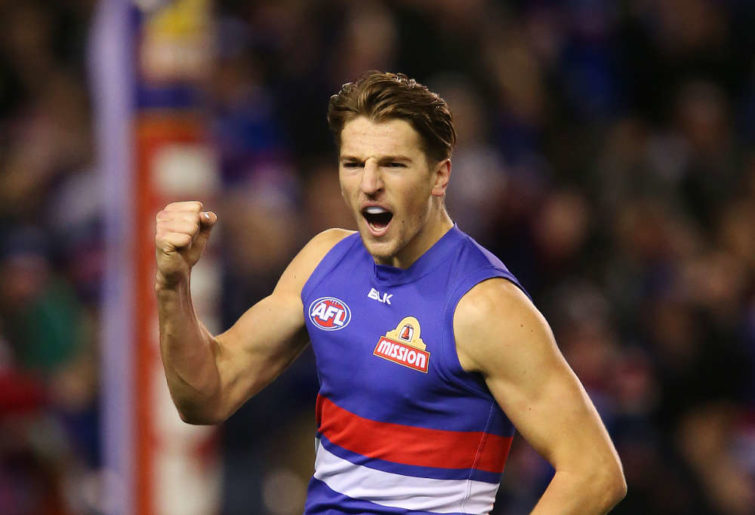 Interchange
Patrick Cripps
The only question is whether the Carlton colossus is named in the starting 18 or on the bench. I can’t put him ahead of the other three mids, but it’s splitting hairs. Cripps must be selected.

Tim Kelly
There are five onballers who demand selection in this year’s team, and Kelly is the fifth of them. Like Cripps, the only question is whether he makes the first 18.

Travis Boak
Port’s former skipper’s 13th season was his best yet, and until a month ago, was a lock in my team of the year. His form has dropped off slightly in the final month, but not enough for me to leave him out. Averaged career highs in disposals (30.3), kicks (14.6), clearances (6.95) and contested possessions (14.7).

Max Gawn
It’s been a disaster of a season for Melbourne, but Gawn couldn’t have done any more. He was one of the season’s best players and deserves to be rewarded as such. There are some players who are unlucky to miss out, but none of them demand being picked ahead of the Melbourne big man. 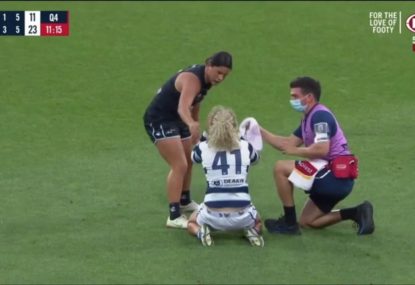 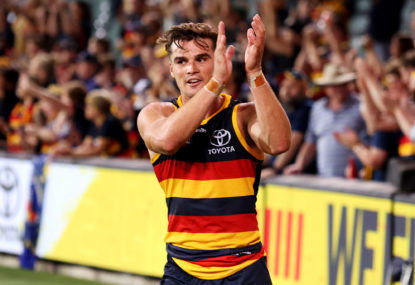 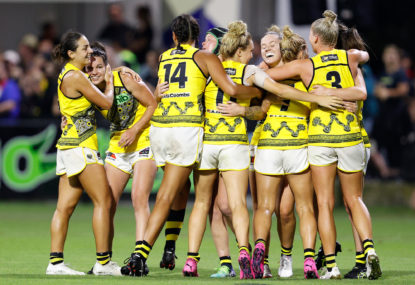