Perception and reality: The Wallabies and All Blacks scrum from Perth to Eden Park

One full week before the game was ever played, the war of words started. The build-up to the key 2015 Rugby World Cup encounter between Australia and England was, unusually, dominated by talk about the scrum.

“So much of the scrum is based on perception. The English work on having a reputation for legal scrummaging while doing the opposite. If I was Michael Cheika, I would be asking the referee if that [Marler angling in] is allowed,” Dwyer told the Telegraph.

“I originally attributed it to Mako Vunipola,” he later went onto say. “Then I saw Joe Marler starting and they were both doing exactly the same thing. It must be by design.

“Neither of them scrummage square. Both of them angle in. Invariably that is at 45 degrees, but sometimes that ends up being at 90 degrees. Then when I see the opposition being penalised, I find that extremely hard to understand.

“It is the easiest thing in the world to do because the loosehead can go where he wants. It is a simple thing to do: you start off at an angle and gradually increase your angle…

“I expect it to be a big contest and it is an important part of the game as we all know. It just depends on how well Romain Poite, a noted scrum referee, officiates it.”

South African referee Jonathan Kaplan chimed in on Twitter in support: “I’d like to see if the England pack is square on the loosehead side … just the once.”

Dwyer’s comments were designed to help Australia in an area where they had suffered against England one year before at Twickenham, conceding a pushover try in the course of a 27-16 defeat.

And it worked. England lost all of their predicted ascendancy at scrum time, and the picture of Poite swinging his arm over from one side to the other – originally awarding a second-half penalty to Marler but then flipping the decision around 180 degrees on the advice of his assistant – was somehow symbolic of the phoney war which had preceded it in the media.

The fact that his club coach at Harlequins, John Kingston (a loosehead himself by trade), had alluded to Marler’s well-deserved reputation as one of the most honest loosehead props in Europe, mattered not one jot. The impact of the smear campaign lasted well beyond the World Cup and took a long time to erase completely.

The biomechanical good sense spoken by Kingston in 2015 also has great relevance to the performance of another Joe, All Blacks loosehead Joe Moody, over the past two weeks:

“[Marler] has an incredibly long bind, unlike a lot of props who tend to bind under the arm or on the arm. Joe binds long. In that way he’s probably unique for a loosehead in international rugby…”

“In an attempt to keep straight you’ll actually end up coming out slightly. It becomes almost like ‘V’ where you find yourself turning out because they’re not staying straight.”

It is instructive to examine the thematic scrums from the two games between the Wallabies and the All Blacks at Perth and Eden Park in the context of Dwyer and Kingston’s comments.

First, let’s find a foundation for the debate in the raw stats:

There were no turnovers in the scrum outside of the penalties awarded to each side. Only one penalty went against the feeding team (against the Wallabies at Eden Park).

The perception of Australian scrum dominance in the first game is not supported by the raw data. The Wallabies won one penalty at Perth for a Joe Moody collapse, but New Zealand worked usable ball off the base of all four of the second-half scrums where they packed down with seven forwards. They had no problems on their own ball at all.

The perception of dominance was based on one goalline scrum where Moody might have been penalised, but play was allowed to continue by referee Jerome Garces:

For now, let’s content ourselves with observing the Marler-like length of Moody’s left-arm bind – all the way on to Allan Alaalatoa’s shorts – and put the collapse down to Sam Cane’s sudden release from his position behind the All Blacks loosehead, causing the left side of the set-piece to destabilise: 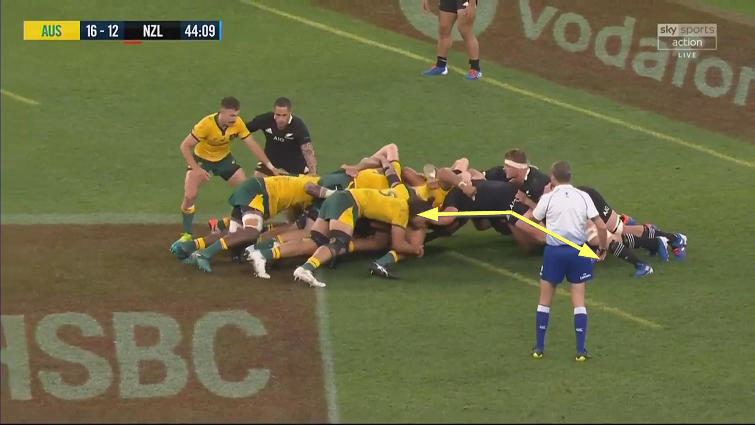 Cane is pressing down on Moody’s left hip, and with his outside leg so far back there is only one place Moody can go when the pressure comes on.

The resemblance between the two Joes was reinforced at the very first scrum from the return game at Eden Park – with the benefit of the overhead spider-cam:

The Wallaby scrum retreats about five metres in the course of the set-piece, but it does not go back in a straight line. The axis of the New Zealand drive is on a diagonal from left to right, and towards their powerful new tighthead Nepo Laulala: As the ball rolls into the tunnel, Laulala takes a couple of sidesteps out to his right to unsettle Scott Sio, and hooker Dane Coles pushes up underneath Tolu Latu’s right shoulder. In order to stay in contact with his hooker, Alaalatoa turns in and Moody follows him across the tunnel, to the point where he is scrumming at 90 degrees towards the far touchline.

It is the essence of Bob Dwyer’s complaint about Joe Marler’s technique: “You start at an angle and gradually increase your angle.”

At the same time, the other part of Dwyer’s statement – that the loosehead “can go where he wants” – is clearly not the case. Moody has to follow Alaalatoa across the tunnel in order to remain attached to the scrum, and that leads us into the meat of Kingston’s comment that “in an attempt to keep straight you’ll actually end up coming out slightly. It becomes almost like “V” where you find yourself turning out because they’re not staying straight.”

The scrum is by nature an asymmetrical puzzle, so nearly all movement will occur on an angle to some degree. The All Blacks solution to that puzzle enabled them to push an Australian scrum with one extra body at the end of the first half:

The area of domination is on the Australian left side, and in the middle. Laulala is able to step out on Sio and drive him backwards without the support of a flanker on his side, while replacement hooker Codie Taylor has popped Latu and shifted gaps – by the end of the scrum, he is in between Latu and Sio, rather than in his starting niche between Latu and Alaalatoa.

The sufferings of Latu, in particular, became acute at the scrum which Australia lost on their own feed, despite enjoying the same one-man advantage:

Note the length of Moody’s initial bind, all the way on to Alaalatoa’s right hip. The reality of the scrum is again best revealed from above:

The real problem here is Tolu Latu, who cannot survive the pincer pressure exerted by Laulala and Taylor, however acutely his props change their angles in order to protect him: 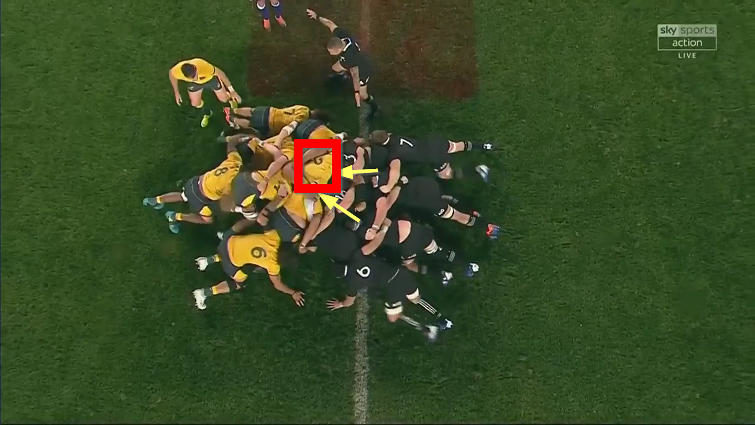 Moody is following the lead of the two men alongside him, and simply tucking his head into the only space available to him.

Why does he aim for the long bind which John Kingston admired so much in Marler? Because it straightens his back and brings his head in under the tighthead’s ribcage quite naturally, and grants him greater control of the opponent’s packing angle.

If he can get a solid bind on his opponent’s hip or shorts, he is more than halfway to winning his personal battle:

Taniela Tupou has already learnt a thing or two in his short Test career! As soon as he feels Moody’s left hand moving on to his right hip, he snaps off the binding arm and the scrum breaks up fractiously.

Summary
The tale of the two Joes contains some important lessons for officials at the impending World Cup in Japan.

Are they going to surrender to the propaganda war as in 2015, and let their own perceptions dominate the outcomes from set-piece? Will they penalise all attempts to move the scrum on an angle and neuter it as a contest? Or will there be an acceptance that asymmetrical packing tends to produce non-linear results?

Getting the answers to these questions wrong can have a significant impact on the results of critical games, and even on the trajectory of individual careers. Just ask Joe Marler. 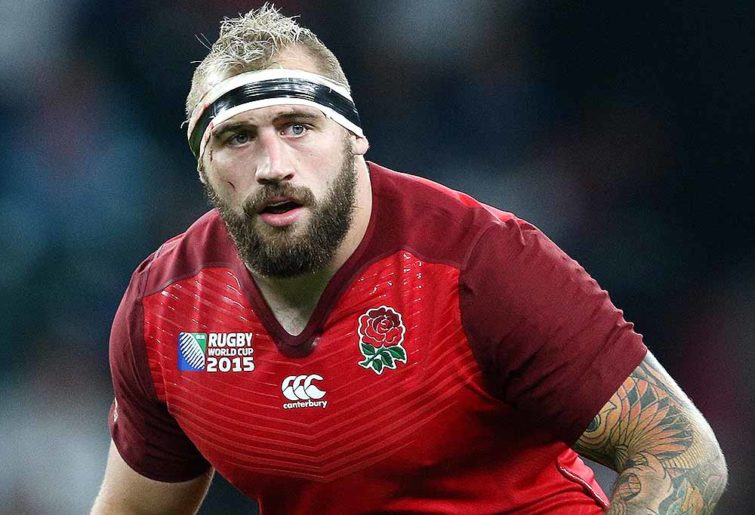 In the meantime, both Australia and New Zealand will have to revisit the composition of their most effective front rows. Australia have an issue with Tolu Latu in between Scott Sio and Allan Alaalatoa, and maybe also with Sio on the left side of that unit.

The All Blacks looked more purposeful at scrum time with Codie Taylor instead of Dane Coles, and Nepo Laulala instead of Owen Franks, so there are key choices to be made there too.

The power and enjoyment of the scrum is one area which distinguishes rugby from its sister code league, and that point of difference needs to be celebrated in Japan. Not by referees blowing the whistle or guessing at outcomes, but by letting the likes of the two Joes play. Don’t play games, just play ball.