Another team finished for the 2019 season is Carlton.

Considered a ‘basket case’ halfway through the season, the club was eventually able to show the form that the immensely talented group of players at the club were capable of and supporters and football lovers in general were left excited at the possibilities for 2020.

At the heart of the elite (as he has been all throughout his career) was Kade Simpson who finished the year as the fourth-greatest Blues game player of all time. During the season he passed team of the century fullback Stephen Silvangi and by season’s end was within three games of equalling number three on the list, John Nicholls.

Although only playing 18 games for the season – only the second time in the past 14 years that he has played less than 20 games – Simpson became part of the back end recovery and the number of wins achieved by this really meant that Simpson avoided – at least temporarily – the least flattering statistic in the AFL: the number of losses played.

Currently held by Fitzroy legend Kevin Murray, who played for 20 years between 1955 and 1974, the record stands at 208 – three more than Simpson has played in. There appears little doubt that – unless he decides to not play on – Simpson will claim this record during the 2020 season, but it is an exciting time to be at Carlton and there is a chance that he may not hold the record for long.

Melbourne’s terrible 2019 season, which saw the Demons fall from fourth position in 2018 to 17th position in 2019 also meant that skipper Nathan Jones played in 17 losses for the year and now sits on 195 – only ten behind Simpson and 13 behind Murray.

Also among Carlton’s elite top 100 game players is Marc Murphy. Murphy also sits inside the Blues’ top-ten game players at equal eighth with another former great full back, Geoff Southby. One more stellar year from Murphy could see him rise to as high as seventh on the list.

The only two other top 100 game players on Carlton’s list are Matthew Kreuzer (equal 42nd with Bruce Comben and Bret Thorton) and Ed Curnow (equal 61st with Adrian Gallagher). Only one new top 100 game player inductee is possible next year: Levi Casboult.

Goalkicking wise, after what seemed forever, Matthew Kruezer kicked the goal that raised the top 100 goalkickers bar to 91 (the highest at any AFL club) and caused the demise of Chris Yarran and Chris Judd. He went on to finish the season in 95th place, joining Marc Murphy (31st), Kade Simpson (57th) and Levi Casboult (63rd) on the list.

While Dow brothers Paddy and Thomson would much rather be at their AFL clubs playing footy, the reality is they’re at home on their Swan Hill farm in isolation. 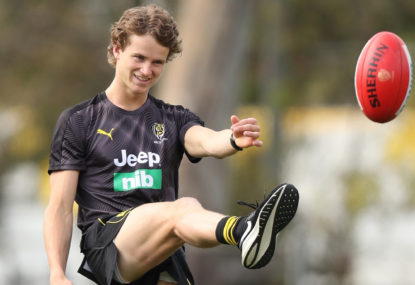