Spot of bother for the Roar

It was heartbreak for Robbie Fowler’s Brisbane Roar as they crashed out of the FFA Cup round of 16 to a dogged Central Coast Mariners side after penalty kicks.

Both Tom Aldred and Roy O’Donovan saw their efforts saved by Mariners keeper Mark Birighitti as the Central Coast prevailed 4-2 after extra time.

Unchanged from their success in the previous round versus Sydney, Brisbane made a bright start at Redcliffe’s Dolphin Oval cheered on by over 6,000 supporters. Three corners were forced in the first six minutes as the Roar looked to assert their dominance.

But it was the Mariners who stunned the home crowd by taking the lead on 21 minutes. Matt Simon got the wrong side of Scott Neville who clumsily fouled the veteran forward. Referee Alex King had no hesitation in pointing to the spot, and Simon dusted himself down and converted the spot kick emphatically, sending keeper Jamie Young the wrong way.

The Roar responded well to the setback though and on 28 minutes a cross from O’Donovan found Stefan Mauk unmarked but at full stretch the midfielder shot over.

Another chance came and went for Brisbane on 36 minutes as Brad Inman was put through one on one but he fired straight at Birighitti, as the Roar went in a goal down at the break.

Whatever Fowler did say at half time clearly had the desired effect, as with the second half only a minute old, Jake McGing fed Inman who turned well and found the bottom corner of the net from 14 yards with his well-placed shot going in via the post. 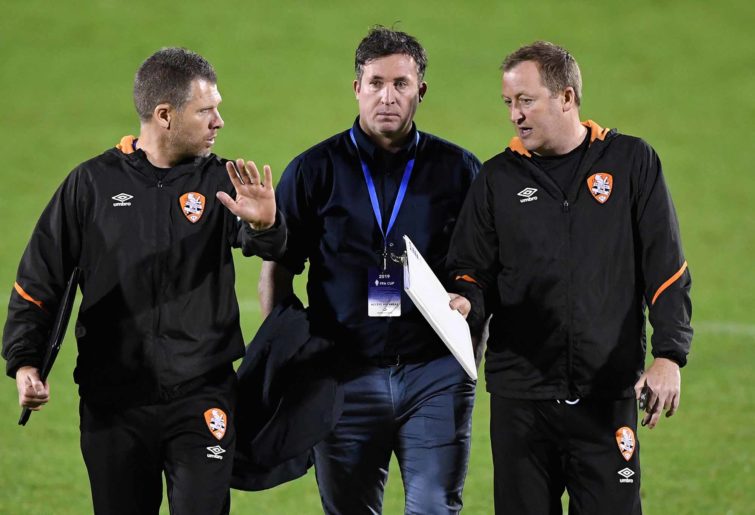 On the hour mark O’Donovan wasted a golden chance to put the Roar into the lead after being played in by substitute Aiden O’Neill.

The striker blazed over with the goal at his mercy.

On 72 minutes Central Coast came within a whisker of a second goal as former Roar man Tommy Oar picked up the ball 25 yards out and his fierce drive rebounded off the crossbar with Young well beaten.

But with five minutes to go, Mariners must have thought they had won it when a cross found Matt Simon at the far post and his knockdown enabled sub Samuel Silveria to fire home from close range. Silveria showed some nice touches when entering the fray and received praise from Mariners boss Alen Stajcic, who said the youngsters trickery and pace had changed the game in their favour.

Just as many thought the late goal spelt curtains for the Roar, Brisbane won a penalty on 87 minutes, O’Donovan was bundled over by Milan Duric, and the Irish marksman opened his account for his new club, slotting home confidently.

Extra time saw both teams go close without a winner, O’Neill coming the closest for the Roar in the second half of extra time, seeing his shot strike the post after more good work by McGing.

Last season’s A League saw these two sides propping up the table, but there was plenty of encouraging signs for fans of both teams, which was echoed by Stajcic in his post-match comments.

‘Both teams showed they have improved from last year, there was a lot of character and resilience on show and it showed tonight the competition should be a lot tighter this season’.

For a clearly disappointed Fowler, he praised both the support from the Brisbane crowd and the efforts of his new look side.

‘I thought maybe tonight we lacked some luck in the final third, but I can’t fault the boys, I thought they were tremendous’.

The Roar now turn their attentions to the Pre Season Surf City Cup when they take on Perth Glory on Friday at the Gold Coast, while Central Coast can look forward to a last eight FFA Cup trip to NPL side Hume City who won their round of 16 clash with Adelaide Olympic 3-1.

Weirdest celebration of the season?