Suck it up princess: Addin Fonua-Blake did nothing wrong

Listen up snowflakes: it’s a tough old world out there. While lots of you are outraged about Addin Fonua-Blake’s post-match taunting of the Raiders crowd, you really just need to eat some concrete and harden up.

Fonua-Blake’s actions might not have been classy, but he had earned the right to perform them.

Rugby league is a tough sport. Unsurprisingly, it is played by tough people.

As a result, classy behaviour from players should be understood as being the exception and not the rule.

The Sea Eagles’ win last Sunday in Canberra was as hard-fought as they come. It propelled the Brookvale boys into the top four and truly marked them as a contender – a concept that 12 months ago seemed ludicrous.

Furthermore, on Sunday they had to play the whole second half with only 15 players after Joel Thompson broke his forearm and Moses Suli injured his ankle.

Ricky Stuart’s boys were playing to win too. They made four line breaks to their opponents’ one, and 250 more running metres. In the last ten minutes, the home side had 75 per cent of the ball.

But Manly held on. Their defence was stellar. The match was semi-final intensity. The performance was worthy of a top-four spot.

During the post-siren jubilation, Fonua-Blake taunted the Canberra crowd. It was clearly instinctive. It wasn’t an offensive gesture or a Nazi salute. In spite of the outcry about his actions, the prop did nothing that bad.

Like myself, many of that Canberra crowd would have been gifted an idyllic, cloistered, utopic – if also bloody cold – upbringing. The city may well be the safest capital city in the world.

Hell, there’d be supporters here – myself included – raised on the virtues of high morals and proper behaviour conveyed to us through such things as Rudyard Kipling’s If (“If you can wait and not be tired by waiting, Or being lied about, don’t deal in lies, Or being hated, don’t give way to hating, And yet don’t look too good, nor talk too wise.”) and Grantland Rice’s Alumnus Football (“For when the One Great Scorer comes to mark against your name, He writes – not that you won or lost – but how you played the Game.”).

Fonua-Blake, on the other hand, was born in Sydney’s west and, by his own account, had a tough upbringing that included seeing his mother physically assaulted by her partner, as well as regularly engaging in violence himself.

“It is a hard childhood but then again, a lot of kids grew up through it, too,” he said.

“Growing up I fought a lot at school, out of school… wherever. I was bigger than most of the others so when I was a kid I fought older teenagers, when I was a teenager I took on men.” 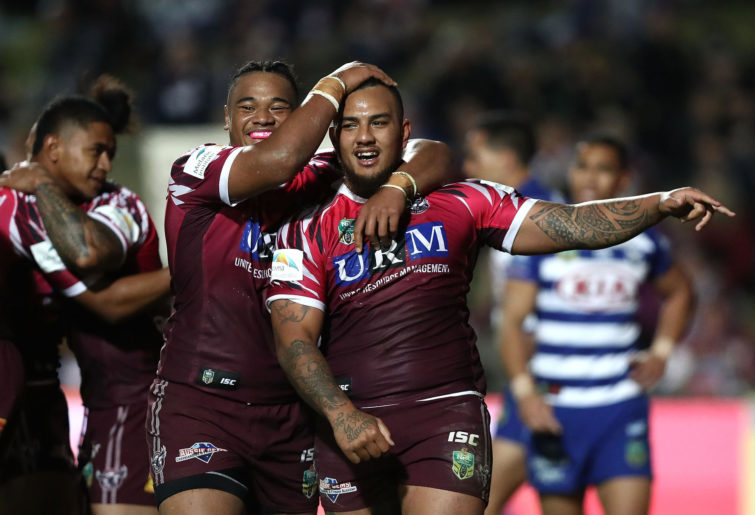 In 2016 he had his contract terminated by the Dragons after pleading guilty to charges of domestic assault against his partner.

He subsequently reconciled with his partner and undertook intensive counselling.

“All I’m worried about is being the best father, the best role model and best family man possible. I can’t change the past – I wish I could – but I can fix the future.”

In 2017 he joined the Sea Eagles and he has been a revelation. While Martin Taupau is lauded as one of the best props going around, Fonua-Blake’s star has been rising fast.

He is one of the many reasons that Des Hasler’s side are genuine contenders after finishing second-last in 2018.

But don’t imagine him to be a shining beacon of integrity and good choices. That is a ridiculous expectation.

He is going to have rough edges. He might not always show a lot of class.

I don’t know about you, but at 23 I was a complete idiot. It took me quite a while to grow up. Now 50, I still find myself in situations where I’m looking around to find a more qualified adult than myself who can do far better adulting than me, or trying desperately to keep my juvenile instincts in check.

In reality, giving the crowd a bit of a send-off is tame stuff.

While I and most of my green-clad comrades certainly didn’t enjoy it, it was far from a crime. We just need to suck it up.

We also need to suck up the refereeing issues from the match. Yes – absolutely – Jack Gosiewski was offside when he intercepted the Josh Hodgson pass that led to Reuben Garrick’s try. Why Ash Klein did not get the offside checked, nor Steve Chiddy elect to do it automatically, is a total mystery.

But we’ve repeatedly seen the bizarre and unbalanced emanate from those in charge of the NRL and running the games – don’t get me started on Michael Buettner and the match review committee. This was just another to add to the list.

But here is the thing, in the 18th minute – just before Jarrod Croker’s first try – the Raiders were given six again. The incident happened directly in front of me, I had my glasses on, and I can assure you that it should have been Manly’s ball.

The incidents balanced out.

In the end, the difference between the sides was the brain fart by Joey Leilua that gave the Sea Eagles the vital extra two points.

Without those two points, Manly would have only been two points ahead in those final ten minutes. Canberra would have been able to at least draw level through a penalty goal, and then probably expose the 12-man Sea Eagles in extra time.

Fonua-Blake did nothing wrong, the referees’ errors balanced out, and the Raiders are themselves to blame for the loss.

The fans just need to suck it up.