DWZ scored a try but consistency says it wasn't one

My mate Henry backed Kyle Feldt for first try-scorer in the Cowboys-Bulldogs fixture last night at 1300 Smiles, and was despondent after Dallin Watene-Zelezniak touched down adjacent the posts in the 15th minute.

A union man, my man Henry doesn’t watch a lot of rugby league, and thus would’ve torn up his ticket had he not placed the bet through electronic agency.

And yet, as we watched the first and subsequent replays of the play, I said to him: “Hold that electronic betting stub, my man, for this could very well be no try.

“Watch this: they’ll be finding a knock-on, or something, within that slow motion conflagration of man and other man.

“They’ll rock and roll through it, back and forth, looking at the little displacement of ball and hands.

“For my money, Henry my man, this will be no try.”

Sure enough, the bunkermen decided the ball had come loose, or something, in DWZ’s kung-fu grip, and that was presumably enough to constitute a knock-on, for in the game of rugby league, you could knock the ball on by throwing it backwards over your head. 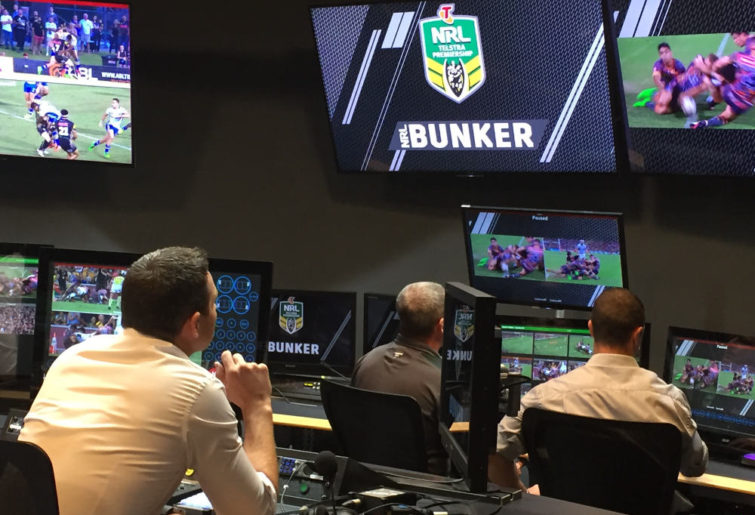 And Henry looked at me and said: “You know your Mungo my man. Respect.”

And then he celebrated when Feldt (whom I tipped him onto) scored the game’s first try 34 long minutes later.

And so Henry was happy, and DWZ backers were sad, though if they’re league people, they would not be surprised.

It’s what everyone has bayed for, screamed for. And the referees have delivered.

This is what consistency looks like. What do you reckon?

Consistency means there are no knock-backs. Consistency means any slight hint of ambiguity around possession of the ball in a tackle is deemed a knock-on, changeover, and so on, particularly when it comes to the exciting part of the game, the scoring of tries.

And if you think DWZ scored a try last night, then examine your feelings, Luke, and ask yourself: Did you demand consistency?

“When did he lose the ball?” asked Dean Pay in the post-match post-mortem and there were no answers because journalists only do the asking.

And it was rhetorical question anyway. What Pay meant was: “He didn’t lose the ball, it wasn’t a knock-on, the try was scored, it’s how things are, but I’m not too bummed, my job is safe, we’ve won six of the last nine and could’ve beaten the Cows in their last game at 1300 Smiles with a bit of luck or if rugby league wasn’t so enamoured with consistency that it’s willing to get many things wrong as long as it’s not accused of the mortal sin of inconsistency.”

Or words to that effect.

Now, DWZ did not knock the ball on. It went from two hands to one hand, and back to two, and it was controlled well enough that he could place the ball bang down onto the ground.

There was no separation of ball and hand. It looked like he had last control – but had he? If it was not a knock-on, then… how can he have lost control?

It seems to come down to one’s interpretation of possession. If DWZ lost possession then surely he’s knocked the ball on.

But he didn’t knock it on. Watch it. The ball doesn’t separate from his hand. It squirts out, sort of, but there’s no separation. Thus how can he have knocked the ball on?

Nene Macdonald scored one against the Roosters in the Anzac Day match last year – I told a tale of it – and everyone howled that the ball had come loose in his grip as he flew through the air, and thus it was not a try.

But it was a try. The ball did not physically separate from his fingers. He may not have had absolute control of the footy. But so what? He didn’t knock it on. He regained control and slammed the footy on the paint, and the bunkermen flashed it up “TRY”.

And everyone lost their minds.

On the rival broadcaster and outward through the greater TV-watching public of Australia, the consensus was the same: that was not a try.

Even refs boss Bernard Sutton – the go-to man before Graham Annesley got the gig of political spinner and explainer-in-chief, and looking forward to his take on this one Monday – said it was not a try.

But it was a try.

Macdonald lost control but regained it in his fingertips and that was enough to force downward pressure on the footy on the paint. It didn’t touch anyone. It didn’t leave his grasp, tenuous as it appeared.

And everyone howled about consistency.

And today DWZ can score a try in which there was no separation of ball from hand, and thus no knock-on, and here we are, again, pissing into the wind.

And Big Gra will come out Monday or whenever and tell us the bunker boys got it bang on, or not, maybe because… Big Gra says so.

“Funny game, rugby league,” said my man Henry the Rah-Rah, and I could offer no argument.