Halep, Kvitova crash out while Osaka and Nadal advance at Flushing Meadows

Reigning Wimbledon champion Simona Halep has become the highest profile casualty at this year’s US Open, with her chances of regaining the world number one ranking going up in smoke.

The fourth-seeded Romanian crashed out of the tournament in stunning fashion, losing to local favourite Taylor Townsend in a thrilling third-set tiebreak, thus continuing her recent poor record at Flushing Meadows.

The 27-year-old started well enough, taking the first set 6-2, making it seven straight sets won against the American after she’d beaten her in three previous meetings, including in Miami earlier this year.

However, Townsend would take the second set 6-3 and held three match points in the tenth game of the decider before Halep won three straight games to force a tiebreak, which the 23-year-old would win by seven points to four.

Not only has Halep’s chances of reclaiming top spot in the rankings disappeared, the result also marked her third consecutive early exit from the US Open after she had lost in the first round in the past two years.

Halep wasn’t the only top ten player to depart on Day 4 – dual Wimbledon champion Petra Kvitova and ninth seed Aryna Sabalenka were also knocked out after suffering straight-set defeats to Andrea Petkovic and Yulia Putintseva in their respective matches.

Their losses leaves defending champion Naomi Osaka, seventh seed Kiki Bertens and recent Rogers Cup champion Bianca Andreescu as the highest seeds remaining in the top half of the draw.

Osaka kept her title defence alive, defeating Magda Linette, whom she also defeated in the first round of the Australian Open in January, in straight sets.

She lined up what promises to be a massive clash against American teenage sensation Cori Gauff, who withstood the challenge of Timea Babos to reach the third round in what is her first appearance in the main draw at Flushing Meadows.

13th seed Belinda Bencic, a quarter-finalist in 2014, also advanced to the third round by defeating Alize Cornet in three sets.

Andreescu, meantime, defeated lucky loser, and former Wimbledon semi-finalist Kirsten Flipkens, to set up a third round clash against 19th seed Caroline Wozniacki, who came from a set down to defeat Australian Open semi-finalist Danielle Collins in her second round match.

In the men’s draw, second seed Rafael Nadal did not have to sweat to reach the third round, receiving a free pass into the third round after his opponent, Australian wildcard Thanasi Kokkinakis, withdrew due to a shoulder injury.

The Spaniard will face Korea’s Hyeon Chung in the last 32, after the 2018 Australian Open semi-finalist came from two sets down, and saved a match point in the final set, to oust 32nd seed Fernando Verdasco in a thrilling five-setter.

In winning, Chung denied the tournament what would’ve been a fascinating clash between the two Spanish warriors, nine years after the pair met in the quarter-finals of the 2010 US Open and over a decade since their classic semi-final duel at the 2009 Australian Open.

2014 champion Marin Cilic came from a set down to defeat Germany’s Cedric-Marcel Steve in four sets to line up a third round clash with local favourite John Isner, who defeated another German in Jan-Lennard Struff in straight sets. 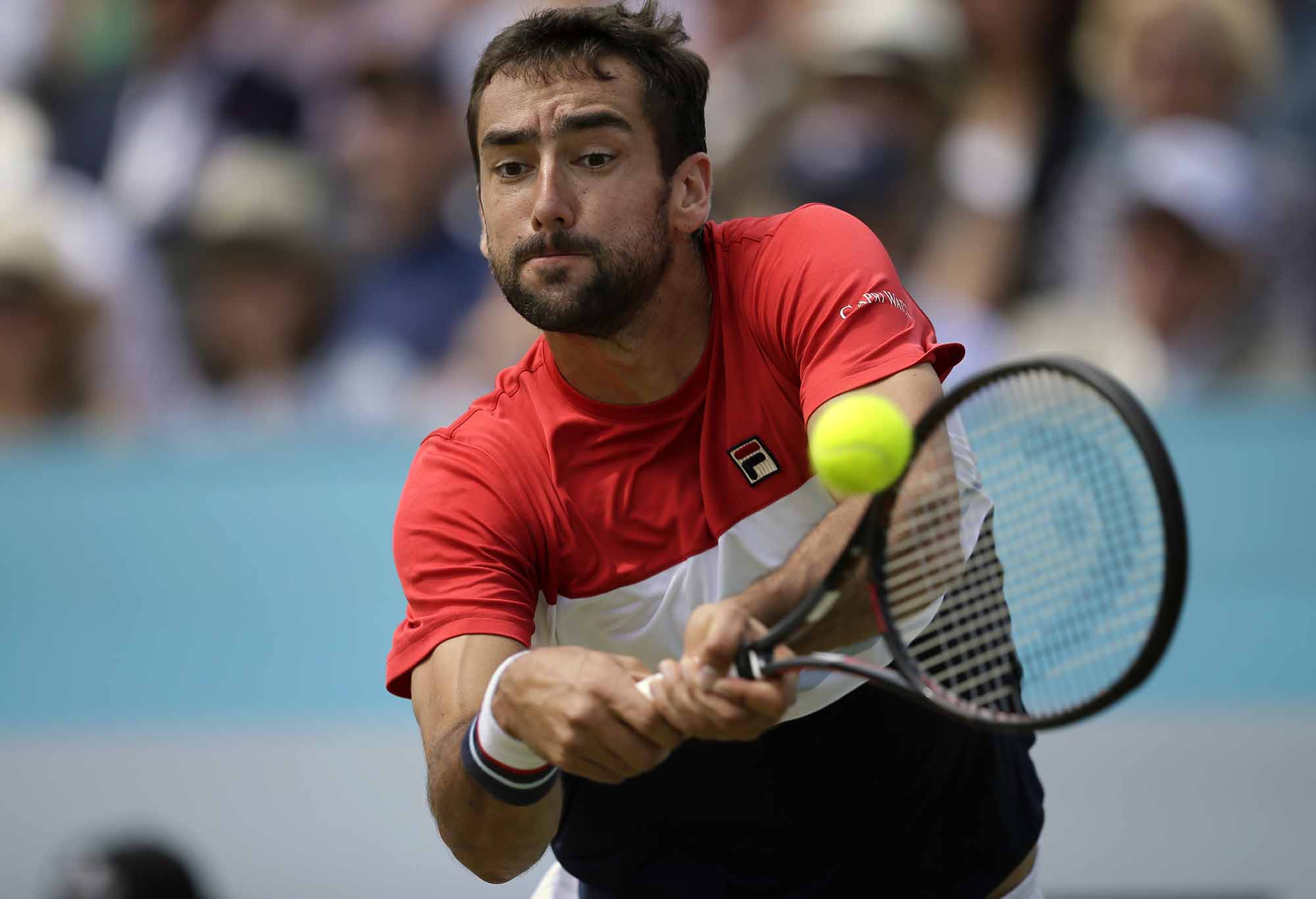 Croatia’s Marin Cilic is through to the next round. (AP Photo/Tim Ireland)

Kyrgios was again at his best against Hoang, blasting 24 aces past the French wildcard, but also briefly lost his cool in the third set when he questioned the umpire’s decision to commit to a challenge after he had called “game”.

Popyrin, meantime, came from a set down to defeat Kukushkin, who’d upset Wimbledon semi-finalist Roberto Bautista-Agut in the first round.

For the 20-year-old, it is the second time this year he has reached the third round of a Major, after getting this far at the Australian Open in January, where he defeated Dominic Thiem (albeit the Austrian retired due to injury) en route.

Blocking their paths to a last-16 meeting, which would guarantee an Australian quarter-finalist, are Andrey Rublev, who advanced when Gilles Simon retired after losing the first set 6-2, and Italian Matteo Berrettini, who needed four sets to oust another Australian, Jordan Thompson.

With the second round for both the men’s and women’s in the books, Round 3 gets underway this morning with Roger Federer and Serena Williams headlining the day session on Arthur Ashe Stadium before Novak Djokovic and Madison Keys light up the evening session.

Federer will be up against Dan Evans, while Williams, who dispatched Maria Sharapova in the first round but had to come from a set down to defeat Caty McNally, will take on Karolina Muchova as she looks to close in on a quarter-final duel against Ashleigh Barty.

Keys, the recent Cincinnati champion, will take on 20th seed Sofia Kenin for the second time this month after the pair had met in the semi-finals in the Ohio capital, while Djokovic will be up against Denis Kudla.

On Louis Armstrong Stadium, Karolina Pliskova and Ashleigh Barty will look to continue ramping up the pressure on Naomi Osaka for the world number one ranking when they take on Ons Jabeur and Maria Sakkari in their respective third round matches.

2016 champion Stan Wawrinka then comes up against Italian lucky loser Paolo Lorenzi, with his sights set on a potential fourth round showdown with top seed Novak Djokovic.

Matches to watch on Day 5