There was a cloud hanging over the Australian racing industry on Saturday as participants prepared for a day at the track.

Still mourning the death of Victorian jockey Mikaela Claridge, who died after a track work fall at Cranbourne on Friday, the industry had to push through with millions of dollars of prize money up for grabs across the nation.

And for a moment we were able to smile as we saw some terrific displays of skill and class on the turf at Caulfield, Rosehill and Eagle Farm.

The victory of Scales of Justice in the Group 1 Memsie Stakes was a sheer thrill for those connections, as well as the punters who were on the well-backed runner.

But just as the industry had moved forward, the racing world was brought back down to earth again following the death of NT-based hoop Melanie Tyndall.

As someone who is friends with many jockeys in a handful of states, every time I hear the news about a jockey who has been airlifted after a track work accident, I shudder to think it might be someone I know. Or someone they know.

But after speaking to Townsville-based rider Bonnie Thomson on Saturday night, I realised that any time a jockey or track work rider is injured or killed, it impacts the entire racing fraternity. Only someone who has been legged up on a racing thoroughbred can truly appreciate the danger.

There’s no doubt Australian racing is as safe it has ever been. Plastic running rails, improved helmets, compulsory safety vests and strict penalties for reckless behaviour in the saddle have reduced the number of injuries and fatalities in the sport.

It will never be an industry without risk, but that doesn’t mean we can’t strive to bring down the number of accidents.

My thoughts are with the families and friends of Mikaela and Melanie. 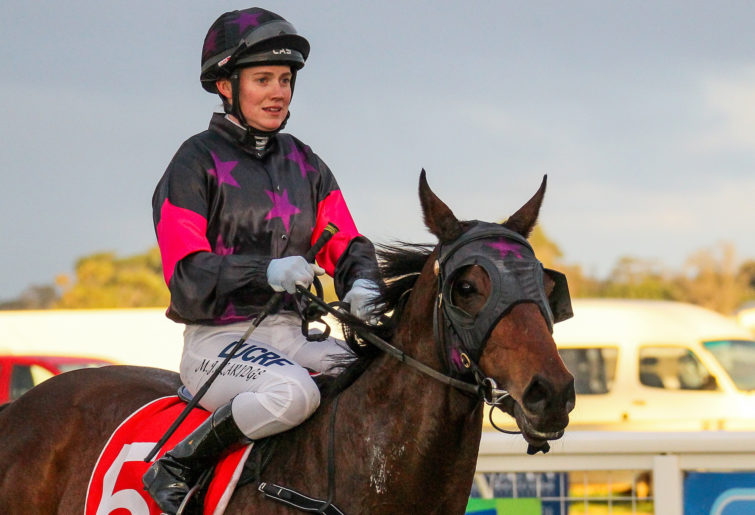 Exceedance the boom horse
The small field might have helped him but it was hard not to get excited about this colt’s performance on Saturday.

The three-year-old was first-up from a spell and gave his rivals windburn. Favourite Biovuac ($1.40) certainly felt the wrath of the Team Hawkes-trained wunderkind.

Hugh Bowman was sitting as quiet as a church mouse aboard Bivouac at the 300m mark, but when Exceedance loomed up, having stalked the front runners, the favourite had nothing left to give.

In the blink of an eye, the $4.80 second elect went whoosh and put a gap on the field to win by two lengths.

Speaking to Sky Sports Radio on Sunday, co-trainer Michael Hawkes said his team had yet to lock in plans for the boom colt, although suggested the Golden Rose was a likely target.

“It has always been there (the Golden Rose), it and the Coolmore. We don’t like to get ahead of ourselves. It’s not that we don’t like to tell anybody, we wanted to see where he is at,” he said.

“He won so impressively yesterday. He’s just got a blistering turn of foot on wet or dry. The thing is, where do you go? Do you keep him at sprints or do you step him out to a 1400m Golden Rose or possibly a mile (for the) Guineas?

“These colts, you’ve really got to tread lightly and place them in the right races where they can win to try and get their stud value and that’s what we’ll do with this bloke now.”

Wherever Exceedance goes, you know he’s worth following.

As for Bivouac, I’m happy to forget that run, but another shocker like that would have him in the sack file.

Justice for the Cox Plate?
Scales of Justice wouldn’t be the first Memsie Stakes winner to go on to claim a Cox Plate, but is that where the former WA galloper is headed?

Jockey Dean Yendall certainly thinks it could be the right race for him.

“This horse is a bit tricky – he can be a bit lazy I probably blame myself a little bit for the Adelaide defeat not doing enough on him work-wise,” Yendall said post-race.

“He just had a superior run through the race today, I produced him early and let him rip and he just took off. Maybe there is the Cox Plate there for him come late October.”

Trained by Lindsey Smith, who moved to Victoria at the beginning of the year, Scales of Justice picked up his first Group 1 back in 2016 in the Railway Stakes.

Smith said he was yet to decide on the next race for Scales of Justice, but said the venture had been justified by the win, from which connections pocketed $600,000 of a $1 million prize purse.

She won the same race last year and is showing no signs of slowing down, but don’t expect her to be seen in Australia this spring. Connections, including trainer Jamie Richards, seem content on her racing against the best Kiwis.

Melody Belle was supposed to race closer to the speed but missed the kick when the barriers flew open. A patient ride by Michael McNab proved the difference as the mare flew down the outside to win in style.

“It was a no-panic ride,” Richards said.

“She stepped half a stride slow, but they went really good tempo, which probably worked in our favour.

“She was beaten fair and square (first-up in the Foxbridge), but I knew the 1400m was really going to suit her and she has done a terrific job.”

Elvis impresses
I am not getting too excited about a Class 6 Plate at Eagle Farm, but it was hard not to be impressed by the win of Looks Like Elvis on Saturday.

His classy win over 1815m at Brisbane HQ was eye-catching and you would have to think he’s going to be a big chance in the Group 3 Newcastle Cup on September 20.

The stopwatch was also impressive – apprentice Nick Keal guided Elvis home in a sub-34 second final 600m to win by three lengths in a canter.

“Brian Dais (trainer) has done a brilliant job with this horse, picking him out at the sales and nurturing him into the horse he is now,” part-owner Craig Morrissey told the Sunday Mail.

“I think most people thought we were kidding ourselves going interstate last preparation, but he acquitted himself very well and I think he’s a better horse now.

“Personally, I don’t think there’s a better traveller of horses in Brisbane than Brian and I’m looking forward to getting down to Newcastle.”

No luck for Hartnell, but he’s flying
Those who followed my tips from Friday had little joy (apologies), but the run of Hartnell in the Memsie Stakes was encouraging.

Craig Williams couldn’t find daylight on the veteran galloper and he hit the line powerfully when he eventually got clear.

The Makybe Diva (1600m) in a fortnight seems a likely race, even though it will be against future champion Mystic Journey.

Put Hartnell in your black book regardless, because a win is around the corner.

And if you’re looking for a hot tipster, Twitter guru and Sky Racing analyst Brad Davidson had a day to remember on Saturday, tipping winners left, right and centre at Rosehill. Two of his tips were at double-figure odds.

One thing I know about the punt is that when you’re hot, you’re hot. No one was seeing them better than Davo on Saturday.