The Port Adelaide Magpies ran out convincing 30-points winners over the Crows in a SANFL qualifying final that could very well have been dubbed the battle for the future – a battle Port Adelaide appear to be winning.

As the AFL entered its pre-finals lull and with both Adelaide teams missing the top eight, the opening week of SANFL finals took centre stage in South Australia.

For those who watched, the calibre of the game did not disappoint – indeed watching a SANFL game at Adelaide Oval gave it a certain gravitas. Perhaps it was simply the players rising to their surroundings. Certainly on this form both teams could give the AFL bottom dwellers a run for their money.

It was a game Port powered over the opposition, looking slick and organised with boundless energy, a veritable team of champions – until, that is, they entered their forward line.

In the end, however, the weight of numbers eventually told, and the Magpies broke away in the last quarter, having dominated the inside-50s over the course of the game 64-37.

On last night’s evidence Port have developed a deep list with a range of interesting talents.

Clearly the club have greatly expanded their knowledge of how to run a successful secondary team in the SANFL in the last few years. They have recognised that developing youth and being a successful team go hand in hand.

Port have recruited solid experienced professionals and role models who will play for the Magpies almost exclusively. These players, like Cam Sutcliffe, Jack Trengove and Trent McKenzie give the Magpies team a foundation the grow from.

Here’s a review of the outstanding performers in each area of the team, with a focus on scouting young players of potential.

Defensive standouts
Joel Garner and Trent McKenzie were pulling the strings all night from deep for Port, two quarterbacks in their element, using their excellent penetrating kicks to firstly stretch the Adelaide press and then punch through it once the holes opened up.

McKenzie was the more dominant of the two and, at 27, is very much a capable senior player. His ability by foot is frankly devastating and really deserves to be exhibited further at AFL level.

Meanwhile, at just 20 years old, Garner has a strong future. He looks AFL ready in both body and mind. He is calm in the storm.

Finally, young rookie Martin Frederick has developed strongly since I last saw him earlier in the year, with his run and defensive efforts across half-back particularly impressive. 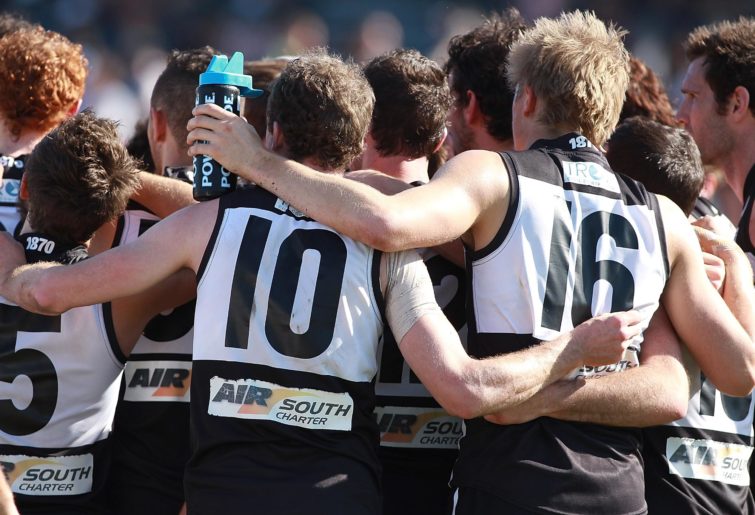 The midfield line
Port were largely dominant in the middle of the ground, with young midfield tyros Willem Drew and Joe Atley supported by reliable veterans Jack Trengove and Cam Sutcliffe. This dominance was aided by the youthful ruck duo of Peter Ladhams and Sam Hayes, who feasted in Sam Jacobs’s surprising absence.

Big bodied but still only 20 years old, Willem Drew has shown he belongs at AFL level this season, playing 10 AFL games. In the SANFL finals level he brought a dominance which put an exclamation point on his rapid rise, gathering 32 touches.

The other solidly built youngster running riot at times was Joe Atley, recently 21, who had slightly fewer touches (28) but caught the eye with his ability to break away from clearances (racking up ten) with pace. Atley, the younger brother of North Melbourne’s Shaun, broke into the AFL team for only one game this year, but on this form he deserves further opportunities.

However, of all the unique talents, emerging ruckman Ladhams glittered most overtly. In the moment of the game Ladhams burst out the back of a contest like a rover to slam through a goal on his natural left foot from 45 metres on the run, lighting up Adelaide Oval.

If you were designing the prototype ruckman for the modern game, this young man might be a close approximation. Certainly with his pace, athleticism and unexpectedly deft left peg he appears to be the reason the club is somewhat apathetic to Paddy Ryder’s likely exit.

The big man matched his hit-out numbers with disposals (23), kicking two team-lifting goals. ‘Two-metre Peter’, as he has been dubbed, is well and truly cementing his emerging fan favourite status.

The forwards
Further up the ground the young trio with AFL experience Todd Marshall, Billy Frampton and Kane Farrell appeared deadly on paper, yet between them they managed only 1.3 on the night. However, pleasingly they found other ways to contribute and worked up the ground well as others took up the goalscoring burden.

Sam Mayes, the experienced former Brisbane Lions player, kicked 3.2, and young Tobin Cox took fans on a roller-coaster of emotion as he kicked 2.5.

The young and diminutive rookie-listed Cox began well with a goal before shockingly kicking five points in a row. After his first miss came off the side of his boot, the 20-year-old clearly lost his confidence on the big stage and preceded to alternate which side of his foot his kicks would come tumbling off, to the groans of the crowd.

However, around the 15-minute mark of the last quarter and with the game still in the balance Cox found himself with another opportunity, his last. The young man steadied himself and put through his second goal for the feel-good moment of the game as fans and teammates alike were relieved of tension with uninhibited joyous celebrations.

Port would go onto kick three of the final four goals to run out 30-point winners.

While the misses were unfortunate, putting himself in the position to have seven shots at goal in a final is hugely encouraging for a first-year rookie. He may be an unexpected gem in the making.

In many ways Tobin Cox summed up the story of the night. There were growing pains, but on the biggest stage available to them Port’s youngsters produced a performance of real power and maturity, hanging tough and backing themselves in.

Port Adelaide Magpies will now play table-topping Glenelg next weekend, with the winner earning a week off and a place in the grand final.