Have England come good for the Rugby World Cup just in the nick of time?

If it was not injury, it was misadventure. So many of England’s selection hopes before the 2015 World Cup were pinned on centre Manu Tuilagi, who had been injured since the summer of 2014.

When it finally seemed that he might become available again, he was arrested for criminal damage and the assault of a police officer only short four months before the start of the tournament.

Stuart Lancaster was reluctantly forced to eliminate Tuilagi from consideration, and England ended up fielding four different starting combinations at 10, 12 and 13 in as many pool games.

That memory still evokes a wistful imagination of what might have been for the ex-England coach.

Eight years earlier, one of the most important selection decisions had been made not among the pool of players, but behind the scenes.

Before the 2007 World Cup in France, South Africa’s coach, Jake White, brought on board his good friend Eddie Jones as a consultant, and that gave the Springboks a magic ingredient to add to the traditional strengths they already had in abundance.

While White could teach defence, the kicking game and aspects of forward strategy such as the driving maul, Jones would add the missing element: a creative edge to the backs off set-piece.

Jones quickly identified that the main source of creative genius behind the scrum was number 9 Fourie Du Preez rather than outside-half Butch James – and Fourie was then playing at the peak of considerable powers.

Jones found an assortment of ways to utilise those talents, ranging from long cross-kicks to the sideline from tapped penalties to a selection of shortside moves off both lineout and scrum. Between them, Jones and Du Preez represented the sharp, thinking man’s rapier to the traditionally brawny Bokke bludgeon.

Perhaps the Australian was thinking of his own appointment to the South African role when he asked another highly experienced international coach, Kiwi John Mitchell, to be his main coaching stablemate in the lead-up to the 2019 World Cup. Two rugby intellects can work better than one, especially if they complement each another harmoniously.

Only four weeks before the start of the 2019 competition, Jones has enjoyed a stroke of luck his predecessor in the job never enjoyed. Tuilagi has returned to full fitness at just the right moment to become a highlight feature in a tournament from which he was so conspicuously absent four years earlier.

The midfield in 2015 was scheduled to be composed of George Ford, Owen Farrell and Tuilagi, but the mixture of injury and misadventure blew that plan out of the water.

It is no coincidence that this is exactly the same combination Jones selected at 10, 12 and 13 for England’s most impressive warm-up performance against Ireland at Twickenham, and I fully expect it to be England’s first choice during the World Cup in Japan.

The addition of Tuilagi at number 13 and Joe Cokanasiga at 14 gives Jones the luxury he never enjoyed in his first couple of seasons as England coach – two big men in the backline who can help create and finish launch plays from set-piece.

Tuilagi is 114 kilos and has been lovingly nicknamed ‘The Pinball Machine’ by his coach for his knack of banging unfortunate tacklers around. Cokanansiga is even bigger, Jonah Lomu-esque in stature, at 1.93 metres and 122 kilos.

Against Ireland, those two additions gave Jones’ cleverly conceived backline starter plays from the scrum and lineout a lethal edge. The first deep cut was made from the scrum as early as the 12th minute:

The first key decision for the defence at a scrum on their right side near their own 22m line is where to position their own scrumhalf and shortside winger.

In this case, Conor Murray drops to the near sideline, and winger Jordan Larmour drifts across on a deeper line in backfield defence: 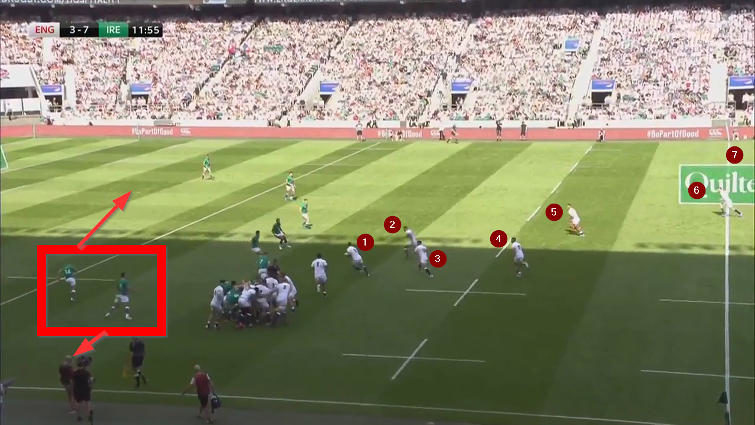 With Billy Vunipola able to make a pass from the base and both Murray and Larmour out of the picture, England have already engineered a potential seven-on-five situation.

The conversion of that advantage depends on the success of their decoy runners and the finishing power on their openside wing, and here the view from behind the posts is of great value:

England first pare down the seven-on-five to a four-on-two by forcing Ireland midfielders Ross Byrne, Bundee Aki and Garry Ringrose to plant their feet for the tackle, with accurate decoy lines by Farrell and Tuilagi: 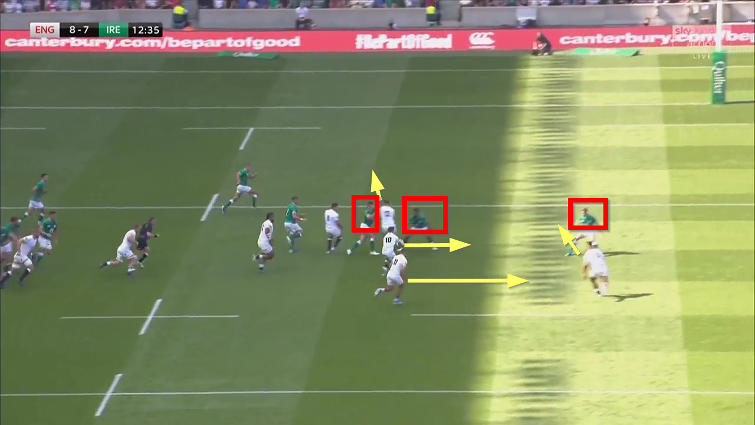 Outside the screenshot, they still have fullback Elliott Daly and right winger Cokanasiga available, with Ford and Johnny May to supply the transfers.

Once the ball reaches Cokanasiga’s hands, it is effectively game over for the defence. Although both Aki and Larmour are in pursuit, there is never any real likelihood they will be able to chase and bring the big man down once he gets up a full head of steam.

What makes this kind of set-piece play work is the credible quality of the decoys. Ireland have to be convinced that Tuilagi, in particular, is a genuine threat on the straight or ‘unders’ ball. At the end of the first quarter, they received any assurances they needed on that score in full measure:

Tuilagi first takes the ball on a switch from the lineout and ploughs the Ireland 7 and 10 out of the road, in much the same way as he once did to Dan Carter and Richie McCaw on that memorable afternoon at Twickenham back in 2012.

In the second instance, his starting position flat on his face is far less promising, but he still manages to get back up on his feet and shed three Ireland forwards before delivering an offload to Ben Youngs.

Tuilagi duly received the ultimate reward for his ability to take standstill ball and turn attacking water into wine at the end of the first period:

Another ‘Barnes Wallis’ bouncing pass makes no difference at all to Tuilagi’s ability to cut the line!

It is this powerful threat which makes defensive choices so difficult for the opposition number 13, who regularly has to decide whether to stay for the inside run or shift for the attack out wide.

In the second half, Ringrose again found himself hooked on a Tuilagi decoy, and unable to marshal the wider power threat of Cokanasiga outside him:

At the key moment, the Ireland outside centre is in a no-win scenario. If he drifts out to Cokanasiga, he will cut Tuilagi loose. In the event, he takes the more pressing threat, and that releases the big England right winger up the middle: 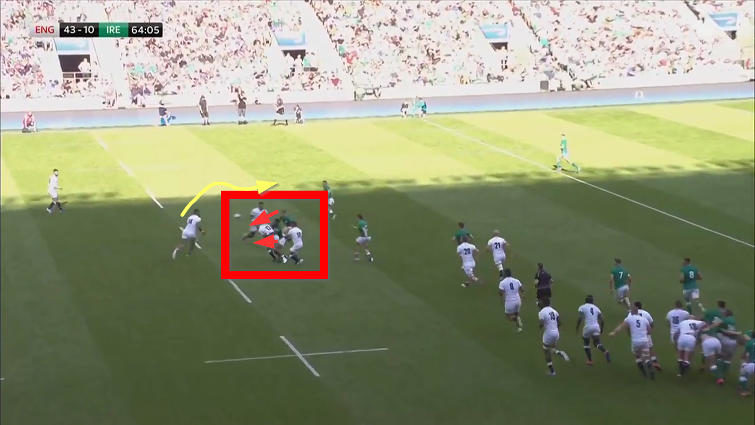 Once Cokanasiga receives the ball, his finish is even more impressive than its cousin in the first period. He runs straight past three potential cover tacklers to score near the posts without a significant hand being laid upon him.

Summary
The headline of this article may appear a tad ungenerous after Jones’ spectacular run at the beginning of his England tenure, winning 25 of his first 26 matches in charge.

But, in truth, this side have been flying under the radar for the past 20 months or so. Since the start of 2018, they have won only nine of their 18 games and have fallen behind both Ireland and Wales in the northern hemisphere pecking order.

In particular, some decent backline size has arrived at the 11th hour. While Ben Teo’s rise and fall was equally meteoric in both directions, the man England needed so badly at the 2015 World Cup, centre Manu Tuilagi, has returned after three seasons blighted by injury.

The midfield plan for that tournament, featuring George Ford at 10, Owen Farrell at 12 and Tuilagi at 13, now looks likely to become England’s number one combination in Japan.

It gives Jones’ patented launch plays from the set-piece a real cutting edge, with Tuilagi able to convince defenders on the carry and decoy inside, and Joe Cokanasiga finishing with extreme pace and power outside him.

It is a potent mix which even New Zealand may not be able to match.

For the first time in their rugby history, England can project four players of islander ethnic origin in their starting XV – the Tongan Vunipolas at loosehead prop (Mako) and at number 8 (Billy), a Samoan from another famous rugby family at 13, and a Fijian giant on the wing.

There may be a rose rather than three Lions on the shirt, but it could just be the perfect blend, discovered in the nick of time, to ensure that a second World Cup in the professional era is coming home.