Can Grigor Dimitrov finally shed the name of 'Baby Fed'?

At the age of 26, it appeared that Grigor Dimitrov had finally shed the pestiferous nickname of ‘Baby Fed’.

The Bulgarian had just won the 2017 World Tour Finals and he finished the year ranked number three.

He seemed primed to launch an assault on the top of the game.

But Dimitrov, more than most players, has always been a confidence player.

An ever-present fragility has lingered over him like the icy spectre of death extending out a withering hand.

Despite showing battling qualities to get to the quarter-finals of the 2018 Australian Open, that brittleness reared its ugly head when he lost in four sets to unseeded Kyle Edmund.

Other than a final showing in Rotterdam, where he lost badly to Roger Federer, 2018 proved to be a year to forget.

Dimitrov suffered first-round defeats at that year’s Wimbledon and US Open, had a winning percentage of 56per cent, down from 72per cent in 2017, and he finished the year ranked 19.

All too often, he was tentative on break points, too passive on other big ones, his footwork was questionable and his decision making was baffling. Something was not right.

Before the US Open, Dimitrov had won 12 matches and lost 15, had slumped to 78th in the world – his lowest since 2011 – and in his last eight matches he had won just once.

In May, he parted company with the coach that had brought him unprecedented success, Daniel Vallverdu.

That coupled with a troublesome shoulder injury earlier this season and a huge drop in confidence and quality, Dimitrov looked like he might fade out of existence. The prophets of doom were closing in.

The troubling element of this is that we have seen this before.

Dimitrov had his breakout season in 2014, where he reached the semi-finals at Wimbledon, won several titles and made it into the top 10 for the first time.

The perfect harmony that was beginning to prevail then turned to ash.

After Wimbledon, Dimitrov was not quite the same player. The expectation was there but the results only got worse.
The storm clouds began to gather and before long a jarring note had bounded onto the scene.

Dimitrov ended the year at number 11 and then went backwards in 2015 to finish at 28th.

Perhaps the most noteworthy incident of his season in 2016 was in the Istanbul final against Diego Schwartzman where he smashed three rackets, which resulted in a match-ending penalty.

‘Baby Fed’ finished the year just inside the top 20 and we all know what happened in 2017.

His career to date: A huge talent. A prospect. The next big thing. Disappointment. Resurgence. Falling. Plummeting. Renaissance?

And yet, all of these troubles, trials, and tribulations could be a thing of the past. 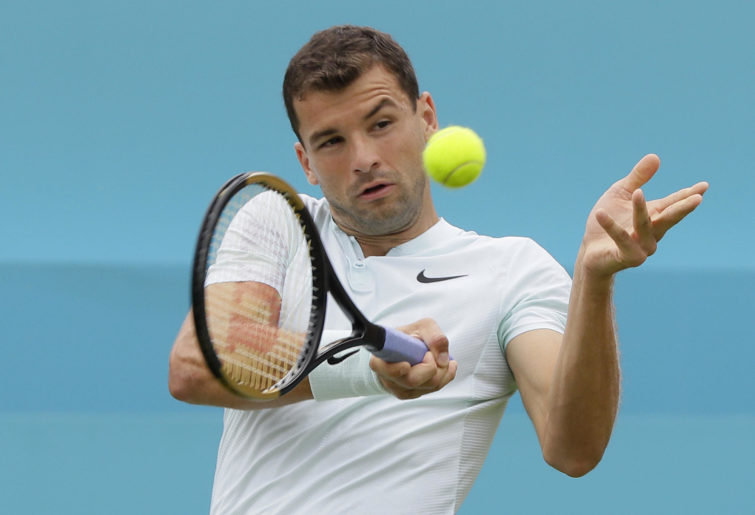 The unfancied Grisha, as he is affectionately known as, quietly and confidently made his way into the second week of the US Open and then stunned Federer in the quarter-finals in a five-set victory.

Previously, he was 0-7 versus the Swiss. To paraphrase former grand-slam winner, Vitas Gerulaitis, nobody beats Grigor Dimitrov eight times in a row…

When asked about his 2019, he said after his victory: “It was that low that I don’t even want to go there anymore. It was just obviously injury, losing points, ranking. That’s the lowest point of any player.

“The past six, seven months have been pretty rough for me. But I had somebody to lean on, my friends, my family.

“I kept on believing again in the work, the rehab I had to put behind my shoulder, the exercise, the practice, fixing up the racquet a little bit.

“There were so many things I had to adjust in such a small but big period of time. Next thing you know, you’re almost (at the) end of the year, you have a result like that. It’s pretty special to me.”

Now he is two wins away from the unthinkable. A grand slam.

Dimitrov may not win at Flushing Meadows. He may yet come unstuck against Daniil Medvedev, the man who has won more matches than anyone else in 2019 and has risen to fourth in the world.

But Dimitrov is good for tennis.

He may not be Federer but he is a great player to watch when he is firing on all cylinders.

But who knows, we might just see another fairytale in New York.