The AFL Finals series is officially underway after West Coast defeated Essendon at Optus Stadium, knocking them out of the premiership race. Here’s my talking points from the match.

What’s next for Worsfold?
After last night’s 55-point loss saw Essendon’s season come to an end, it seems inevitable that attention will now turn to the issue of John Worsfold’s future at the club.

The AFL hasn’t seen a coach sacked after making finals in fifteen years, but there has been so much smoke about Worsfold not just in recent weeks but over the course of the season as a whole that we can reasonably presume the existence of fire.

Worsfold has led the club for four seasons now, including through arguably the most difficult of its history, in 2016.

He has made finals twice but been comfortably defeated in both displays. Last night’s loss follows on from a 65-point thrashing against Sydney at the SCG two years ago.

A side that has been one of the league’s most active at the trade table over the last two years would expect a lot more than they have gotten. Bar something unexpected, the 2019 draft will mark three consecutive years without taking a first-round pick.

Worsfold is a long way from being the only person to blame for Essendon’s malaise. But, I suspect he has probably coached his last game at Essendon, perhaps fittingly against the club with whom he has so much history. 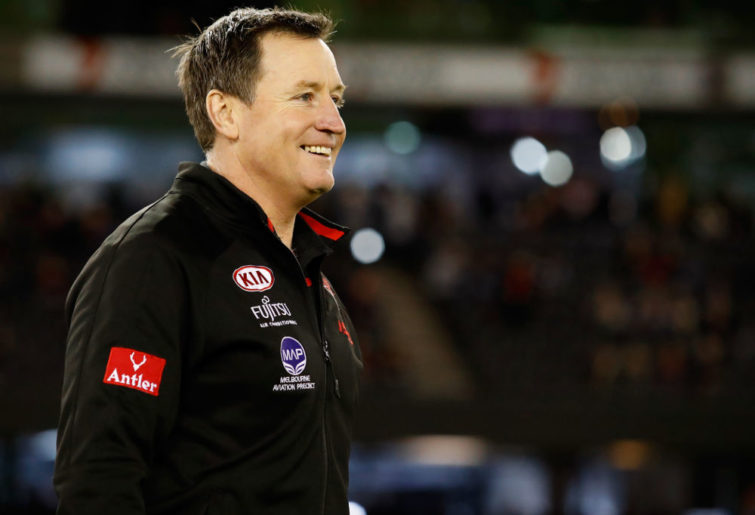 Will Nic Nat get a whack?
The altercation between Nic Naitanui and Zach Merrett breathed some fire into a third quarter that was struggling to entertain on Thursday night, and probably neither player will sit comfortably watching the footage.

Merrett has nowhere to hide as the instigator of the incident. Naitanui, on the other hand, while acting in his own defense, most would agree was unnecessarily excessive in his response.

Both will be in the sight of the MRO, and Michael Christian faces a difficult decision. Both clearly stepped over the line, but whether it is to the degree of a fine or a week off is debatable.

A ban won’t bother Merrett too much – it’s not ideal, but the frustration of Essendon’s season being over at this early point isn’t going to be made much worse by missing a week or two to start 2020.

However when it comes to Naitanui there’s the obvious dilemma of it being such a significant decision to ban a player from a finals match, especially one of Naitanui’s profile, and for an incident that isn’t clear-cut.

To Christian’s credit, he’s shown a good ability to put those factors aside and make the decision he thinks is right.

The tribunal has been more lenient, and many players have been able to get his decisions overturned this year. Don’t be surprised if this one goes the same way.

Dons’ finals drought rolls on
Although they were never going to enter the match as favourites, some small part of each Essendon fan would have entered Thursday night hoping this might finally be the match where they break their longstanding finals drought.

It was not to be, and really, it was never a serious chance. The style of football that Essendon play – fast, but without a great deal of finesse – can threaten many teams, but West Coast are not one of them.

The Eagles are arguably the best ball movers in the competition. They can struggle when starved of access to it, but that’s not a trick Essendon could pull on them.

The Bombers best hope would have been to dominate the air in defense, but they simply didn’t. Including both Cale Hooker and Michael Hurley in the side while underdone was a roll of the dice Essendon had to take, but it didn’t work out for them.

Instead Josh Kennedy and Jack Darling dominated the game, particularly in the early stages, putting a margin on Essendon in the first quarter – and West Coast’s smalls weren’t bad either.

So, it becomes fifteen seasons without a finals win for this club – with more than a few losses in that time, and many of them by significant margins, as this one was.

Dons must keep Daniher
For mine the biggest takeaway from Essendon’s performance last night was that if this club is seriously considering trying to move on Joe Daniher, they must cancel those plans.

Who stood up for Essendon last night? Who are the club’s A-graders? This is a side that, despite makings finals, not only had no players in the All Australian 22, but none even in the squad of 40.

Andy McGrath put in a good shift in his second crack at finals footy with 30 touches and a goal. Adam Saad and Anthony McDonald-Tipungwuti both had some good moments.

Dyson Heppell racked up 31 disposals, but couldn’t lay a single tackle for the night. The Bombers managed only one more tackle than their opponents for the match, despite having far less of the ball.

Part of this can be put down to poor delivery, but not all of it. Some players are good enough to have an impact in the home-and-away but not the finals, and McKernan and Brown – with just eight disposals between them – feel like they’re in that category.

Daniher may have his headaches but he’s one of the few genuinely A-grade talents on Essendon’s list, and they’re not going to find a like-for-like replacement. Moving him on would be madness.

Is West Coast’s flag defence alive?
After looking so poor against Hawthorn two weeks ago, West Coast were irresistible on Thursday night, and gave Collingwood or Geelong – whoever loses tonight – something to be worried about.

There’s no doubt in my mind that this West Coast team can beat any other side in the competition. In an era where pundits often bemoan the lack of good skills on show, the Eagles possess them in abundance.

Give them good conditions and their kicking is simply lethal. What’s more, it goes to a forward line that has such a nice mix of types, all of them dangerous.

But how likely are they to beat three of them in a row, needing to travel each week to do it? That is a far dicier proposition.

My gut feel is that, to put it simply, it’s unlikely. But the last three years being what they have been, you’d be a fool to write them off.