It might not be the best match-up of the round, but Cats-Magpies is certainly the biggest.

It’s got almost everything you want from a final: the MCG, prime time, a huge crowd, and two quality teams with realistic premiership aspirations.

There’s also just enough doubt over both of these sides to make the consequences of a loss a little more serious than your average qualifying final – and the reigning premiers await them.

It’s been a while since a minor premier was held in such low regard as these Cats.

Sure, they went 5-5 in their last ten games – although they were also 5-4 in their last nine if you want that to be your narrative – but they still finished on top of the ladder with 16 wins and a percentage of 135.7.

Narrow the sample size to just the final three rounds and beltings of the Roos and Blues sandwich a one-point loss at the Gabba to the team that finished second on the ladder. Perhaps their form isn’t as bad as it’s being made out to be.

We’ll have a better idea of whether they’re contenders or pretenders tonight, because there’s nowhere for them to hide. 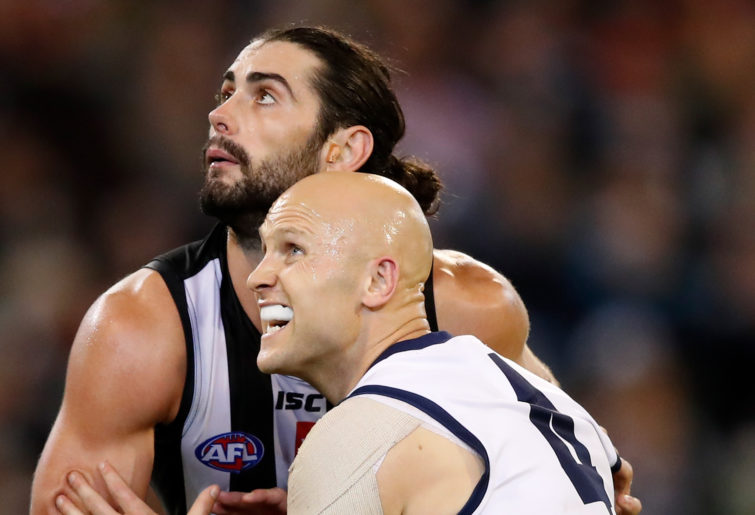 Collingwood’s form has been slightly more encouraging after a form slump that stretched about six weeks after their bye. It must be said, however, that their past four matches – all wins – came against the Suns, Demons, Crows and Bombers, which isn’t exactly a murderers’ row.

But, hey, wins are wins, and here they are in a qualifying final and bolstered by some crucial returns.

They don’t get much more crucial than superstar forward Jordan de Goey, who returns along with forward partner in crime Jaidyn Stephenson, whose betting suspension is ever-so-conveniently over, and the smooth Steele Sidebottom – the less said about his absence the better.

Matthew Scharenberg, Travis Varcoe and Jack Madgen have all been dropped.

For the Cats, Jake Kolodjashnij and Tom Atkins return for the injured Cam Guthrie and Lachie Henderson, who has been axed.

These are the two stingiest teams in the competition, so don’t expect a shoot-out tonight.

The Cats gave up a measly 66.5 points a game on average this season, while the Magpies gave up a touch over a goal more than that at 72.7 points.

The highest score by a team in the past three match-ups between these sides is 72, and with the stakes high and the weather predicted to be lousy, it’s fair to expect another dour affair.

Colingwood (49.2) and Geelong (49.4) are among six teams to concede, on average, fewer than 50 inside-50s a game, and the bad news for the Pies is that the Cats also concede a goal on just 18.7 per cent of opponents’ entries, which is the lowest rate in the league. The Magpies are eighth at 21.2 per cent.

It’ll be fascinating to see who the Cats send to De Goey. He’s a nightmare match-up who plays above his height without losing anything on the ground. Jack Henry might be the man – whoever it is will need help.

If anyone can test the Cats, it’s this Magpies forward line, which looks incredibly dynamic with De Goey and Stephenson joining Jamie Elliott, Will Hoskin-Elliott, Brody Mihocek and Josh Thomas. Sidebottom has been named in the front six as well. It’s stacked with class.

The Cats are no scrubs at the other end, of course. Tom Hawkins just earned his second All Australian selection, and Gary Ablett wasn’t far off his ninth. Luke Dahlhaus and Gryan Miers will make sure Collingwood’s defenders feel their presence.

Gary Rohan has gone cold after a hot start to the season. He’d be desperate for a good game or might just find himself out of the side in the Cats’ next match, whenever that is.

As is so often the case, it’s in the middle where things get particularly tasty. With so much star power, you’d think these sides would be dominant at the stoppages, but Collingwood are 11th and Geelong 12th for clearance differential, with both teams near enough even with their opponents across the season.

They are, however, both exceptional contested possession teams. The Cats are No.1 in the league with a +10.5 average differential and the Magpies are third at +8.4.

Patrick Dangerfield, Tim Kelly, Mitch Duncan and Joel Selwood on one side. Scott Pendlebury, Adam Treloar, Taylor Adams and Sidebottom on the other.

The Cats probably have a slight edge there, until you consider the man who is perhaps their biggest problem: Brodie Grundy.

Rhys Stanley was outstanding against Grundy when these sides last met back in Round 1. But as Stanley is wont to do, he has failed to maintain that level throughout the season.

Geelong need him tonight to at least drag Grundy down from his best.

Tonight shapes as a brilliant match-up, and that’s most welcome after last night’s lopsided affair.

It’s damn tough to split them, but I think the Cats will get the job done and silence some of the doubters.