Ratten is the third caretaker coach this year to win the top job and has set his sights on returning the Saints to the finals for the first time since 2011.

“We have a strong core of talented young players who are determined to drive the club forward,” Ratten said in a statement on Friday.

“I have loved working with the guys over the past 12 months and their development gives me great confidence in what we can achieve as a football club in the coming years.

“As I acknowledged after round 23, we know there are areas that we have to improve and that will be the focus this off-season.”

Ratten has signed a three-year contract with the Saints.

He follows North Melbourne’s Rhyce Shaw and Carlton’s David Teague as caretaker coaches who are now in the chair for next season.

But unlike Shaw and Teague, who made their senior coaching debuts this year, Ratten was an old hand when he took over from Alan Richardson for the last six rounds.

Ratten coached Carlton to the finals from 2009-11 before being controversially sacked in 2012.

He was then an assistant at Hawthorn during their 2013-15 premiership three-peat and joined the Saints this year.

After replacing the departed Richardson, Ratten led the Saints to three wins in their last six games.

“We were able to evaluate Brett across six weeks as interim coach and through the opportunities he had to present to the panel,” St Kilda president Andrew Bassat said in a statement.

“At every stage, he gave us great confidence that he is the right person to lead our football program.

“We know as a football club we have to lift in a number of areas to achieve the consistency required to play finals football … Brett is the right person to lead our coaching group in driving that improvement.”

Collingwood assistant coach Justin Longmuir is favoured to take over at the Dockers but any announcement will be delayed until after the Magpies’ finals campaign, which begins with a qualifying final against Geelong on Friday night. 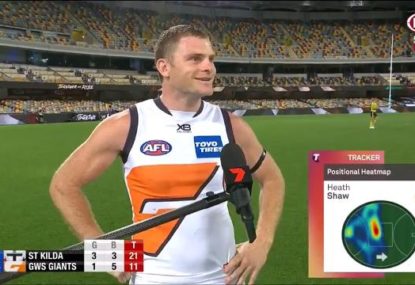