Australia retain Ashes in a thriller

For the first time in 18 years, Australia have claimed the Ashes on English soil. In yet another thrilling finish, the English tail fought valiantly before the tourists finally secured a 2-1 series lead moving into the fifth Test.

Australia looked to be headed for a comfortable win when they reduced England to 8-173 with the home side still needing to survive up to 30 overs for a draw.

Then lower-order batsmen Craig Overton and Jack Leach stonewalled with fantastic composure. With each over they survived, pressure mounted on Australia.

For 14 overs, that pair frustrated the Aussies and it took the unlikely figure of Marnus Labuschagne to separate them with his leg spin when he had Leach caught in close.

Then Josh Hazlewood produced a lovely off-cutter to earn an lbw against Overton and set off wild celebrations.

While Australia surely will be intent on actually winning the series when they head to the Oval, last night was a major achievement for a team that has had many dark moments in the UK since their last series win there in 2001.

Australia were shocked by the English underdogs in 2005, dominated large parts of the 2009 series but stumbled in the key moments, were comprehensively outclassed in 2013 and fell apart when the pitches were lively in 2015.

This time around Australia have showcased a resilience that was absent in the previous two series. In 2013 and 2015 when England built momentum Australia crumbled. In this series, however, Australia repeatedly have found ways to haul themselves out of perilous situations. 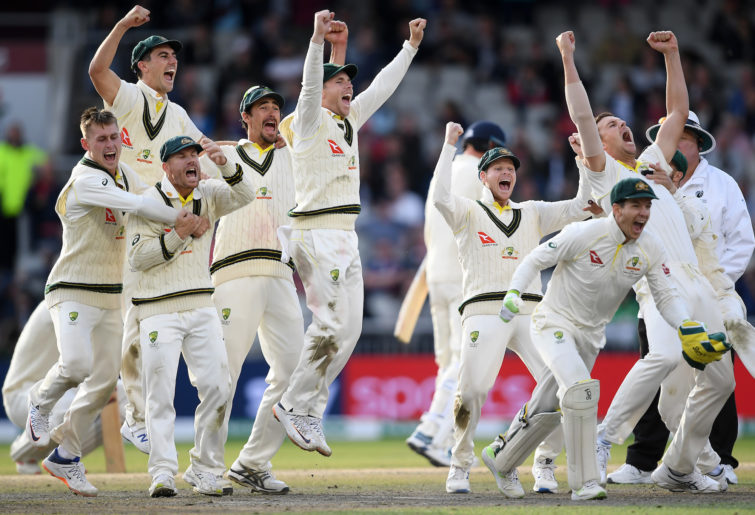 In the first Test they recovered from 8-122 to post a competitive total, then in their second innings were two wickets down still needing another 63 runs to make England bat again. Yet somehow they turned those predicaments into a massive 251-run win.

Then at Lord’s England had them on the rack. Genius batsman Steve Smith had been knocked out of the Test, quite literally, and their vulnerable batting line-up had to find a way to eke out a draw in very tricky conditions against a rampant England attack. They managed that.

Without Smith, the Aussies were rank underdogs in the third Test. Yet they controlled that match until the dying minutes when they were thwarted by a freak knock by Ben Stokes. Once more many pundits and fans predicted this would be too savage a blow for Australia to recover from, that it would scar them mentally.

When they slumped to 2-28 on Day 1 at Old Trafford there was a sense that maybe those predictions were correct – that maybe the events at Leeds had indeed cooked the tourists. Again they showed gumption.

While their huge first innings total here was built on Smith’s 211, the Aussies also got vital input from Labuschagne (67), Tim Paine (58) and Mitchell Starc (54*).

This solid spread of contributors continued with the ball as Starc, Pat Cummins and Josh Hazlewood all had a notable impact to help roll England for 301 in good batting conditions.

At 4-44 batting a second time, Australia were at risk of letting England back into the match. Then they rallied again through Smith and Wade, whose 105-run stand was scored at 4.4 runs an over to give Australia time to declare and get a crack at England before stumps on Day 4.

The time that pair bought their side proved to be crucial as Cummins grabbed two wickets late in that day, which all set it up for the Aussie bowlers to make one final push towards retaining the Ashes yesterday.

England didn’t roll over. The hosts batted with more patience than they have shown throughout most of this series. Australia’s bowlers were forced to toil for their reward.

Cummins again underlined why he is the number one ranked Test bowler in the world, maintaining an impeccable line and length that exploited any lateral movement and variable bounce on offer.

He castled Jason Roy with a delightful in swinger that opened up the England rookie and then caught Ben Stokes in two minds, catching the under edge of his bat as he tried to withdraw his blade.

Then the stubborn innings of Joe Denly (53) was ended when Nathan Lyon got an off break to leap off the pitch, catch his glove and pop to short leg.

When Starc dislodged keeper-batsman Jonny Bairstow, just as he was beginning to take root at the crease, Australia were on a rip and the end looked nigh.

Instead Australia had to toil and fret for a long while yet, with the threat of bad light stopping play.

All that’s relevant now, though, is that Australia have retained the Ashes.