It was another interesting and strange week in college football, with some surprising results and one particularly big upset, and we wouldn’t have it any other way.

In case you missed the action, read on for a look at who covered themselves in gridiron glory and who didn’t with my week tro edition of winners and losers.

Winners
Clemson: the defending national champions handled Texas A&M 24-10 in Death Valley on Saturday afternoon for their 17th straight win. The Tigers are going to take some stopping this year.

Louisiana State: big 35-28 win on the road against Texas. Tigers quarterback Joe Burrow threw for 471 yards and four touchdowns against a shaky Longhorn defense to out-duel Sam Ehlinger in a game that featured more than 800 passing yards.

Maryland: if you predicted that the Terrapins would open the season by scoring 60 or more points in consecutive weeks, you’re a better judge than me. After blanking Howard 79-0, they handled Syracuse 63-20 behind three touchdowns from quarterback Josh Jackson and two more on the ground from Anthony McFarland Jr.

Peyton Ramsey: the second-string Indiana quarterback had himself a day out against Eastern Illinois, completing 13 of 14 passes for 226 yards and two touchdowns as the Hoosiers rolled 52-0 for their largest shut-out win since a 54-0 win over Nebraska way back in 1944.

Boise State’s freshmen: it wasn’t the most beautiful offensive performance we’ve ever seen but the Broncos’ freshmen class got the job done in a low-scoring 14-7 win over Marshall on Friday night. Quarterback Hank Bachmeier (282 passing yards and a touchdown) combined with running back George Holani (103 rushing yards) in a performance that has to have Bronco fans very, very excited for the future. As if that wasn’t enough, the team’s leading receiver, Kalil Shakir (95 yards) is a true sophomore.

Southern California: seven days ago, the Trojans struggled to beat Fresno State, lost their starting quarterback, and have perhaps unearthed a new star signal caller in freshman Kedon Slovis. The youngster led the Trojans back from 17-3 down, completing 28-33 for 378 yards and three touchdowns in a scarcely-believable 45-20 shellacking, ending the game on a 35-3 run. This certainly wasn’t how I expected the tumultuous week to end. But, like USC fans everywhere, I’ll take it.

Purdue’s passing offense: the Boilermakers had a day out against Vanderbilt on Saturday afternoon. Quarterback Elijah Sindelar threw for 509 yards and five touchdowns and electric sophomore receiver Rondale Moore caught a career-high 13 balls for 220 yards and a score. Important win for Jeff Brohm’s team after the opening-week capitulation against Nevada.

Virginia: Bronco Mendenhall leaving Brigham Young for Virginia a few years back seemed like a strange move, but he’s quietly built a strong program in Charlottesville. The Cavaliers flexed their muscle on Friday night in a 52-17 demolition of William and Mary. Quarterback Bryce Perkins threw for 192 yards and two touchdowns and added 68 and another score on the ground.

North Dakota State: the defending FCS national champions (who’ve claimed four of the last five national titles) lost their head coach Chris Klieman to Kansas State in the off-season but, just like when Craig Bohl departed for Wyoming, the Bison keep on keeping on. They’re 2-0 to start the year after a 38-7 win over North Dakota.

Coastal Carolina: the Chanticleers (their campus is in tiny Conway, South Carolina, in case you were wondering) recorded their first ever victory over a Power 5 conference school, outlasting Kansas 12-7. The Jayhawks are admittedly not the best example of a team from a Power 5 conference.

Xavier Jones: becomes the first SMU Mustang to have three or more touchdowns in consecutive games since Zac Line all the way back in 2011.

Losers
Tennessee: not quite as bad as long to Georgia State, but still bad. Tennessee were on their way against Brigham Young, up 13-3 at the half. Then, the unthinkable – almost unthinkable, anyway, because this is Tennessee we’re talking about – happened. The Vols coughed up their lead, allowing the Cougars to tie the game with a second left in regulation. And then win it, 29-26 in double overtime. The entire program seems allergic to winning these days. Jeremy Pruitt is going to have the week from hell. Again.

Washington: fell to Cal, 20-19 after a lengthy weather delay: upset of the week. A monumentally bad loss for the Huskies, for the second straight year against the Golden Bears, and a loss that is going to make the highly fancied team’s playoff aspirations very, very difficult to achieve. The defeat also snaps a run of 15 straight home wins.

Rutgers: the Scarlet Knights didn’t bother the scorers in Iowa City, losing 20-0 against the Hawkeyes, with the two quarterbacks who saw action McLane Carter and Arthur Sitkowski managing only 41 combined yards and two interceptions.

Nebraska: up 17-0 at half time on the road against old rivals Colorado, and despite controversial playmaker Maurice Washington just about going it alone – he had 77 rush yards to go with 188 receiving yards on four catches with one touchdown – lost in overtime, 34-31.

Florida State: yes, they won, which is more than can be said for last week’s second-half capitulation against Boise State, but it was a narrow 45-44 win over Louisiana-Monroe in overtime, and only because ULM missed an extra point. The victory will do absolutely nothing to quiet the unrest in Tallahassee.

UCLA: the Bruins fall to 0-2 in the second season of the much-hyped Chip Kelly era in Westwood, losing 23-14 to San Diego State in the Rose Bowl, out-gained 373-26 by the Aztecs, who could only manage a 6-0 win over FCS squad Weber State last week. That’s an ugly loss and the Bruins, who’ve started consecutive seasons 0-2 for the first time since 1942-43, are now staring down a 0-4 start, with Oklahoma and Washington State on the docket over the next two weeks.

Syracuse: so the Orange were ranked and their opponents, Maryland, were supposed to be one of the weaker Big Ten teams this year. Maybe it’s time to flip the script, because the Cuse were awful against the Terps, getting blown off the park 63-20. They have Clemson next week, and if there’s a similar defensive output, Lawrence and the Tigers might stack up 80.

Miami: the Hurricanes entered 2019 with high hopes of contending for an ACC title under head coach Manny Diaz. Instead, they’re 0-2 after losses to Florida and a resurgent North Carolina team. The Canes gave up the game-winning touchdown with 1:01 to play, meaning that they’ve lost their first two games of the season for the first time in 41 years.

Michigan State: wore the lime green uniforms that are an assault on the eyes. Never again, please. At least they won, beating Western Michigan 51-17. With those uniforms, they didn’t deserve to!

The Panthers and Patriots don't seem to like each other. 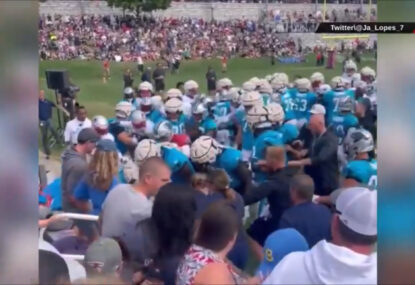